From Wikipedia, the free encyclopedia
Not to be confused with Maricopa, Arizona.
County in Arizona 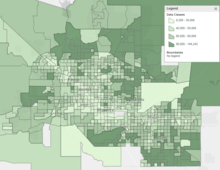 Median Household Income in 2015 across metro Phoenix; the darker the green, the higher the income [7] 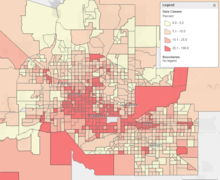 Percent of people living in poverty across metro Phoenix in 2016; the darker the red, the higher the concentration of poverty [8]

The Maricopa County Sheriff's Office provides court protection, administers the county jail, and patrols the unincorporated areas of the county plus incorporated towns by contract.

For much of the time after World War II, Maricopa County was one of the more conservative urban counties in the United States. While the city of Phoenix has leaned Democratic in recent years, most of the rest of the county was strongly Republican. Until 2020, every Republican presidential candidate since 1952 had carried Maricopa County. This includes the 1964 presidential run of native son Barry Goldwater, who would not have carried his own state had it not been for a 21,000-vote margin in Maricopa County. Until 2020, it was the largest county in the country to vote Republican. Since 1964, Democrats have held the margin within single digits only four times–in 1992, 1996, 2016, and 2020. In 2020, Joe Biden became the first Democrat in 72 years to win the county, which in turn, resulted in Arizona flipping to the Democratic column for the first time since 1996. [23] Furthermore, Biden became the first presidential candidate to win more than one million votes in the county. This makes Maricopa County the third county in American history to cast more than one million votes for a presidential candidate.

The county is considered a bellwether polity. [24]

Despite its political leanings at the time, Maricopa County voted against Proposition 107 in the 2006 election. This referendum, designed to ban gay marriage and restrict domestic partner benefits, was rejected by a 51.6–48.4% margin within the county, and statewide by a similar margin. Two years later, however, a majority of county residents voted to pass a successful state constitutional amendment banning same-sex marriage. The amendment was later invalidated by the Supreme Court's 2015 ruling in Obergefell v. Hodges, which declared that same-sex marriage is a fundamental right in the United States.

Unlike cities and towns in Arizona, counties are subordinate to the state and do not have charters of their own. The county Board of Supervisors acts in executive authority under powers delegated by state law. The state legislature devotes considerable time to local matters, with limited discretion granted to the Board of Supervisors for minor ordinances and revenue collection. The chairperson of the board presides for a one year term, selected by the board members during a public hearing.

The County Sheriff, County Attorney, County Assessor, County Treasurer, Superintendent of Schools, County Recorder, Constables, Justices of the Peace, and Clerk of the Superior Court are elected by the people. Retention of Superior Court Judges is also determined by popular vote.

The county's dominant political figure for over two decades (from 1993 to 2017) was Sheriff Joe Arpaio, who called himself "America's Toughest Sheriff" and gained national notoriety for his flamboyant and often controversial practices and policies. [27]

Maricopa County is home to 62 percent of the state's population, thus dominating Arizona's politics. For example, in the 2018 Senate election, Democrat Kyrsten Sinema carried the county en route to becoming the first Democrat to win a Senate seat in Arizona since 1988. [28] She won the county by over 60,000 votes, more than enough for the victory; she won statewide by 55,900 votes. [29] All but one of the state's nine congressional districts include part of the county, and five of the districts have their population center located there. Most of the state's prominent elected officials live in the county. Further underlining Maricopa County's political dominance, Biden's margin of 45,109 votes was more than enough to carry the state; he only won Arizona by 10,457 votes.

†Member was originally appointed to the office.

Other airports located in the county include:

In terms of freight rail, the Union Pacific Railroad and the Burlington Northern Santa Fe Railroad serve the county.

In terms of passenger rail, greater Phoenix is served by a light rail system. The county has no other passenger rail transport as Amtrak's Sunset Limited, which served Phoenix until June 2, 1996, has its closest stop in Maricopa in neighboring Pinal County. The train connects Maricopa to Tucson, Los Angeles, and New Orleans three times a week. However it does not stop in Phoenix itself.

The population ranking of the following table is based on the 2010 census of Maricopa County. [34] [35]