The George Washington and Jefferson National Forests are U.S. National Forests that combine to form one of the largest areas of public land in the Eastern United States. They cover 1.8 million acres (7,300 km2) of land in the Appalachian Mountains of Virginia, West Virginia, and Kentucky. Approximately 1 million acres (4,000 km2) of the forest are remote and undeveloped and 139,461 acres (564 km2) [2] have been designated as wilderness areas, which eliminates future development. 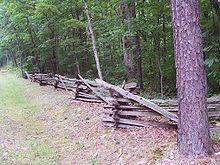 The Forests' vast and mountainous terrain harbors a great variety of plant life—over 50 species of trees and over 2,000 species of shrubs and herbaceous plants. [5]

The black bear is relatively common, enough so that there is a short hunting season to prevent overpopulation. White-tailed deer, bobcat, bald eagles, weasel, otter, and marten are also known to inhabit the Forests.

The forests are popular hiking, mountain biking, and hunting destinations. The Appalachian Trail extends for 330 miles (530 km) from the southern end of Shenandoah National Park through the forest and along the Blue Ridge Parkway. The forest is within a two-hour drive for over ten million people and thus receives large numbers of visitors, especially in the region closest to Shenandoah National Park.

George Washington Forest is also the venue for Nature Camp, a natural science education-oriented summer camp for youth. [12] The camp is located on national forest land near the town of Vesuvius, Virginia. It has operated at this location since the summer of 1953. [13]

Ranger offices are the Forest Service's public service offices. Maps and other information about the forests can be obtained at these locations. These offices are open Monday through Friday from 8:00 a.m. to 4:30 p.m. The Supervisor's Office in Roanoke is not located in the forest and is primarily an administrative location. [15]

District offices are listed from north to south. Counties are in Virginia unless otherwise indicated.

There are 139,461 acres (564 km2) [2] of federally designated wilderness areas in the two forests under the United States National Wilderness Preservation System. All are in the state of Virginia, except as indicated. The largest of these is the Mountain Lake Wilderness, at 16,511 acres (67 km2). There are 17 wildernesses in Jefferson National Forest, second only to Tongass National Forest, which has 19.

In 1999 the Wilderness Society conducted a review of lands in the Jefferson National Forest to look for large, intact areas that satisfy a need for backcountry recreation, ecological study, biodiversity, and the preservation of cultural history from early America. The report found 67 such areas and identified them as “Mountain Treasures”. [16] In 2012 The New River Group of the Sierra Club commissioned a study to review the status of these areas. Some of the areas had been converted into Wilderness Areas, while others had not received any special protection. [17] Areas in close proximity were grouped with nearby wilderness areas into eleven clusters. The clusters, from north to south, are:

The first camp of the Civilian Conservation Corps NF-1, Camp Roosevelt, [18] was established in the George Washington National Forest near Luray, Virginia. It is now the site of the Camp Roosevelt Recreation Area. [19]

In 2018-2019, protests occurred near Peters Mountain to block the Mountain Valley Pipeline. The 303-mile pipeline would transport natural gas through the Jefferson National Forest and cross the Appalachian Trail. [20] [21]