From Wikipedia, the free encyclopedia
Language given special status in some polity 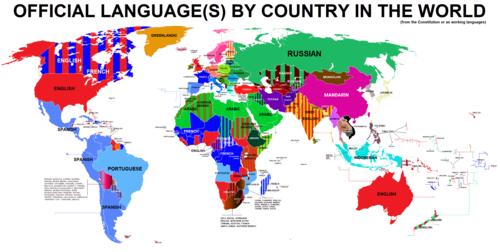 178 countries of the world recognize an official language, 101 of them recognizing more than one. The government of Italy officialised Italian only in 1999, [4] and some nations (such as the United States) have never declared official languages at the national level. [5] Other nations have declared non-indigenous official languages. "The Philippines and parts of Africa live with a peculiar cultural paradox. Although the official languages [in Africa] may be French or English, these are not the languages most widely spoken by [the country's] residents." [5]

Around 500 BC, when Darius the Great annexed Mesopotamia to the Persian Empire, he chose a form of the Aramaic language (the so-called Official Aramaic or Imperial Aramaic) as the vehicle for written communication between the different regions of the vast empire with its different peoples and languages.[ citation needed] Aramaic script was widely employed from Egypt in the southwest to Bactria and Sogdiana in the northeast. Texts were dictated in the native dialects and written down in Aramaic, and then read out again in the native language at the places they were received. [9]

The First Emperor of Qin standardized the written language of China after unifying the country in 221 BC. [10] Classical Chinese would remain the standard written language for the next 2000 years. Standardization of the spoken language received less political attention, and Mandarin developed on an ad hoc basis from the dialects of the various imperial capitals until being officially standardized in the early twentieth century.

According to an undated chart by the American pro-English-only organization known as U.S. English, 178 countries have an official language at the national level. Among those, English is the most common with 67 nations giving it official status. French is second with 29 countries, Arabic is third with 26 countries and Spanish is fourth with 21 countries, Portuguese is the official language of 10 countries and German is official in 6.

In accordance with Chapter 1, Article 16 of the Constitution of Afghanistan, the Afghan government gives equal status to Pashto and Dari as official languages.

After the independence of Bangladesh in 1971, the then Head of the State Sheikh Mujibur Rahman adopted the policy of 'one state one language'. [17] The de facto national language, Bengali, is the sole official language of Bangladesh according to the third article of the Constitution of Bangladesh. [18] The government of Bangladesh introduced the Bengali Language Implementation Act, 1987 to ensure the mandatory use of Bengali in all government affairs. [19]

Bulgarian is the sole official language in Bulgaria. [20]

Belarusian and Russian have official status in the Republic of Belarus.

Canadian advocates[ which?] of a single official language say it promotes national identity. [21] In Canada, debate has focused on whether the local majority language should be made the exclusive language of public business. In the Canadian province of Quebec, for example, laws restrict the use of the minority English in education, on signs, and in the workplace. [13]

According to the Finnish constitution, Finnish and Swedish are the official languages of the republic. Citizens have the right to communicate in either language with government agencies.

According to the Basic Law of Hong Kong and the Official Languages Ordinance, both Chinese and English are the official languages of Hong Kong with equal status. The variety of Chinese is not stipulated, however, Cantonese, being the language most commonly used by the majority of Hongkongers, forms the de facto standard. Similarly, Traditional Chinese characters are most commonly used in Hong Kong and form the de facto standard for written Chinese, however there is an increasing presence of Simplified Chinese characters particularly in areas related to tourism. [23] In government use, documents written using Traditional Chinese characters are authoritative over ones written with Simplified Chinese characters. [24]

Trilingual signboard in Odia, English and Hindi in Odisha state of India.
Further information: Languages of India and Languages with official status in India

The Constitution of India ( part 17) designates the official language of the Government of India as English as well as Standard Hindi written in the Devanagari script. [25][ need quotation to verify]

The Eighth Schedule of the Indian Constitution lists 22 languages, [26] which have been referred to as scheduled languages and given recognition, status and official encouragement. In addition, the Government of India has awarded the distinction of classical language to Tamil, Sanskrit, Kannada, Telugu, Malayalam and Odia.

On 19 July 2018, the Knesset passed a basic law under the title Israel as the Nation-State of the Jewish People, which defines Hebrew as "the State's language" and Arabic as a language with "a special status in the State" (article 4). The law further says that it should not be interpreted as compromising the status of the Arabic language in practice prior to the enactment of the basic law, namely, it preserves the status quo and changes the status of Hebrew and Arabic only nominally. [27]

Before the enactment of the aforementioned basic law, the status of official language in Israel was determined by the 82nd paragraph of the " Palestine Order in Council" issued on 14 August 1922, for the British Mandate of Palestine, as amended in 1939: [28]

All Ordinances, official notices and official forms of the Government and all official notices of local authorities and municipalities in areas to be prescribed by order of the High Commissioner, shall be published in English, Arabic, and Hebrew."

This law, like most other laws of the British Mandate, was adopted in the State of Israel, subject to certain amendments published by the provisional legislative branch on 19 May 1948. The amendment states that:

"Any provision in the law requiring the use of the English language is repealed." [29]

In most public schools, the main teaching language is Hebrew, English is taught as a second language, and most students learn a third language, usually Arabic but not necessarily. Other public schools have Arabic as their main teaching language, and they teach Hebrew as a second language and English as a third one. There are also bilingual schools which aim to teach in both Hebrew and Arabic equally.

Some languages other than Hebrew and Arabic, such as English, Russian, Amharic, Yiddish and Ladino enjoy a somewhat special status, but are not considered[ by whom?] to be official languages. For instance, at least 5% of the broadcasting time of privately owned TV-channels must be translated into Russian (a similar privilege is granted to Arabic), warnings must be translated to several languages, signs are mostly trilingual (Hebrew, Arabic and English), and the government supports Yiddish and Ladino culture (alongside Hebrew culture and Arabic culture).

The Constitution of Latvia (or Satversme) designated Latvian as the state language. In 2012 there was initiative to hold a referendum on constitutional amendments, elevating Russian as a state language. Kristīne Jarinovska in her analysis describes the proposal in the following way:

It proposed several constitutional amendments for introducing Russian as Latvia's second official language—i.e., amendments to the Satversme’s Articles 4 (on Latvian as the state language), 18 (on the solemn promise of a member of Parliament to strengthen the Latvian language), 21 (on Latvian as the working language of the Parliament), 101 (on Latvian as the working language of local governments), and 104 (on the right to receive a reply to a petition in Latvian). Obviously, the proposed amendments would have influenced other constitutional norms as well. Moreover, since Article 4 of the Satversme alike norms of independence, democracy, sovereignty, territorial wholeness, and basic principles of elections that form the core of the Satversme (according to Article 77 of the Satversme), the initiative, in fact, proposed discontinuing an existing state and establishing a new one that is no longer a nation-state wherein Latvians exercise their rights to self-determination, enjoying and maintaining their cultural uniqueness [30]

Low Saxon and Limburgish are languages acknowledged by the European Charter, and are spoken in specific regions of the Netherlands. [31]

The official language of Nigeria is English, which was chosen to facilitate the cultural and linguistic unity of the country. British colonisation ended in 1960.

Urdu is the national language of Pakistan. Urdu and English both are official languages in Pakistan. Pakistan has more than 60 other languages.

Russian is the official language of the Russian Federation and in all federal subjects, however many minority languages have official status in the areas where they are indigenous. One type of federal subject in Russia, republics, are allowed to adopt additional official languages alongside Russian in their own constitutions. Republics are often based around particular native ethnic groups, and are often areas where ethnic Russians and native Russian-language speakers are a minority.

South Africa has eleven official languages [11] that are mostly indigenous. Due to limited funding, however, the government rarely produces documents in most of the languages. Accusations of mismanagement and corruption have been leveled [34] against the Pan South African Language Board, which is in charge of maintaining the system. [12]

Mandarin is the most common language used in government. After World War II the mainland Chinese-run government made Mandarin the official language, and it was used in the schools and in government. Under the National languages development act, political participation can be conducted in any national language, which is defined as a "natural language used by an original people group of Taiwan", [35] which also includes Formosan languages, Hakka and Taiwanese Hokkien. According to Taiwan's Legislative Yuan, amendments were made to the Hakka Basic Act to make Hakka an official language of Taiwan. [36]

The official language of Ukraine is Ukrainian.

The de facto official language of the United Kingdom is English. In Wales, the Welsh language, spoken by approximately 20% of the population, has limited de jure official status. [37] [38]

English is the de facto national language of the United States. While there is no official language at the federal level, 32 of the 50 U.S. states [39] and all five inhabited U.S. territories have designated English as one, or the only, official language, while courts have found that residents in the 50 states do not have a right to government services in their preferred language. [40] Public debate in the last few decades has focused on whether Spanish should be recognized by the government, or whether all business should be done in English. [13]

The pro-English-only website U.S. English sees a multilingual government as one in which its "services actually encourage the growth of linguistic enclaves...[and] contributes to racial and ethnic conflicts". [43] Opponents of an official language policy in the United States argue that it would hamper "the government's ability to reach out, communicate, and warn people in the event of a natural or man-made disaster such as a hurricane, pandemic, or...another terrorist attack". [40] Professor of politics Alan Patten argues that disengagement (officially ignoring the issue) works well in religious issues but that it is not possible with language issues because it must offer public services in some language. Even if it makes a conscious effort not to establish an official language, a de facto official language, or the " national language", will nevertheless emerge. [13] Indeed, two-thirds of Americans believe that English is the United States' official language. [44]

Sometimes an official language definition can be motivated more by national identity than by linguistic concerns. When Yugoslavia dissolved in 1991, the country had four official languages— Serbo-Croatian, Slovene, Albanian and Macedonian. Serbo-Croatian was used as a lingua franca for mutual understanding and was also the language of the military.

When Croatia declared independence (1991) it defined its official language as Croatian, and Serbia likewise defined[ when?] its official language as Serbian. Bosnia-Herzegovina defined three official languages: Bosnian, Croatian, and Serbian. From the linguistic point of view, the different names refer to national varieties of the same language, which is known under the appellation of Serbo-Croatian. [45] [46] [47] It is said by some[ by whom?] that the Bosnian government chose to define three languages to reinforce ethnic differences and keep the country divided. [48] The language used in Montenegro, traditionally considered a dialect of Serbian, became standardized as the Montenegrin language upon Montenegro's declaration (2006) of independence.