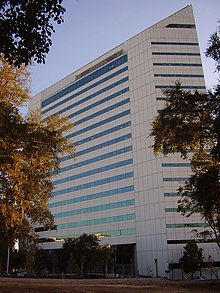 The Florida Department of Education (FLDOE) is the state education agency of Florida. It governs public education and manages funding and testing for local educational agencies ( school boards). It is headquartered in the Turlington Building (named for former education commissioner Ralph Turlington) in Tallahassee. [1]

The Florida commissioner of education manages the day-to-day operation of the department. The office of education commissioner was originally a Cabinet-level position filled by direct election and directly responsible for education in Florida. The 2002 Florida Constitution Revision Commission submitted a revision to the Florida Constitution, amending Article IV, Section IV to reduce the Cabinet from six elected officials to three. The voters approved the changes and it became effective January 7, 2003; after this time, the commissioner of education became an appointed position and the FLDOE became the overall responsibility of the governor. The revised constitution also created a new Florida Board of Education with seven members (one of whom is the commissioner of education), appointed by the governor to oversee the Department of Education. Division of Vocational Rehabilitation - 930 positions Division of Blind Services - 300 positions Annual operating budget for all entities in 2012-13 - approximately $18.6 billion Oversee 28 locally governed public state colleges and 47 school district technical centers

The superintendent of public instruction was established to oversee Florida's public schools in the 1868 Florida Constitution. The elected officeholder became the commissioner of education under the 1968 Florida Constitution. A constitutional amendment in 1998 made effective January 2003 reorganized the office so its head was no longer elected and created a State Board of Education. [3]

The State of Florida requires students to take the Florida Standards Assessments (FSA) each year in grades 3-10. Students' results from the FSA are compiled to generate a grade for each public school under former governor Jeb Bush's "A+ Plan." Under this plan, public schools receive a letter grade from A to F, depending on student performance and the degree to which the bottom 25% of the school has improved compared to its past performances. The higher a public school scores, the more funding it receives.

Students in third grade are required to pass the English/language arts portion of the test in order to be promoted to the fourth grade.

Students in Florida must also pass the tenth grade FSA in English/language arts and pass the Algebra 1 End-of-Course Assessment in order to be eligible to receive a high school diploma.

The department paid bonuses to teachers certified by the federal government. Up until 2010, the bonus was as much as $3,800 annually. This is expected to diminish with diminished income to the state. [4]