From Wikipedia, the free encyclopedia
Town in Virginia

Leesburg is the county seat of Loudoun County, Virginia. It was built in 1740, and it is occupied by some of Virginia’s most famous families, being named for Thomas Lee[ citation needed], ancestor of Robert E. Lee. In the War of 1812, it became the temporary seat of the United States government, and in the Civil War, it changed hands several times.

The town is situated at the base of Catoctin Mountain and adjacent to the Potomac River, 33 miles (53 km) northwest of Washington, D.C., for which it has largely become a commuter suburb. Its population was 42,616, as of the 2010 census. This makes it Virginia's largest incorporated town within a county (rather than being an independent city).

Leesburg is 33 miles (53 km) west-northwest of Washington, D.C. along the base of Catoctin Mountain and adjacent to the Potomac River. [5] Its population according to the 2016 United States Census was 52,607 [2] The town is also the northwestern terminus of the Dulles Greenway, a private toll road that connects to the Dulles Toll Road at Washington Dulles International Airport.

Leesburg, like the rest of Loudoun, has undergone considerable growth and development over the last 30 years, transforming from a small, rural, piedmont town to a suburban bedroom community for commuters to the national capital. Growth in the town and its immediate area to the east ( Lansdowne/ Ashburn) concentrates along the Dulles Greenway and State Route 7, which roughly parallels the Potomac River between Winchester to the west and Alexandria to the east.

Leesburg was named to honor the influential Thomas Lee and not, as is popular belief, his son Francis Lightfoot Lee who lived in Loudoun and brought up the bill to establish Leesburg, nor as is sometimes thought, Robert E. Lee (his great-grandnephew).[ citation needed] 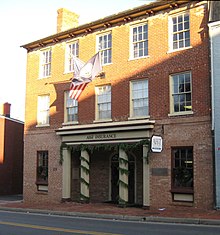 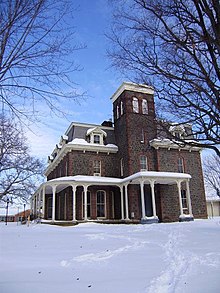 The historic Leesburg courthouse serves as the seat of government for Loudoun County, Virginia

Prior to European settlement, the area around Leesburg was occupied by various Native American tribes. John Lederer (1670) testified that the entire Piedmont region had once been occupied by the "Tacci, alias Dogi", but that the Siouan tribes, driven from the northwest, had occupied it for 400 years[ citation needed]. In 1699, the Algonquian Piscataway (Conoy) moved to an island in the Potomac in the environs of Leesburg, and were there when the first known Europeans visited what is now Loudoun. [6]

What would become known as the Old Carolina Road (present day U.S. Route 15) was a major route of travel between north and south for Native tribes. According to local historians, a pitched battle was fought near present Leesburg between the warring Catawba and Lenape tribes, neither of whom lived in the area. A war party of Lenape had traveled from their home in New Jersey and neighboring regions, all the way to South Carolina to inflict a blow on their distant enemies, the Catawba. As they were returning northward, a party of Catawbas overtook them before they reached the Potomac, but were defeated in a pitched battle two miles (3 km) south of Leesburg. The surviving Lenape buried their dead in a huge burial mound, and early settlers reported that they would return to this mound to honor their dead on the anniversary of this battle for many years thereafter. The date of this conflict is unknown, but it seems the Lenape and Catawba were indeed at war in the 1720s and 1730s. [7]

European settlement of near Leesburg began in the late 1730s as tidewater planters moved into the area from the south and east establishing large farms and plantations.[ citation needed] Many of the First Families of Virginia were among those to settle in the area including the Carters, Lees and Masons.[ citation needed] The genesis of Leesburg occurred sometime before 1755 when Nicholas Minor acquired land around the intersection of the Old Carolina Road and the Potomac Ridge Road (present day Route 7) and established a tavern there.[ citation needed] Despite lack of growth around the tavern, upon Loudoun's formation in 1757, Minor dubbed the sparse collection of buildings about his tavern "George Town" in honor of the reigning monarch of Great Britain.[ citation needed] The village's prosperity changed the following year when the British Colonial Council ordered the establishment of the county Court House at the crossroads.[ citation needed] Accordingly, Minor had a town laid out on the traditional Virginia plan of six criss-cross streets. On October 12 of that year (1758) the Virginia General Assembly founded the town of Leesburg upon the 60 acres (0.24 km2) that Minor laid out. [6] Leesburg was renamed to honor the influential Thomas Lee and not, as is popular belief, his son Francis Lightfoot Lee who lived in Loudoun and brought up the bill to establish Leesburg, nor as is sometimes thought, Robert E. Lee (his great-grandnephew). [8] When the post office was established in Leesburg in 1803 the branch was named "Leesburgh"; the 'h' persisted until 1894. [6]

During the War of 1812, Leesburg served as a temporary haven for the United States Government and its archives (including the Declaration of Independence and the U.S. Constitution and portraits of early American leaders like Benjamin Franklin) when it was forced to flee Washington, D.C. in the face of the British Army[ citation needed]. Some websites have claimed that this resulted in Leesburg temporarily becoming the capital of United States, however these claims are not true as none of the U.S. Government bodies were present in Leesburg at the time. [9] When reconstruction began on the Capitol, Potomac Marble from quarries just south of Leesburg was used. [6]

Early in the American Civil War Leesburg was the site of the Battle of Ball's Bluff, a small but significant Confederate victory. The battlefield is marked by one of America's smallest national cemeteries. The town frequently changed hands over the course of the war as both armies traversed the area during the Maryland and Gettysburg campaigns. The Battle of Mile Hill was fought just north of the town prior to its occupation by Robert E. Lee in September 1862. [10] Leesburg also served as a base of operations for Col. John S. Mosby and his partisan Raiders. Some people consider the local courthouse among the few courthouses in Virginia not burned during the Civil War (1861–1865); though it was not built until 1894.

In the 20th century, Leesburg was the home of World War II General George C. Marshall, architect of the famous Marshall Plan that helped re-build Europe after the war, and radio personality Arthur Godfrey, who donated land for the town's first airport.

Today Leesburg continues to serve as the center of government and commerce for Loudoun County. The town's Historic District was placed on the National Register of Historic Places in 1970 and cited as one of the best preserved and most picturesque downtowns in Virginia. [11] Downtown merchants have recently labeled themselves "Loudoun's (or, Loudoun County's, depending on the audience) Original Town Center," largely in response to the growing number of mixed-use shopping in proximity. [12] Leesburg has served as the Loudoun county seat continuously since the county's formation in 1757. [13]

The Leesburg area contains 21 entries on the National Register of Historic Places, including:

At least 63 historic markers are located in and near Leesburg. [18]

According to the United States Census Bureau, the town has a total area of 12.5 square miles (32.3 km2), nearly all of it land.

Leesburg is located in the northern Virginia Piedmont at the base of the easternmost chain of the Blue Ridge Mountains, Catoctin Mountain. The town is an area of the Piedmont known as the Culpeper Basin (an inland sea during the Jurassic period) and is also in the valley of the Potomac River, so that the overall relief is much less dramatic than other Virginia Piedmont towns[ citation needed]. Elevation in town ranges from about 350 feet (110 m) to 400 feet (120 m), though portions of western Leesburg along the foot of Catoctin Mountain may be considerably higher. The principal drainage for the town is Tuscarora Creek and its northern branch, referred to as the Town Branch, which empties into Goose Creek just east of the town.

The Leesburg Volunteer Fire Company provides fire protection services. [23] The Loudoun County Volunteer Rescue Squad provides rescue and emergency medical services. [24] Both the fire company and rescue squad are volunteer organizations supplemented with partial staffing from the Loudoun County Department of Fire, Rescue and Emergency Management. [25] The fire company can trace its roots back to 1803; the rescue squad was formed in 1952. [26]

Leesburg is also served by a town police department. [27]

The Loudoun Times-Mirror is a Leesburg-based weekly newspaper serving Loudoun County. There are no longer any local radio stations after the former WAGE (now WCRW) was shut down in 2007. Leesburg is assigned to the Washington, D.C. media market, and is covered by its major television and radio stations; broadcasters from Baltimore, Frederick, and Winchester are also readily available. 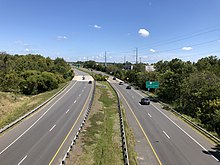 US 15 enters Leesburg from the southwest, following King Street, then joins the Leesburg Bypass to pass southeast of downtown. It rejoins King Street as it leaves the bypass on the northeast end of town on its way toward Maryland. The old alignment of US 15 is now U.S. Route 15 Business. Via US 15, travelers can reach Warrenton to the southwest and Frederick to the northeast.

SR 7 enters Leesburg from the west along Market Street and immediately joins the Leesburg Bypass to pass southwest of downtown. It rejoins Market Street as it leaves the bypass southeast of downtown. The old alignment of SR 7 is now Virginia State Route 7 Business. SR 7 provides connections to Winchester to the west and Alexandria to the southeast.

SR 267 enters Leesburg from the south along the Dulles Greenway and terminates at the Leesburg Bypass (US 15 and SR 7). SR 267 functions as a high speed bypass of SR 7 southeast of Leesburg, but is also a toll road.

Leesburg operates the Leesburg Executive Airport at Godfrey Field, which serves Loudoun County with private and corporate aircraft operations. A designated reliever airport for Dulles International, the airport accounts for nearly $78 million per year in economic impact according to a 2011 study by the Virginia Department of Aviation. [28] It is home (as of 2005) to over 240 aircraft, and hosts 20–30 jet operations per day. The airport was built in 1963 to replace the original Leesburg airport, which Arthur Godfrey owned and referred to affectionately as "The Old Cow Pasture" on his radio show.[ citation needed] Godfrey, who, by the early 1950s, had purchased the Beacon Hill Estate west of Leesburg, used a DC-3 to commute from his farm to studios in New York City every Sunday night during the 1950s and 1960s. His DC-3 was so powerful and noisy that Godfrey built a new airport, funding it through the sale of the old field.[ citation needed] Originally named Godfrey Field, it is now known as Leesburg Executive Airport at Godfrey Field.

Also located near Leesburg is the National Conference Center, [29] which the Xerox Corporation built in the 1970s. Government entities and private business use the Conference Center for meetings and conferences. Three main focal points connect this maze of underground buildings, one of which is currently the headquarters of Civilian Police International, [30] a government sub-contract company.

Market Station, located in the southeast portion of Leesburg's Historic District, contains a number of high-tech and legal offices, retail shops, and restaurants that are housed within seven restored historic buildings (a railroad freight station, a railroad stationmaster's house, a log house, two barns and two gristmills, some of which were reconstructed in or relocated to the site. [31] A plaza on the east side of the site contains several structures painted in the yellow and green colors of the stations of the Washington and Old Dominion Railroad, which served the town until 1968.

According to Leesburg's FY 2019 Comprehensive Annual Financial Report, [33] the top employers in the town are: