Front Royal is the only incorporated town in Warren County, Virginia, United States. The population was 14,440 at the 2010 census. [5] It is the county seat of Warren County. [6]

Several theories regarding the origins of the name "Front Royal" have been suggested.

A common theory is that the town was named for a giant oak tree – the "Royal" Tree of England – that stood in the public square during colonial days where Chester and Main Streets now join. It was there that the local militia were drilled. During drills, a frequent command given by the drill sergeant was, "front the Royal Oak!" The command was repeated and eventually shortened to simply "Front Royal". [7] [8] This theory is supported by a bulletin published by the United States Geological Survey in 1905, which states that the town was first known as Royal Oak, with the current name being derived from the commands of a confused colonel. [9]

A second account holds that when local militia were stationed around the town during the American Revolution, the sentry would call out "Front", to which the required entry password was to respond "Royal". Eventually their military post became known as "Camp Front Royal". [7] [10]

A third version holds that, in early decades of European settlement, the area was referred to in French as "le front royal", meaning the British frontier. French settlers, trappers, and explorers in the Ohio Country of the mid-18th century were referring to the land grant made by King Charles II, then in control of Thomas, Lord Fairfax, Baron of Cameron. In English, "le front royal" is translated to the "Royal Frontier". The British themselves may have called the area "Front Royal" after 1763, when they set the so-called Proclamation Line along the spine of the Alleghenies to demarcate the settled portion of the colonies from the Indian Reserve in the interior.[ citation needed] 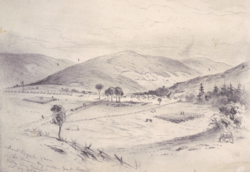 The entire Shenandoah Valley including the area to become Front Royal was annexed and claimed for hunting by the Iroquois Confederation during the later Beaver Wars, by 1672. Some bands of the Shawnee settled in the area as client groups to the Iroquois and alternately to the Cherokee after 1721. The Iroquois formally sold their entire claim east of the Alleghenies to the Virginia Colony at the Treaty of Lancaster in 1744. [11] Front Royal, originally settled in 1754 under the name LeHewtown, had been known to European explorers as early as the 1670s, and the nearby settlement of Chester's Ferry was in existence by 1736. The town also had a well-known nickname by the 1790s, "Helltown," due to the many livestock wranglers and boatmen on the Shenandoah coming through the area, who came into town looking for alcohol. It was incorporated as "Front Royal" in 1788.

Rail service was established in 1854 with the construction of the Alexandria, Orange and Manassas Gap Railroad between Manassas and Riverton. This line was soon extended to Strasburg in time to become a factor in the Battle of Front Royal on May 23, 1862 and throughout the Civil War. Lumber, agriculture, manufacturing and grain mills provided employment in the region for decades after the Civil War. 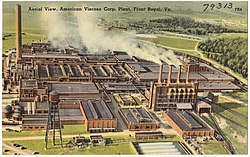 The American Viscose rayon plant, once Front Royal's principal employer, with 3,000 workers at its peak, operated between the 1930 and 1989. The plant manufactured rayon for tires during World War II and later produced rayon for rocket nozzles for the Defense Department and the National Aeronautics and Space Administration. [12] 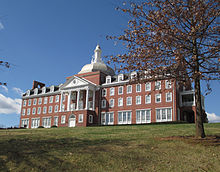 Sonner Hall at Randolph-Macon Academy is listed on the National Register of Historic Places.

Within Front Royal, the following buildings, properties and districts are listed on the National Register of Historic Places: [13]

In 2019, the Warren County Economic Development Authority was embroiled in a massive financial scandal that some observers have characterized as the largest embezzlement scheme in the history of the state of Virginia. [14] The fraud scheme, which involved the alleged embezzlement of $21 million in county funds through fictitious development schemes and insider deals, was uncovered by the Virginia State Police Bureau of Criminal Investigation's Culpeper Field Office, which launched a probe in 2018 into the business practices of the EDA in conjunction with the Front Royal Police Department and the Federal Bureau of Investigation. [14] 14 current and former municipal officials were indicted and are facing criminal charges, including the entire Warren County board of supervisors as well as the former Warren County Attorney and the head of the Warren County schools division. [14] [15]

Front Royal is located at the confluence of the North and South Forks of the Shenandoah River. [17]

Front Royal experiences a Humid subtropical climate, with summer highs in the low to mid 80s and winter lows in the upper 20s. Front Royal averages 41 inches of precipitation per year, with 24 inches of snowfall per year. [18]

Front Royal is governed by a mayor and six-member town council with four-year terms. The current government of Front Royal, as of January 2020, [19] [20] is listed below.

The gazebo at the Village Commons in Front Royal

Front Royal is the home of Randolph-Macon Academy (founded 1892) which features an Air Force JROTC program. Front Royal is also the home of Christendom College and the Smithsonian Conservation Biology Institute (SCBI). Along with these institutions are the two rival high schools, Skyline High School and Warren County High School.

Front Royal is home to the 440-acre (1.8 km2) Avtex Fibers Superfund Site. Once Virginia's largest Superfund site, remediation activities at this former rayon manufacturing facility have been ongoing since 1989. The site is intended to eventually house a 175-acre (0.71 km2) eco-friendly office park, 30 acres (120,000 m2) of soccer fields, and 240 acres (0.97 km2) of conservancy park along the Shenandoah River. [27] The plant, which was built by the American Viscose Corporation in the 1930s and at one time employed nearly 3,500 workers, was closed in 1989 after being cited for more than 2,000 environmental violations over five years, including emissions of polychlorinated biphenyls (PCBs) into the Shenandoah River. [28] [29] The plant's main buildings were demolished in 1997 as part of the cleanup. [30]

Front Royal is also home to the U.S. Customs and Border Protection's Canine Center Front Royal (CCFR), formerly known as the Canine Enforcement Training Center (CETC). [31] This facility has trained dogs and their handlers in various detection abilities for federal and law enforcement agencies since 1974. [32]

Important tourist attractions include Skyline Caverns, the northern entrance to Shenandoah National Park, and Skyline Drive, which were both created during the Great Depression. It also has a large number of American Civil War attractions, both in the town and the surrounding Shenandoah Valley.

The Front Royal Cardinals baseball team joined the Valley League in 1984. Games are played in Bing Crosby Stadium. Bing Crosby helped raise funds for the building of the original stadium by arranging for his film " Riding High" to have its world premiere in Front Royal on April 1, 1950. Crosby's initial involvement came about on April 30, 1948 when after acting as grand marshal of the Grand Feature Parade of the 21st. Shenandoah Apple Blossom Festival in Winchester, Virginia, he went on to Front Royal where he sang on the courthouse steps as part of a concert to help raise money for a new stadium. Bing was the first contributor to the Front Royal Recreation Center Building Fund when he donated $1,000. On April 1, 1950, Front Royal celebrated "Bing Crosby Day" and starting at 11 a.m., Crosby led a two-hour parade through the streets in front of a crowd of 20,000 to Recreation Park for the dedication of the baseball stadium. Park Theater was the venue for the official world premiere of Riding High at 8:30 p.m. where Crosby entertained the audience with several songs. During his appearance at the Park Theater, Bing wrote out a personal check for $3,595 to bring the gross receipts of the day to $15,000. [33]

In 1953, Frank Nesbitt coached a Little League team from Front Royal which came in 3rd in the world tournament. Freddie Moore was one of the players on that team, and later became active in Front Royal Little League. After Moore died of cancer one of Front Royal's Little League fields was named in his honor.

The Confederate Museum on Chester Street has many interesting artifacts from the 1860s, as have the museum buildings of the Warren Heritage Society, the Ivy Lodge (c. 1859), the Belle Boyd Cottage (c. 1836) and the Balthis House (c. 1788).

Front Royal was designated the "Canoe Capital of Virginia" in February 1999. [34]

Front Royal is located at the intersection of US 340 and US 522. SR 55 also passes through Front Royal. I-66 passes just north of Front Royal.

Together with the County of Warren, it owns and manages the Warren County Economic Development Authority, an independent agency that is responsible for promoting economic development within the county and town.

Three radio stations and two weekly newspapers are based and licensed to Front Royal.