Beginning in 1964, first coho and then chinook salmon were stocked in Lake Michigan. [8] New salmon and trout fingerling stocking in the spring and egg and milt collection from late September to early November takes place at the C.D. "Buzz" Besadny Anadromous Fish Facility. The facility is a public attraction.

In recent years there has been concern that the alewife population will not support the salmon population, [9] especially as the Chinook population has already collapsed in Lake Huron. [10] A 2016 survey of Wisconsin anglers found they would on average pay $140 for a trip to catch Chinook salmon, $90 for lake trout, and $180 for walleye. [11] Should the Chinook salmon fishery be replaced with a native lake trout fishery, the economic value would decrease by 80%. [12]

A 1995 study found the greatest abundance of spawning lake trout in Lake Michigan was on the Clay Banks Reef off of Door and Kewaunee counties. [13]

The sucker run, which was a popular fishing event in the 19th century, [14] occurs in March and April. [15] Suckers may be taken by frame dip nets, [16] and the sucker run is also sought out as viewing opportunity. [17] The smelt run also attracts fishermen. [18]

The state recognizes 11 public boat access sites. [19] There are 14 inland lakes or ponds in Kewaunee County. In 2012, there were 2,252 registered boats in the county. [20] Algoma Light and Kewaunee Pierhead Light are active navigational aids for boaters. The Daniel Lyons shipwreck near Algoma is used as a dive site, but the America near Carlton is less visited by divers due to its remote location. [21] There are 24 other known shipwrecks in county waters. [22] The Tug Ludington in Kewaunee is operated as a museum boat.

Parks and other lands open to the public

The county operates eight parks. The Dana Farm (childhood home of Ransom Asa Moore) was relocated to the Winter Park. Along with the Bruemmer Park and Zoo, it is located near the state-owned C.D. Buzz Besadny Fish Hatchery. [23] Two other state-owned parks are Mashek Creek Public Access [24] and the Brusky Wildlife Area. [25] There are also 27 municipal parks operated by the cities of Algoma, Kewaunee, and the Village of Luxembourg. [26]

There are four public beaches in the county, three of which are routinely monitored for water quality advisories. [27]. The county [28] and the city of Algoma [29] each operate one beach. Kewaunee operates two beaches, [30] There are boardwalks along the beach in Algoma and the Kewaunee Marshland Walk.

Limestone kiln remnants of historical interest are open to the public at the Bruemmer Park and Zoo. Although lime is not presently produced in Kewaunee County, as of 2016, there were 9 active gravel pits producing sand and gravel for roadwork and construction use. [31]

Hundreds of acres of privately owned land are open to the public for hunting, fishing, hiking, sight-seeing and cross-country skiing under the Managed Forest Program. [32]

From 1996 to 2001, researchers listed 48 species of snails in Kewaunee County, ranking eighth out of the 22 counties in the study. Nearby Door and Brown counties ranked first and second with 69 and 62 species respectively. However, they only sampled 13 areas in Kewaunee County, compared to 74 areas in Door and 28 areas in Brown. Slugs were found in all three counties. [40]

In 2018 statistics, a county total of 3,527 deer were killed as a total of all deer hunting seasons, down from the total harvest of 3,787 deer for 2017 statistics. [42] In 2017, Kewaunee and Door counties were reported to have equal deer-to-human ratios. Kewaunee County had the third highest cow-to-human ratio in the state, with only Lafayette and Buffalo counties having higher ratios. [43] In 2018, there were an estimated 97,000 head of cattle in the county, more than Door County which had 23,500 head of cattle. [44]

Kewaunee County is known for its kolache. [45] Another distinctive local food is booyah. [46] [47] The cooking of booyah is not exclusive to Belgians, but has also been adopted by some Czechs. [48]

Tourism supports an arts community, including papermaking, [55] sculpture, [56] and painting. [57]

According to the U.S. Census Bureau, the county has a total area of 1,084 square miles (2,810 km2), of which 343 square miles (890 km2) is land and 742 square miles (1,920 km2) (68%) is water. [62] The northern part of the county is on the Door Peninsula between Green Bay and Lake Michigan. The northern part of the Kettle Moraine extends into Kewaunee County. There are three named peaks in the county. [63] The USGS monitors one well in the county on an hourly basis. It also takes hourly pictures of the field in front of the well. [64] It usually takes four to five hours for the groundwater level to rise after a big rain. [65] 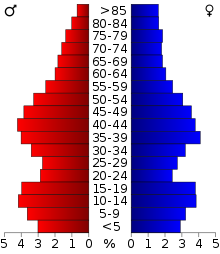 According to calculations based on 2010–2014 data, children born in Kewaunee County have a life expectancy of 82.0 years, the highest out of all 72 Wisconsin counties. [90] From 2000-2010, the county premature death rate of persons younger than 75 years old fell 38.3%, the greatest reduction out of all Wisconsin counties. [91] In 2015, 89.1% of babies born in the county had a normal birth weight, compared to 92.6% for the state. The substance abuse and preventable hospitalization rates for the county were lower than for the state as a whole. [92] Five-year ACS estimates for 2012-2016 found that that Kewaunee County tied with 23 other counties in having the 675th lowest percentage of disabled residents under 65 years old out of all 3,145 US counties. 9.7% were disabled. [85]

In a study of car accident data from 1992 to 2001, the risk of incurring a severe traffic injury during a stretch of driving was found to be higher in Kewaunee County than in Door County, but Kewaunee County had less fatalities per 100 people severely injured than Door County. This was thought to be due to the shorter distance it took to get people injured in Kewaunee County to treatment, as the nearest hospital with a high level of trauma certification was St. Vincent Hospital in Green Bay. [95]

PCBs from Green Bay have been deposited into the county as windborn dust [96] and off of contaminated waters. [97]

The only superfund site in the county is the former Algoma Municipal Landfill. [98]

Between 2010 and 2018, there were 76 state-documented manure spills in the county. [101] The likelihood of well water contamination differs depending on which area of the county the well is located, as some areas have thicker layers of soil than others. [102] An electronic map marks the locations of every septic system and drain field, along with situations more liable to spread fecal contamination, such as areas with a shallow water table, high permeability, or likely to have karst features. [103] A different electronic map shows the locations of private wells polluted with nitrates and other contaminants down to the section level. [104] Another factor is tile drainage, as relatively high amounts of phosphorus were documented from water coming from two tiled sites located on a Kewaunee County farm between 2005 and 2009. The quick drainage reduces the filtration of nutrients out of the water and into the soil. [105] The distribution of bacterial contamination in private wells has been mapped. [106] Some bacteria found in surface water have genes for antibiotic resistance. This is thought to be due to the bovine use of antibiotics. [107] 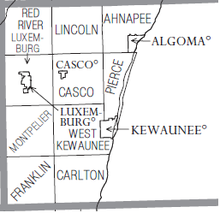 In 1795, Jacques Vieau established a short-lived trading post in Kewaunee. [108]

Simon Kahquados, the last known Chief of the Wisconsin Potawatomi, was born in the county in 1851. [109] Later on he lived in Mishicot.

19th-century Algoma (at the time called Ahnapee) was host to a longstanding inter-ethnic economic struggle over pier pricing and access. [111]

In 1887, an octahedrite meteorite weighing nearly nine pounds was plowed up four miles west of Algoma. [112] It is displayed at the Geology Museum at UW–Madison. [113]

The first Belgian Kermiss harvest festival in the nation is thought have taken place in the county. [115]

For lists of notable people from Kewaunee County, see the following articles: