Wauwatosa ( /ˌwɔːwəˈtoʊsə/; originally Wau-wau-too-sa or Hart's Mill) is a city in Milwaukee County, Wisconsin, United States. The population was 46,396 at the 2010 census. Wauwatosa is located immediately west of Milwaukee, and is a part of the Milwaukee metropolitan area. It is named after the Potawatomi Chief Wauwataesie and the Potawatomi word for firefly. [6]

The lush Menomonee Valley of the Wauwatosa area provided a key overland gateway between the rich glacial farmland of southeastern Wisconsin and the Port of Milwaukee. In 1835, Charles Hart became the first Euro-American to settle here, followed that year by 17 other families. The following year a United States Road was built from Milwaukee through Wauwatosa, eventually reaching Madison. Charles Hart built a mill in 1845 on the Menomonee River which gave the settlement its original name of "Hart's Mill." The mill was torn down in 1914. [7]

The Town of Wau-wau-too-sa was created by act of the Wisconsin Territorial Legislature on April 30, 1840. As of the 1840 census, the population of the Town of Wau-wau-too-sa or Wauwatosa was 342. [8] The town government was organized in 1842. The town's borders originally extended from the present-day Greenfield Avenue in the south to Hampton Avenue in the north, and from 27th Street in the east to the Waukesha County line in the west, encompassing sections of present-day Milwaukee, West Milwaukee and West Allis, plus the southern part of former North Milwaukee, which was wholly annexed into the city of Milwaukee in 1927. Most of the town was farmland through the remainder of the 19th century.

In 1849 the Watertown Plank Road was constructed through Wauwatosa, mainly following the old Madison territorial road. In 1851 Wisconsin's first railroad (later The Milwaukee Road) established Wauwatosa as its western terminus. The Village of Wauwatosa was incorporated from the central part of the Town of Wauwatosa in 1892, and was rechartered as the City of Wauwatosa on May 27, 1897. [9]

Robertson Ace Hardware Building; one of the original buildings in Wauwatosa

On November 25, 1952, the City of Wauwatosa more than doubled its size by annexing 8.5 square miles (22 square kilometers) of land west of the Menomonee River, the entire remaining portion of the Town of Wauwatosa, [10] which became the home to several large cold storage and regional food distribution terminals. Industrial plants owned by firms including Harley-Davidson and Briggs & Stratton were also constructed.

In the past 40 years, western Wauwatosa has become an edge city with an important commercial and retail district built up along Milwaukee's beltline Highway 100 and anchored by the Mayfair Mall.

Wauwatosa received some national attention in 1992 when the Wauwatosa Common Council, threatened with a lawsuit, decided to remove a Christian cross from the City's seal adopted in 1957. The cross was replaced with the text, "In God We Trust." The seal itself was designed by 9-year old Suzanne Vallier as an entry in a contest among Wauwatosa schoolchildren. The quadrants of the logo's shield represent, from top left going clockwise; an arrowhead representing the Indians who were the original inhabitants of the city, the mill representing Hart's Mill which was the original name of the city, the cross representing the "city of churches", and the symbol used on street signs representing the "city of homes." [11]

Eastern Wauwatosa is also known for its homes and residential streets, at one time just a short streetcar ride away from downtown Milwaukee. Prior to the arrival of Dutch elm disease, many of Wauwatosa's older residential streets had large gothic colonnades of American Elm trees. In Wauwatosa, the Menomonee Valley made it easier to quarry portions of the Niagara Escarpment, which provided the necessary materials for sturdy, cream-colored bricks and stout, limestone foundations used in many homes and public buildings throughout the region.

There were 20,435 households of which 27.6% had children under the age of 18 living with them, 47.2% were married couples living together, 8.2% had a female householder with no husband present, 3.2% had a male householder with no wife present, and 41.4% were non-families. 34.3% of all households were made up of individuals and 14.5% had someone living alone who was 65 years of age or older. The average household size was 2.23 and the average family size was 2.92.

Wauwatosa has a mayor–council government. The mayor is elected to a four-year term.

The Common Council is composed of 16 aldermen, two from each of eight districts. They serve four-year terms, with one member from each district up for election every other year. The aldermen set policy and have extensive financial control, but are not engaged in daily operational management.

Wauwatosa voters have supported both Democratic and Republican candidates.

Wauwatosa is served by the Wauwatosa School District: [19] 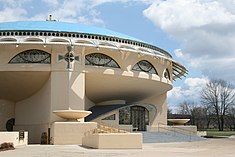 Church of the Annunciation in Wauwatosa, designed by Frank Lloyd Wright

Wauwatosa contains Milwaukee County's Regional Medical Center, which includes the Medical College of Wisconsin, the Children's Hospital of Wisconsin, and Froedtert Hospital, one of two level-one trauma centers in the state. Other points of interest are the Annunciation Greek Orthodox Church designed by Frank Lloyd Wright; and the Memorial Center, built in 1957, which contains the public library, an auditorium, and the city hall. The Washington Highlands Historic District, a residential neighborhood designed in 1916 by renowned city planner Werner Hegemann, was added to the National Register of Historic Places in 1989, as was the Kneeland-Walker House. The Milwaukee County School of Agriculture and Domestic Economy Historic District, located on a former high school campus, was added in 1998. Other buildings on the list include Wauwatosa's oldest house, the Lowell Damon House; the Thomas B. Hart House; and the Wauwatosa Woman's Club Clubhouse.

In July 2019, the Tourism Commission of Wauwatosa sponsored the installation of several new murals by professional artists. ' [20] The murals are curated by Milwaukee-based public arts agency Wallpapered City, and the artworks appear on buildings from 64th Street to 70th Street along North Avenue.' [21]

Wauwatosa is the home town of the narrator of an unrecorded song by Bob Dylan, "On, Wisconsin" (not to be confused with the University of Wisconsin fight song of the same name). [22] The lyrics were written by Dylan in 1961 and finished in 2018 by local musician Trapper Schoepp. Schoepp wrote music to accompany Dylan's lyrics and recorded the song at Wauwatosa's Wire & Vice studio for his album Primetime Illusion. [23] [24]