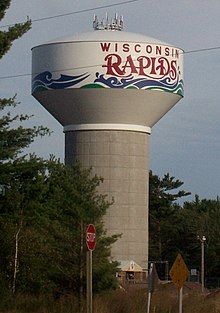 Wisconsin Rapids is a city in and the county seat of Wood County, Wisconsin, United States. [7] The population was 18,367 at the 2010 census.

According to the 2010 census, the Wisconsin Rapids micropolitan area was home to 54,362 people. The city also forms one of the core areas of the United States Census Bureau's Marshfield-Wisconsin Rapids Micropolitan Statistical Area, which includes all of Wood County (2000 population: 75,555).

The American Indians called the area "Ahdawagam", meaning "Two-sided Rapids". Although Europeans began to settle this area in the 1830s, Wisconsin Rapids has been known by this name only since 1920. Prior to that, the community was divided by the Wisconsin River, with the west side incorporated as Centralia and the east side as Grand Rapids. The two cities merged in 1900, with the entire community taking the name Grand Rapids. [8] The name was changed in 1920 to avoid mail and other goods from being misdirected to the much better known Grand Rapids, Michigan. [9]

There were 8,296 households of which 27.1% had children under the age of 18 living with them, 39.1% were married couples living together, 11.9% had a female householder with no husband present, 4.8% had a male householder with no wife present, and 44.2% were non-families. 38.7% of all households were made up of individuals and 16.8% had someone living alone who was 65 years of age or older. The average household size was 2.17 and the average family size was 2.87.

There were 7,970 households out of which 28.0% had children under the age of 18 living with them, 46.0% were married couples living together, 10.6% had a female householder with no husband present, and 40.0% were non-families. 34.8% of all households were made up of individuals and 16.0% had someone living alone who was 65 years of age or older. The average household size was 2.26 and the average family size was 2.93.

Known for its papermaking history, Wisconsin Rapids is also an important locale for the cranberry industry. Wisconsin Rapids is the corporate home of the international educational software company, Renaissance Learning, Inc. as well as other national and global companies.[ citation needed]

From its founding in 1894, Wisconsin Rapids was home to the corporate headquarters of Consolidated Papers, Inc, which was acquired by the Finnish company Stora Enso in early 2000. [13] In 2007, NewPage Corporation acquired the paper production facility. [14] In 2015, Verso Corporation acquired the mill. [15] Verso continues its presence in the area with a paper mill that houses two paper machines and a kraft pulp mill. In June of 2020, Verso announced the closing of their paper mill, with the resulting loss of 900 jobs. [16]

Mid-State Technical College, which has a campus in the city, offers vocational diplomas, and Lakeland University offers qualifications in academic subjects.

McMillan Memorial Library serves Wisconsin Rapids and southern Wood County. McMillan was a Finalist for the 2019 National Medal for Museum and Library Service.

There are three museums, the South Wood County Historical Corporation Museum, the Alexander House, and the Wisconsin River Paper Making Museum, all of which are housed in historical family homes.

The Wisconsin Rapids Riverkings are a hockey team who is a member of the United States Premier Hockey League and won the Midwest Elite Championship in the 2016 - 2017 season. The Riverkings currently play their home games at the SWCRC.

The Wisconsin Rapids Rafters are a collegiate summer baseball team who are a member of the Northwoods League. The Rafters won the league championship in 2016. They currently play their home games at Witter Field.

There is a municipal zoo.

There is a prairie chicken sanctuary at the Buena Vista Wildlife Reservation, and every year the Prairie Chicken Festival is held.

The Souper Snow Sculpture Spectacular that takes place every February is one of the largest snow sculpture competitions in the country by numbers of sculptures.

The Grand Affair Arts Festival takes place in September of each year.