Wood County is a county located in the U.S. state of Wisconsin. As of the 2010 census, the population was 74,749. [1] Its county seat is Wisconsin Rapids. [2] The county is named after Joseph Wood, a member of the Wisconsin State Assembly. [3]

Wood County spans two of Wisconsin's five geographical regions. The northern part of the county is in the Northern Highlands, with mostly rich cropland with heavy clay soil, used for corn, soybeans, hay and dairy. [6] In the northwest corner the Marshfield moraine runs from Marathon County through Marshfield, Bakerville and Nasonville into Clark County. [7] The south and central areas from Babcock through Cranmoor and Wisconsin Rapids are in the Central Plain, flat and marshy - one of the major cranberry-producing centers of the United States. [6] The Wisconsin River cuts across the southeast corner, a corridor of sand flats, islands and oxbows. The river falls about 120 feet as it flows through the county, [8] [9] driving several power dams. The remainder of the county is drained by smaller streams and rivers, punctuated by isolated hills like Powers Bluff.

The flat, sandy southern third of the county was largely shaped by the last glacial advance. The ice didn't reach Wood County, but it approached from the east into Portage County and butted up against the Baraboo Hills to the south. This blocked the Wisconsin River, damming it so that it backed up, forming Glacial Lake Wisconsin, a frigid lake that stretched from the Baraboo Hills north to the sites of Babcock and Wisconsin Rapids, submerging that part of the county. This area is generally flat and marshy now because meltwater rivers from the glacier and streams from land to the north carried sand and silt out into the glacial lake, where the sediment settled beneath its still waters. After the glacial dam melted enough to drain Glacial Lake Wisconsin around 13,000 years ago, the Wisconsin River cut new channels through the lake-bottom sands in the southeast corner of the county. In a later dry period, wind blew the sand into dunes. One dune in the town of Saratoga is eight meters thick. Later still, the area became wet and peat formed in places on top of the sand. [7] The first surveyors in 1852 found a great marsh, like a Wisconsin Everglades. Here is their description of what is now Cranmoor:

This Township is very nearly all covered either with Marsh or swamp there is not to exceed in the Township two Sections of land that would admit of cultivation... Timber on Swamp Tamarack & small Spruce(?) very thick. water from 6 to 20 inches deep, the marsh is covered with a light crop of grass, water from 12 to 40 inches deep, innumerable small Islands(?) interspered over this Town, the margins of which abound with Cranberries. [10]

Looking southeast across Wood County from the Marshfield moraine at Nasonville, with Powers Bluff in the middle and a plume from a paper mill at Rapids or Nekoosa on the right, almost at the far end of the county.

The north of the county was shaped by earlier glaciers, which deposited glacial till, the basis for the heavy soil there. The Marshfield moraine in the northwest corner is probably a terminal moraine from one of these earlier glaciers, or from a series of them. Its age is unclear, but its relatively smooth surface indicates that it has eroded for a much longer time than the choppy terminal moraines left 13,000 years ago, [7] like the Perkinstown moraine near Medford.

Much of the county except for the northeast corner is underlain by a layer of Cambrian sandstone, formed long before the last ice age. [11] Most of the original sandstone layer has been eroded away and the remainder is usually buried under glacial till, but it can be seen in gravel pits and a few bluffs. The Lindsey bluffs (a.k.a. the Marshfield School Forest) and Birch Bluff and South Bluff in the Town of Remington are hard spots in this sandstone which have resisted erosion. [7]

Powers Bluff is different from the sandstone bluffs, much older, with a hard core of Precambrian quartzite and a peak of chert. [7] A marker on the bluff says it is a "worn down peak of an ancient mountain range which once covered northern Wisconsin." [12] 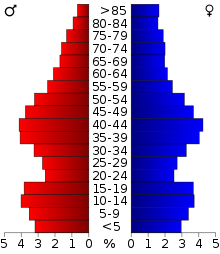 In 2017, there were 843 births, giving a general fertility rate of 69.1 births per 1000 women aged 15–44, the 19th highest rate out of all 72 Wisconsin counties. Of these, 16 of the births occurred at home. [19] Additionally, there were 59 reported induced abortions performed on women of Wood County residence in 2017, a figure higher than the records for the preceding four years. [20]

Wood County has a 19-member board of supervisors, each member representing a district. [21] 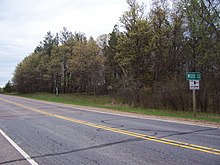