From Wikipedia, the free encyclopedia
For other places with the same name, see Marshfield, Wisconsin (disambiguation).
City in Wisconsin, United States

Marshfield is home to the Marshfield Clinic, a large healthcare system that serves much of Central, Northern, and Western Wisconsin. [7] [8] In 2010, Marshfield was ranked 5th in a list of "The Best Small Cities to Raise a Family" compiled by Forbes magazine. [9]

In 1851 and 1853, when the area was still forested, surveyors working for the U.S. government marked all the section corners in the 6 by 6 miles (9.7 by 9.7 km) square which now includes Marshfield, Hewitt, and Cameron, working on foot with compass and chain. [10] [11] When done, the deputy surveyor filed this general description:

This Township is nearly all Dry land, There being no Swamp of consequence in it. There being to much clay & rocks in it. Particularly that part which contains Fir & Hemlock. The surface is rough & uneven(?) and rather to flat for anything but meadow. There is some good Pine it but to much scattering to make it an object. The Township is well watered with small streams but none of them are of sufficient size for Milling purposes. The streams are lined with Alder & many of them producing good hay. There are no improvements in this Township. [12]

In 1872 the Wisconsin Central Railway was building the leg of its line from Stevens Point through the forest to what would become Colby, heading north for Lake Superior. The railway needed a supply depot between those two towns, and Marshfield was about midway. At the railroad's request, Louis Rivers, his wife and child, and his brother Frank came to the area and started cutting an opening in the forest. They built a two-room log hotel at what is now the corner of Depot and Chestnut streets, with bunks in the west room and tables, benches, bar and store in the east room. That crude building between the stumps was the first permanent structure in Marshfield. [16]

The first industry was a stave and spoke factory located near the railroad. [19] In 1878 William H. Upham, a " Yankee" migrant of English descent from Massachusetts and later governor of Wisconsin, [20] built a sawmill near the railway, with a millpond. By 1885 he had added a general store, a planing mill, a furniture factory and a flour and feed mill. Other businesses started, too: an alcohol factory, hotels, saloons, stores, newspapers, blacksmith, and a milliner. There were also churches and schools. The city was incorporated in 1883. [21] By 1885 the population exceeded 2,000, ranging from the Uphams in their fine Italianate homes to laborers living in shacks along the railroad. [16]

In 1887, a fire struck. On June 27, after a dry three weeks, fire broke out among the drying piles in the Upham mill's lumberyard, ignited by a spark from a train. The fire spread, consuming the sawmill and flour mill, and headed south into homes and the business district. Men tried to stop the inferno, even dynamiting stores to create a fire break, but the updraft lifted embers and dropped them onto more buildings. When it was over, 250 buildings were destroyed, but no lives were lost. The next day, Upham announced he would rebuild his businesses. Neighbors in Stevens Point, Spencer and Wisconsin Rapids sent trainloads of supplies. The city ruled that buildings on Central should henceforth be built from brick, [16] even though Marshfield had been largely built on wealth generated by lumber.

The late 1800s saw a burst of railroad building. In 1872 the Wisconsin Central built the first line through town. In 1887 Upham Manufacturing started a line south from town to haul logs from Cameron and Richfield. In 1890 a line to Neillsville was built. In 1891 a line was built from Centralia (now Wisconsin Rapids), another was built to Greenwood, and a third from Wausau to Marshfield came from the north. In 1901 a second line was built from Wisconsin Rapids to Marshfield. In 1903 38 passenger trains stopped daily in Marshfield. [22] So many tracks intersected in the community that Marshfield was nicknamed "Hub City".

The Hamilton and Catherine Roddis House was built in 1914.

The hub was also agricultural. Dairying began to organize as cheese factories started up, such as the one at Nasonville in 1885. Roddis and then Blum Brothers made wooden cheese boxes in Marshfield. By 1921 the Blum plant was making 3,500 boxes a day. [23] In 1907 the first cold storage plant was built in town, to store local cheese before shipping it by rail to larger markets. [24] Ice cream factories followed, [25] and processing of eggs, chickens, and liquid milk. In 1923 a spokesman for the Soo Line Railroad said that Marshfield shipped more dairy products than any other city in the United States. [23]

St. Joseph's hospital began with six beds in 1890. Operated by the Sisters of the Sorrowful Mother, it offered early health insurance. Lumbermen could pay a flat rate, and in exchange St. Joseph's would care for them in case of injury. In 1916, six local doctors formed a group practice clinic in the second story of the Thiel building downtown, calling themselves Marshfield Clinic. [26]

German immigrants made up two thirds of Marshfield's population in the 1890s. One of the two early newspapers, Die Demokrat, was published in German. [27] Many had family back in Germany as World War I approached, and had mixed sympathies. [28] In one of Marshfield's old Victorian houses, a once-hidden paper-hanger's signature boasts, "...1917, when the Germans licked the World." [29] Feelings were again mixed during World War II. [30] In the summer of 1945, 243 German POWs were brought in to fill a labor shortage at the canning factory north of the current Wildwood Park. [31]

Wood-working and building continued long after the pines were cut. During World War II, Roddis Lumber and Veneer, which produced plywood and other composites, was "the Allies' largest pre-fabricator of wood for Liberty ships".[ citation needed] Felker Brothers also produced components for the Liberty ships. The Frey brothers started building Rollohomes in 1947, and were followed by other manufacturers of mobile and modular homes. [32] With consolidation of dairy farms and the late-2000s recession, some of these industries have contracted, the medical complex has expanded.[ citation needed] Roehl Transport has also become a large enterprise. [33] [34] Around 2011 three new plants opened on the east side of town to process sand for hydraulic fracturing of oil and gas wells. [35]

The Köppen climate classification subtype for the climate of Marshfield is " Dfb". (Warm Summer Continental Climate). [38] 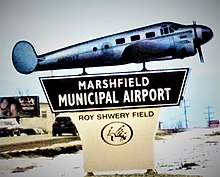 There were 8,777 households, of which 25.6% had children under the age of 18 living with them, 43.4% were married couples living together, 9.9% had a female householder with no husband present, 3.7% had a male householder with no wife present, and 43.1% were non-families. 36.8% of all households were made up of individuals, and 14.4% had someone living alone who was 65 years of age or older. The average household size was 2.14 and the average family size was 2.78.

The University of Wisconsin–Stevens Point at Marshfield and Mid-State Technical College – Marshfield Campus are located in Marshfield.

Marshfield has a local community arts facility, Chestnut Center for the Arts, and is the home of the New Visions Art Gallery, located in the Marshfield Clinic. The Vox Concert Series brings music performers from across the country to Marshfield.[ citation needed] In addition, the local UW campus hosts artists in its art gallery.

Marshfield Medical Center (Marshfield, Wisconsin), the only hospital in Marshfield, serves as a tertiary care center for much of northern Wisconsin. It is part of the Marshfield Clinic Health System.

The medical complex, with the Hospital on the left and Marshfield Clinic on the right