St. Croix County is part of the Minneapolis- St. Paul- Bloomington, MN-WI Metropolitan Statistical Area. Between 2000 and 2010, it was the fastest-growing county in Wisconsin. [4] 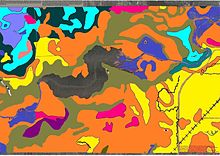 St. Croix County was created on August 3, 1840 [5] by the legislature of the Wisconsin Territory. It was named after the river on its western border. [6] Sources vary on the origin of the name; the St. Croix River may have been named after Monsieur St. Croix, an explorer who drowned at the mouth of the river late in the seventeenth century. Another account credits Father Hennepin with giving this region the French name Ste Croix (Holy Cross) because of the burial markers located at the mouth of the river. [7]

The part of St. Croix County allocated to Wisconsin became the parental county to Pierce and Polk Counties, and formed significant portions of Dunn, Barron, Washburn and Burnett Counties.

On June 12, 1899, a deadly F5 tornado struck New Richmond. The tornado's damage path was 400 yards (370 m) wide and 46 miles (74 km) long. The tornado formed on the banks of the St. Croix River, south of Hudson. Moving to the northeast across St. Croix County, the tornado passed through the villages of Burkhardt and Boardman before striking New Richmond head on leveling the entire business district and half the town's residences. The storm continued on towards the northeast, narrowly missing the town of Deer Park before crossing into Polk County, where it again narrowly missed the towns of Clear Lake, Richardson and Clayton. Once the tornado passed into Barron County, it struck the village of Arland (No reported fatalities or serious injuries) before breaking up southwest of Barron. The tornado killed 117 people (Four at Boardman, two in Polk County and the rest at New Richmond), including at least 20 people who died from their injuries in the days after the storm. Largely in thanks to state aid and donations, most of the town was rebuilt by the following winter. Today, the tornado stands as the deadliest ever recorded in Wisconsin and the 9th deadliest tornado in U.S. history.