West Bend is the county seat of Washington County, Wisconsin, United States, in southeastern Wisconsin. As of the 2010 census, the population was 31,078. [4]

Before the arrival of European settlers in southeastern Wisconsin, the Potawatomi and Menominee Indians inhabited the land now occupied by the city of West Bend. [5]

In 1845, the Wisconsin Territorial Legislature authorized the building of a road to connect Fond du Lac and Milwaukee. Byron Kilbourn, one of the highway commissioners, and Jasper Vliet, a surveyor, were put in charge of determining the route the road would take and of identifying a good halfway point for travelers. The path they chose is now U.S. Route 45 and the rest stop is present-day West Bend. Because many people used the resting place, it evolved into a popular area. The Milwaukee River running through the town eventually played a major role in the city's history. It was because of the western bend in the river that West Bend got its name. The river also produced enough energy to power saw mills and gristmills. Early buildings included Holy Angels Catholic Church, built in 1852 at the corner of Hickory and 7th. In 1866 this building was converted into a school, and a new church was built at Elm and 7th under the direction of Reverend Johann Baptist Reindl (1827–1891); [6] [7] the building is now Trinity Lutheran Church. [8] The railroad arrived in 1873, bringing with it more settlers and industrialization. At this time, West Bend saw a growth spurt, and in 1885 the city officially became an incorporated Wisconsin community. [9]

The Village of Barton

In 1845 early settler Barton Salisbury, while on a surveying trip up the Milwaukee River, found a rapids that he believed would be a good source of power for a sawmill. He built a log hut on the west side of the river and the village of Barton was born. On November 1, 1961, the city of West Bend annexed the Village of Barton. [10]

The West Bend tornado on April 4, 1981, struck the city, killing three people and injuring over 100 more. [11] There is a monument at a park near Green Tree Elementary School. [12]

In 2009, a controversy arose after a local couple complained to the West Bend Community Memorial Library about the presence of "sexually explicit books" and "books for youth on homosexuality" in the young adult section of the library. [13] [14] A petition [15] called on the library to label the identified books as explicit, move them to the adult section of the library, install Internet content filters on the library's computers, and "adopt a policy to attain balance in the viewpoints of selections (both affirming and opposing) that the libraries carry in issues sufficiently controversial within the West Bend community (i.e. homosexuality). Specifically, we request faith-based and/or ex-gay books affirming traditional heterosexual perspectives be added to the library."

The West Bend Common Council refused to reappoint four library trustees whose terms were ending. [16] One councilman complained that the library board was stonewalling the complaint, while another asserted that the library trustees were not serving the interests of the community “with their ideology.” [17] The council's actions were widely criticized, and local citizens unsuccessfully sought to have the vote rescinded. [18] [19] [20] After a public hearing on the petition in June 2009, [21] the library board voted to reject any restrictions on young adults' access to books in the library. [22] [23]

Four Wisconsin men belonging to the Christian Civil Liberties Union filed a claim against the West Bend library, asking for $30,000 apiece for "emotional distress," and that Francesca Lia Block's book Baby Be-Bop be "burned or destroyed." [24] [25] [26] [27] 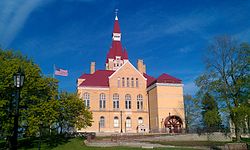 The Washington County Historical Society operates four distinct museums located in West Bend. [28] Buildings and sites that have been deemed historic by official bodies include:

Downtown West Bend has a movie theater which originally opened in 1929. The theater was last renovated in 1992 to house a total of three movie screens. [29] The theater was closed and listed for sale in January 2012, with a purchase occurring in May 2012. [30] The theater has not been re-opened for any purpose.

West Bend is in the Kettle Moraine region, and its topography is varied. The glacial activity has formed many kettles and hills throughout the region.

There were 12,769 households of which 32.4% had children under the age of 18 living with them, 50.1% were married couples living together, 10.0% had a female householder with no husband present, 4.4% had a male householder with no wife present, and 35.4% were non-families. 29.2% of all households were made up of individuals and 12.4% had someone living alone who was 65 years of age or older. The average household size was 2.39 and the average family size was 2.96.

Although many current residents of West Bend work in neighboring communities, the city's economy has been historically based in manufacturing and financial services. West Bend Mutual Insurance Company was founded in the city in 1894 [35] and West Bend Savings Bank (now Westbury Bank) in 1926. [36] The West Bend Aluminum Company (later the West Bend Company) was founded in 1911 by Bernhardt C. Ziegler, [37] and remained in West Bend until 2003. Ziegler had previously founded the securities brokerage company B.C. Ziegler & Co. in 1902. [38] In 1915 Robert H. Rolfs founded Amity Leather in downtown West Bend, which eventually became the world's largest manufacturer of leather billfolds. [39] Amity leather left the city in 1996. The strong economy in West Bend in the 1930s led Ripley's Believe it or Not to claim that West Bend was the only city in the United States that did not enter the Great Depression. In 1949, the printing company Serigraph, Inc. was founded in a garage in West Bend and went on to employ people all over the world. [40] The Gehl Company is also located in West Bend. [41]

The Army National Guard operates an armory near the airport, at 125 Chopper Drive, West Bend.

A paved riverwalk snakes through the city along the banks of the Milwaukee River. The Eisenbahn State Trail, [42] a Rails to Trails project, has added another trail for walking, running, biking, and roller skating. The 1,000-mile National Ice Age Trail crosses through West Bend. West Bend also has over 1,200 acres of parks and green space. [5]

Just north of downtown is Regner Park, which offers a wooded area for hiking, a baseball diamond, a community swimming pond with a beach, a fishing pond, and several softball and soccer fields. On the southeast side of the city is Quaas Creek Park, home to the Roman "Doc" Gonring Athletic Complex and Quaas Creek Trail. [43] This facility includes scenic bike/pedestrian trails, a canoe launch, three softball fields with two concession stands, and a children's play area. Lac Lawrann Conservancy, offers a 137-acre nature preserve and 5 miles of trails. [5]

A farmers' market is held in Downtown West Bend on Saturday mornings from May through October each year. The market is one of the largest in Southeastern Wisconsin. It includes entertainment from various sources and boasts over 65 vendors, selling produce, fruits, meats, eggs, maple syrup, bakery items, spices, soaps, herbal products, prepared foods and more. [44] [45] It was listed as a favorite farmers' market in Vogue magazine. [46]

Entertainment on Thursday nights in the summer is provided by Music on Main. The street in Downtown West Bend is closed to traffic and a different band takes the stage at Old Settler's Park each week. One local restaurant is designated each week to provide food and beverages for purchase. [44]

Maxwell Street Days and German Fest are two summer events held in the downtown. Riverfest (formerly Seafood Fest) is held every year at Regner Park on the first weekend in June. [47] A more recent annual event in Riverside Park is JazzFest.

West Bend has been branded the “ Geocaching Capital of the Midwest™,“ boasting over 1,200 caches within a 10-mile radius of the city. An annual "Cache Ba$h" has been sponsored by the West Bend Area Chamber of Commerce since 2008. [48]

A holiday light show, Enchantment in the Park, was moved to Regner Park in West Bend in 2012 (previously it was hosted at the Washington County Fair Park). [49] The event accepts donations to support local food pantries. [50] The event also includes an opportunity to visit Santa and ice skating on the pond at Regner Park.

West Bend is also home of the Museum of Wisconsin Art, an art museum dedicated to showing the works of Wisconsin artists. [51]

The city is governed by the City Council, consisting of the mayor and eight alderpersons. [54]

The city is served by the West Bend School District. The public schools in the district include six elementary schools, two middle schools, and two high schools.

The two high schools, West Bend East and West Bend West, are housed in a single building. The schools share facilities, but are operated as independent schools. Each school has its own sports teams and mascot.

West Bend has a country music station, WMBZ (92.5 FM) and a classic hits station, WIBD (1470 AM). The official newspaper of the City of West Bend is the West Bend Daily News. [57] The West Bend Booster is an independent, family-owned newspaper covering the area and has an office in West Bend. [58] The city of West Bend and the West Bend School District maintain their own separate public, educational, and government access channels, carried by both Spectrum and AT&T U-verse throughout the region and also online.

The options for public transportation within West Bend include the city and county taxi programs. The Washington County Commuter Express provides bus service to and from the city of Milwaukee. [5]