From Wikipedia, the free encyclopedia
This article is about the river in central and eastern Wisconsin. For the unrelated river that begins in far southeastern Wisconsin, see Fox River (Illinois River tributary). 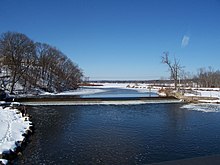 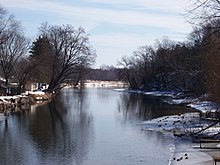 Looking east at the Upper Fox River in Montello 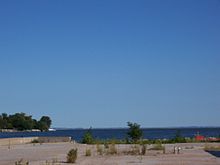 The Upper Fox River emptying into Lake Winnebago at Oshkosh 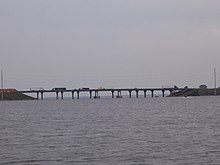 The Fox River is a river in eastern Wisconsin in the Great Lakes region of the United States. It is the principal tributary of the Bay of Green Bay, and via the Bay, the largest tributary of Lake Michigan. The well-known city of Green Bay, one of the first European settlements in North America, is on the river at its mouth on lower Green Bay.

The Fox River (Green Bay tributary) should not be confused with the Fox River (Illinois River tributary) which also flows through Wisconsin having its origin starting at a point approximately 10 miles northwest of Menomonee Falls, Wisconsin, and flowing through the cities of Waukesha, Mukwonago and Burlington, before flowing out of Wisconsin into Illinois. The Fox River (Illinois tributary) is the bigger of the two rivers flowing from southeast Wisconsin and terminating in Ottawa, Illinois where it joins the Illinois River, for an estimated journey of 202-mile-long (325 km). [2]

The river's name is the English translation of the French name for a local Native American tribe in the 17th century. The river was part of the famous 1673–74 expedition of Jolliet and Marquette, in which they went on to become the first Europeans to traverse the upper Mississippi River. A particular set of cities on the lower Fox River identify themselves as the " Fox Cities".

The Upper Fox River begins as a small stream northeast of Pardeeville. It flows west by southwest towards Portage and comes within 2 miles (3 km) of the Wisconsin River before turning north. After flowing past Montello, the river goes northeast until reaching Lake Butte des Morts. Here it is joined by the tributary Wolf River before entering the west side of Lake Winnebago at Oshkosh. The Upper Fox flows for a total of 142 miles (229 km). [1]

The Lower Fox begins at the north end of Lake Winnebago, where it flows north past Neenah, Menasha, and Appleton as it begins its 40-mile (64 km) [1] course northeast towards Lake Michigan. The river drops around 164 feet (50 m) over this short stretch. Prior to the construction of European-style dams after 1850, the river had many sizable rapids. The Lower Fox ends after flowing through the city of Green Bay and into Lake Michigan through Green Bay.

The name is the translation of Rivière aux Renards (French for River of the Foxes), given by explorers Louis Jolliet and Jacques Marquette because it went through the territory of the Meskwaki people, called Renards in French. In the Menominee language, the river is known as Meskwahkīw-Sīpiah, which means "Red Earth River". [3] In the Ho-Chunk language (Winnebago, Hoocąk, Hocąk), Fox River is known as Nionigera. [4] According to a member of the party of La Salle, it was also called the Kakaling River. [5]

Along the banks is a chain of cities and villages, including Oshkosh, Neenah, Menasha, Appleton, Little Chute, Kimberly, Combined Locks, and Kaukauna. Except for Oshkosh, located on the Upper Fox River near Lake Winnebago, these cities and villages identify as the Fox Cities. Farther north along the Lower Fox River, from its outlet from Lake Winnebago and before its mouth at Lake Michigan, are the cities of De Pere and Green Bay (located at the lake), and the villages of Ashwaubenon and Allouez; although they are in the Fox River Valley, this grouping of cities and villages does not refer to themselves as Fox Cities.

Since the recession of the glaciers that once covered much of Wisconsin, the Fox River has supported several Native American cultures, and has been important for its fisheries, waterfowl, wild rice, forests, and water. Archaeologists have claimed that indigenous peoples lived in the Fox River area as early as 7000 BC. [6]

Prior to European settlement in the late 17th century, the shores of the Fox River and Green Bay were home to roughly half the estimated 25,000 Native Americans who lived in what is today Wisconsin. The first Europeans to reach the Fox were French, beginning with explorer Jean Nicolet in 1634. In 1673 explorers Jacques Marquette and Louis Joliet canoed up the river as far as Portage. Here they made the short portage from the Fox to the Wisconsin River and then canoed on toward the Mississippi River. They established an important water route between the Great Lakes and the Mississippi River known as the Fox–Wisconsin Waterway. It was likely long used by Native Americans prior to European encounter, as they had extensive cross-country trading routes related to the Mississippi River.

During the French colonization of the Americas, this route was used frequently by fur traders. French-Canadian men who established homes on the Fox River married First Nation women, producing mixed-race descendants who were generally raised within the matrilineal cultures of their mothers and identified with the tribes. In Canada, the Metis of the Red River of the North are classified as a distinct ethnicity because of their shared culture. [6]

The Fox-Wisconsin Waterway's importance continued into the 1850s, when the Fox and Wisconsin Improvement Company built locks and dams on the Fox and a canal to connect it to the Wisconsin River at Portage. [7] The company was hoping to establish Green Bay as a port city to rival Chicago by making the Fox-Wisconsin Waterway into the principal shipping route between Lake Michigan and the Mississippi River. This goal was never achieved, as the Upper Fox remained too shallow for significant shipping even after damming and dredging. In addition, the lakes that the narrow, winding stream flows through were frozen solid for five months every year. [6]

The Lower Fox was developed instead as a center of riverfront industry. [7] During the mid-19th century, when Wisconsin was a leading producer of wheat, several flour mills were built along the river to harness its abundant water power. During the 1860s, as Wisconsin's wheat production declined, these flour mills were replaced by a growing number of paper mills, which processed the great amount of timber being harvested from the forests. The Lower Fox proved an ideal location for paper production, owing to its proximity to lumbering areas that could supply wood pulp to make paper. Several well-known paper companies were founded in cities along the river, including Kimberly-Clark, Northern Paper Mills (makers of Quilted Northern), and the Hoberg Paper Company (manufacturer of Charmin).

The Lower Fox remains a major area for paper production. There are 24 paper and pulp mills along the Lower Fox River that produce more than five million tons of paper per year and employ around 50,000 people. The principal cities located in this valley are Green Bay, Appleton, Neenah, Menasha, De Pere, and Kaukauna. Although Oshkosh is a major city in the chain, active production of paper products is no longer located there.

In the section between Lake Winnebago and Green Bay at Lake Michigan, the Fox River flows roughly south to north and descends through a height equal to that of Niagara Falls. As such, the Fox River was an ideal location for constructing powerful sawmills that made the Fox River area famous for its paper industry. A negative side effect of this industrialization was the dumping of hazardous material byproducts of the paper mills. It was soon after this started that dumping became illegal.[ when?] While evidence of these waste deposits remains to date, the Fox River is being cleaned up. [8] Dredging of the chemicals in the river began on April 28, 2009 [9] [10] and capping started soon after during the summer of 2009, and continues in 2013. [11]

The high concentration of paper mills and other industry along the Lower Fox has historically been the source of much pollution of the river. Public debate about this contamination began as early as 1923, but little was done to improve the river until the federal Clean Water Act was passed in 1972. Much effort has since been put into cleaning the Fox, but problems still exist. According to some measures of pollution (e.g. dissolved oxygen, pollution-tolerant worm counts), the Lower Fox River is much cleaner than it was before 1972. However, according to other measures of pollution (e.g., phosphorus, estrogenic compounds, discarded pharmaceuticals), the river waters are slightly more contaminated than before 1972. As a result, debate over the river's contamination continues between environmentalists, the paper industry, Indian tribes, and elected officials at the federal, state, and local levels.

While not officially designated as a U.S. Superfund site, the Lower Fox River bottom has some sections contaminated with toxic chemicals. These contaminated sediments are the river's current environmental problem. One contaminant of special concern today is a group of chemicals called Polychlorinated biphenyls or PCBs. PCBs entered the river from many sources, but the largest deposits of contaminated sediments are traceable to the local paper recycling mills. These have been part of the region's history, culture and economy, and cleanup is a complex and difficult issue.

The U.S. government and State of Wisconsin filed suit on October 14, 2010, against nine paper companies and two municipalities for their failure to pay for PCB cleanup actions to date. The government has not obtained long-term agreements from these organizations for sediment cleanup efforts. The companies named in the suit are NCR Corporation, Appleton Papers, CBC Coating, Kimberly-Clark, Menasha Corporation, NewPage Corporation, Glatfelter, U.S. Paper Mills ( Sonoco) and WTM (Wisconsin Tissue Mills). The local agencies being sued are the City of Appleton and Neenah-Menasha Sewerage Commission. [12] [13] In 2012, a judge upheld the EPA's plan. [14]

Since the late 19th century, dredging of river bottom sediments has been done to allow large ships to enter the Fox River. The contaminated sediment has been used since the 1960s to fill local wetlands, causing adverse effects on wildlife and plants. After 1978 it was used to develop an off-shore engineered holding area called Renard Isle, also known as Kidney Island.

Among the wildlife in the Fox River Valley are birds such as mallard ducks and Canada geese, and fish such as walleye.

Early on,[ when?] parts of the Fox River were used for recreational purposes. This only lasted for a short period of time as the water quality deteriorated, and the water was considered unhealthy. [6] Also, fishing was a huge aspect of life on the water as many fisheries were set up along the river. This remained large for a short period of time[ when?] but also was soon limited by water pollution and the depleted amount of fish. Restrictions were placed on how many and what kind of fish could be caught.

The Fox River region has been dominated by dairy farms that benefited from the rich soil and plentiful water supply.

The 25-mile (40 km) Fox River State Recreational Trail is part of the Brown County Park System. The trailhead is in the city of Green Bay where 7 miles (11 km) of paved trail follow the Fox River south through the city of De Pere. Biking, walking, jogging, and rollerblading are among the most popular activities on the trail. The trail also has a section of unpaved terrain that permits horseback riding. [15]