From Wikipedia, the free encyclopedia
This article is about the city in St. Croix County. For the town in Walworth County formerly called Hudson Township, see Lyons, Wisconsin.
City in Wisconsin, United States

Hudson is a city in St. Croix County, Wisconsin, United States. As of the 2010 United States census, its population was 12,719. It is part of the Minneapolis–St. Paul Metropolitan Statistical Area (MSA). The village of North Hudson is directly to the north of Hudson. 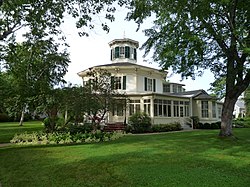 The Octagon House Museum, listed on the National Register of Historic Places, was built in 1855.

Hudson was settled in the summer of 1840 by Louis Massey and his brother in-law, Peter Bouchea. William Streets arrived at about the same time. Later that same year, Joseph Sauperson (commonly known as Joe LaGrue) took up residence. These four are considered Hudson's original inhabitants. Massey and Bouchea settled at the mouth of the Willow River, near the present-day First and St. Croix Streets. They had been part of the group who lived for some time along the river below Fort Snelling, which appears on some old maps as "Massey's Landing". The 1840s saw a few settlers making their appearance here — Captain John Page, the Nobles brothers, Dr. Philip Aldrich, Ammah Andrews, Moses Perrin, Colonel James Hughes, Daniel Anderson, and others.

Hudson was originally called Willow River. It was later named Buena Vista by Judge Joel Foster, founder of River Falls, after returning from the Mexican War where he fought in the Battle of Buena Vista. In 1852, Alfred D. Gray, Hudson's first mayor, petitioned to change the name of the city to "Hudson", because the bluffs along the St. Croix River reminded him of the Hudson River in his native New York.

A large number of settlers arrived in the 1850s and 1860s, many of whom were ancestors of today's residents. The lumber industry was the prime attraction of the area, and over time sawmills were established throughout the St. Croix Valley.

The Chicago, St. Paul, Minneapolis and Omaha Railway was formed in 1881 from other railroads building between the Twin Cities and Chicago. [4] The shops and headquarters of the Omaha Road were located in Hudson. This route is now part of the Union Pacific Railroad.

On August 30, 1917 a violent mob of 1,000 held a night rally in front of the armory protesting the attempt by the pacifist People's Council of America to hold a conference in Hudson's prizefighting arena. The crowd then moved on the four organizers in the lobby of their hotel and threatened to hang them. Only after the pleadings of county attorney N. O. Varnum were the four allowed to leave town at once and unharmed. [5]

U.S. Highway 12 once crossed the St. Croix River on a toll bridge between Wisconsin and Minnesota, which provided revenue for the town. With the construction of Interstate 94, the toll bridge was removed, though the long causeway extending to the former bridge location is now open to the public as a pedestrian walkway, known as “The Dike.” 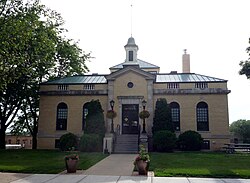 Interstate Highway 94, U.S. Route 12 and Wisconsin Highway 35 are three of the main routes in the community.

There were 5,287 households, of which 32.6% had children under the age of 18 living with them, 49.0% were married couples living together, 9.9% had a female householder with no husband present, 4.0% had a male householder with no wife present, and 37.1% were non-families. 29.6% of all households were made up of individuals, and 10.4% had someone living alone who was 65 years of age or older. The average household size was 2.36 and the average family size was 2.95.

There were 3,687 households, out of which 31.3% had children under the age of 18 living with them, 50.4% were married couples living together, 8.1% had a female householder with no husband present, and 38.4% were non-families. 29.1% of all households were made up of individuals, and 9.8% had someone living alone who was 65 years of age or older. The average household size was 2.35 and the average family size was 2.94.

Hudson has grown as a tourist destination and restaurants on the St. Croix in its historic downtown, along with hotels and other businesses that serve traffic on Interstate Highway 94.[ citation needed]

The former greyhound racing track, St. Croix Meadows, is being redeveloped to include a hotel, dining, commercial office space, residential condos, a baseball field, an 18-hole mini golf course, and an indoor sports complex with two hockey rinks and a soccer arena. [11]

There are no public use airports in Hudson, though residents have access to the New Richmond Regional Airport, and the St. Paul Downtown Airport for general aviation, and the Minneapolis-Saint Paul International Airport (MSP) for commercial, and international flights. There is an airport shuttle from Hudson to MSP.

In 2010 the University of Wisconsin-River Falls opened a satellite campus in Hudson with a focus on undergraduate and graduate degrees for adult students.