From Wikipedia, the free encyclopedia
County in Wisconsin, United States

Waukesha County ( wok-USH-aww) is a county in the U.S. state of Wisconsin. As of the 2010 census, the population was 389,891, [1] making it the third-most populous county in Wisconsin. Its county seat is Waukesha. [2]

The part of Wisconsin that Waukesha County occupies was a part of Michigan Territory when Milwaukee County was organized in September 1834. [3] On July 4, 1836, the Wisconsin Territory was formed, which included land that is now in the state of Minnesota. [3] In January 1846, part of Milwaukee County was split off into Waukesha County. [4] [5] Curtis Reed was the first county chairman. [4] When a vote decided the county seat, Waukesha defeated Pewaukee by two votes. [4] The name is derived from the Potawatomi word for 'fox' because the streams in the lower part of the county drain into the Fox River. [6]

Waukesha was a New England settlement, and Waukesha's founders were settlers from New England, particularly Connecticut, rural Massachusetts, Vermont, New Hampshire and Maine, as well as from upstate New York who were born to parents who had migrated there from New England shortly after the American Revolution. These people were " Yankees" descended from the English Puritans who settled New England in the 1600s. They were part of a wave of New England farmers who headed west into what was the wilds of the Northwest Territory during the early 1800s. Most arrived as a result of the completion of the Erie Canal as well as the end of the Black Hawk War.

When they arrived in what is now Waukesha County, there was nothing but dense virgin forest and wild prairie. The New Englanders built farms, roads, government buildings and established post routes. They brought many of their Yankee New England values, such as a passion for education that led to the establishment of many schools as well as staunch support for abolitionism. They were mostly members of the Congregationalist Church, though some were Episcopalian. Due to the second Great Awakening some converted to Methodism, and others became Baptists before moving to what is now Waukesha County. Waukesha, like much of Wisconsin, would be culturally very continuous with early New England culture for most of its early history. [7]

In 2011, the initial unofficial statewide tally in a Wisconsin Supreme Court election had Democratic challenger JoAnne Kloppenburg defeating incumbent justice David Prosser by a 204-vote margin. On the Thursday after the election, Waukesha County Clerk Kathy Nickolaus reported, among other smaller errors, a failure to report votes in the Waukesha city of Brookfield. The newly reported votes gave Prosser the lead, and he retained his seat. [8] Media reports stemming from this incident referred to the county as "crucial Waukesha County," and as of 2017 [update], the phrase has continued to be widely used in U.S. political media as an in-joke. [9] [10] [11]

Because of its large number of lakes, the northwestern corner of Waukesha County is referred to as "Lake Country" by local residents. It includes Pewaukee, Delafield, Hartland, Merton, Nashotah, Chenequa, Okauchee Lake, Oconomowoc, Summit, and Lac La Belle. 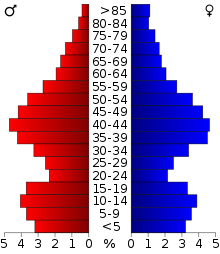 There are 12 departments in Waukesha County, with most located in the Administration Center.

The Waukesha County Airport serves commercial and private aircraft and is supervised by the Airport Commission.

The Medical Examiner investigates suspicious or unexplained deaths or deaths that result from a homicide, suicide, or accident. The office also generates statistics for the county.

The Department of Parks and Land Use (PLU), oversees six divisions that design and maintain county parks. The division also works with state and federal agencies. The planning division administers permits for construction and landscaping activities. The land conservation division works to educate on and regulate soil and water issues. Most programs look to control water runoff and soil erosion. The recycling and solid waste division oversees recycling and disposal programs. It also performs educational outreach on topics such as composting and waste reduction. The official mascot of the recycling division is Recycle Raccoon. The environmental health division oversees animal welfare issues, food safety, and air, water and sewage, and safety issues (such as radon testing, well testing, and septic system monitoring). The land information systems division coordinates databases of information relating to land use and development.

The University of Wisconsin-Extension is a partnership with Waukesha County and brings the research of the UW System to families, businesses, governments, and organizations through educational outreach programs. The UW-Extension office also houses 180° Juvenile Diversion, a non-profit organization that rehabilitates first-time young offenders in Waukesha County.

Waukesha County is the largest Republican-leaning county in Wisconsin and has been one of the GOP's most solid suburban strongholds for many years. It has not supported a Democrat for president since 1964, and has only supported a Democrat four other times since 1892. While other non- Southern suburban counties (with an exception being the Atlanta metropolitan area) have moved towards Democrats since the 1990s, Waukesha and other Milwaukee suburbs have continued to vote solidly Republican. [21] The county is split between 10 state assembly districts, all but one of which is held by a Republican, and six state senate districts, all held by Republicans.

Note – for zoning purposes, a single acre of Waukesha County was annexed by the city of Milwaukee in 2003 to accommodate the Ambrosia Chocolate Factory. [24]