From Wikipedia, the free encyclopedia
This article is about the city. For the adjacent town, see River Falls (town), Wisconsin.
City in Wisconsin, United States 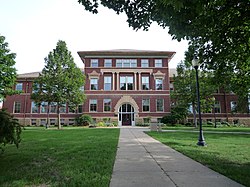 South Hall, on the University of Wisconsin-River Falls campus, is on the National Register of Historic Places.

River Falls is the home of the University of Wisconsin–River Falls.

The city's first settlers were Joel Foster and his indentured servant, Dick, in 1848. [6] The village was started as Kinnickinnic in 1854 by brothers Nathaniel N. and Oliver S. Powell, who were from St. Lawrence County, New York. At the time, the town and village were also known as Greenwood, but this was changed, as another Greenwood, Wisconsin already existed. [7] The present name comes from the Kinnickinnic River rapids. [8]

On June 23, 1893, a lightning bolt hit the center circus pole at a Ringling Brothers circus performance in River Falls, injuring more than a dozen audience members and performers and killing seven. [9]

River Falls is home to the University of Wisconsin-River Falls and a branch of the Chippewa Valley Technical College.

The Kinnickinnic River, which flows through the heart of the city and its downtown business district, is a popular recreational attraction in River Falls for fly fishers and kayakers.

On the bluffs of the Kinnickinnic River is Glen Park, a 41-acre park established in 1898. The park has playgrounds, a swimming pool, soccer fields, a softball diamond, basketball courts, horseshoe pits, a gazebo, and several miles of walking trails. [15] The Glen Park Pool was built in 1937 and renovated for its 75th anniversary in 2012. [16] Glen Park's Swinging Bridge offers a view of the South Fork rapids as it enters the Kinnickinnic River. The bridge, a replica of one designed by the Minneapolis Bridge Company and constructed in 1925, is a suspension bridge that spans the South Fork Rapids at the site of the former Cascade Mill and Dam. Below the bridge are fishing, swimming, and picnic spots. [17]

Hoffman Park, located northeast of downtown River Falls, is a 53-acre (21 ha) facility that contains baseball fields, a nine-hole disc golf course, a campsite, a skate park, volleyball courts, and the Tri-Angels Playground. [18] The playground was named after Amara, Sophie, and Cecilia Schaffhausen, who were murdered by their father, Aaron Schaffhausen. The playground, accessible to handicapped children and built with designs referring to the three girls, opened in 2015. [19] It was constructed at a cost of $550,000 by volunteers. [20]

Another attraction is The Falls Theater, a movie theater.