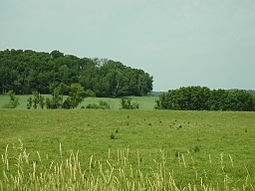 Eau Claire county was originally set off as the Town of Clearwater in Chippewa County in 1855. The name was changed to the Town of Eau Claire on March 31, 1856. The entire town was separated as Eau Claire County by an act of the Wisconsin State Legislature on October 6, 1856. [5] [6] 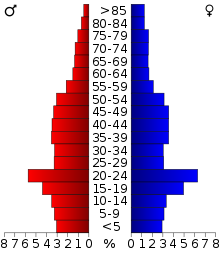 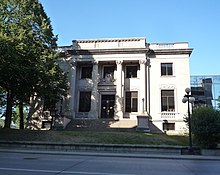 The board meets in the Eau Claire County Courthouse in downtown Eau Claire, [17] with its weekly meetings televised on local public television and transcripts published online. Most items are approved on a "consent calendar" without discussion. [18] Public comment is limited to three minutes per individual per item.

Eau Claire County contains portions of the Wisconsin State Senate districts 23 and 31, represented by Kathy Bernier (R) and Jeff Smith (D) respectively. It also contains portions of Wisconsin State Assembly districts 68 ( Jesse James [R]) and 93 ( Warren Petryk [R]), as well as almost all of district 91 ( Jodi Emerson [D]). At the federal level, the entire county is contained within Wisconsin's third congressional district, which is represented in the United States House of Representatives by Ron Kind (D). 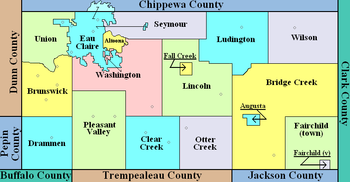 Political map of Eau Claire County, showing major and minor civil divisions, and adjacent counties. Note: A small portion of the city of Eau Claire is in Chippewa Co.