Fitchburg is a city in Dane County, Wisconsin, United States. The population was 25,260 at the 2010 census. Fitchburg is a suburb of Madison and is part of the Madison Metropolitan Statistical Area. Fitchburg consists of a mix of suburban neighborhoods closer to the border with the city of Madison, commercial and industrial properties, and more rural properties in the southern portion of the city. Despite its status as an incorporated city, some rural parts of Fitchburg still lack certain municipal services such as sewer, water, and natural gas.

There were 9,955 households of which 33.6% had children under the age of 18 living with them, 47.4% were married couples living together, 10.5% had a female householder with no husband present, 4.7% had a male householder with no wife present, and 37.3% were non-families. 27.3% of all households were made up of individuals and 5.4% had someone living alone who was 65 years of age or older. The average household size was 2.45 and the average family size was 3.03. 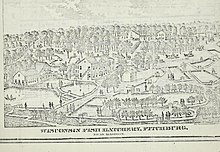 Fitchburg is served by the Fitchburg Police Department and Fitchburg Fire Department. Emergency medical services are provided by the Fitch-Rona EMS district, which also serves the neighboring city and town of Verona. Various portions of Fitchburg are served by municipal sewer, water and natural gas utilities.