Menominee County is a county in the U.S. state of Wisconsin. As of the 2010 census, the population was 4,232 [1] making it the least populous county in Wisconsin. Its county seat is Keshena. [2]

Menominee is Wisconsin's newest county, having been created in 1959 after the Menominee tribe was terminated by federal law. In 1974, the tribe regained federal recognition and restoration of most of its reservation. Today Menominee County is essentially coterminous with the boundaries of the federally recognized Menominee Indian Reservation.

The county was created from the northeastern portion of Shawano County on July 3, 1959, in anticipation of the termination of the Menominee Indian Reservation in 1961. The reservation status was restored in 1973, and is now co-extensive with the county.

Most of the land within the county boundary is under Federal trust for the exclusive use by enrolled members of the Menominee nation. Scattered parcels that were purchased during termination, as well as many lots around the Legend Lake area in the southeastern part of the county, are the only parts of the county that are privately owned by non-Native Americans. Most of Menominee County's population consists of members of the Menominee nation. [3] 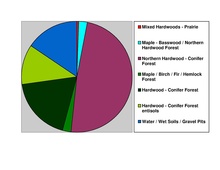 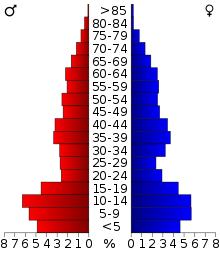 In presidential elections, Menominee County has always voted for the Democratic candidate and always by a higher percentage than all other Wisconsin counties. In 2016, Donald Trump became the first Republican to win over 20% of the vote in the county since George H. W. Bush in 1992.

Woods occupy most of Menominee County

Menominee County is one of only two counties in Wisconsin with no incorporated communities, the other being Florence County.