From Wikipedia, the free encyclopedia
This article is about the city. For the adjacent town, see Manitowoc (town), Wisconsin.
City in Wisconsin, United States

Manitowoc ( /ˈmænɪtəwɔːk/) is a city in and the county seat of Manitowoc County, Wisconsin, United States. [7] The city is located on Lake Michigan at the mouth of the Manitowoc River. According to the 2010 census, Manitowoc had a population of 33,736, with over 50,000 residents in the surrounding communities.

Purported to mean dwelling of the great spirit, Manitowoc derived its name from either the Anishinaabe language word manidoowaak(wag), meaning spirit-spawn(s), or manidoowaak(oog), meaning spirit-wood(s), or manidoowak(iin), meaning spirit-land(s). [8][ failed verification] In the Menominee language, it is called Manetōwak, which means "place of the spirits". [9] The Menominee ceded this land to the United States in the 1836 Treaty of the Cedars, following years of negotiations over how to accommodate the Oneida, Stockbridge-Munsee, and Brothertown peoples who had been removed from New York to Wisconsin. [10] [11] In 1838, an act of the Territorial Legislature separated Manitowoc County from Brown County, keeping the native name for the region. [12] [13]

The first Europeans in the area were French fur traders who arrived in 1673. The Northwest Fur Company established a trading post in 1795. [14] In 1835, before the transfer of land from the Menominee Nation to the United States, President Andrew Jackson authorized land sales for the region, drawing the interest of land speculators. William Jones and Louis Fizette were the two first recorded buyers on August 3, 1835, with the majority of the land being procured by the Chicago firm Jones, King, & Co. Benjamin Jones, brother of William, took the Wisconsin property as his share and is considered the founder of Manitowoc. Early immigrant groups included Germans, Norwegians, British, Irish, and Canadians. [15] The first school in Manitowoc was held in the Jones warehouse, with S. M. Peake instructing the twelve children of the community. [16] The first religious organization in the county, St. James' Episcopal Church, first met in 1841. [17] Manitowoc was chartered as a village on March 6, 1851 [13] and on March 12, 1870 was incorporated as a city. [13]

In 1847, Joseph Edwards built the first schooner in the area, the Citizen, a modest precursor to the shipbuilding industry that produced schooners and clippers used for fishing and trading in the Great Lakes and beyond the St. Lawrence River. [18] In addition, landing craft, tankers and submarines became the local contributions to U.S. efforts in World War II.

A metal ring marks the location of the Sputnik 4 impact

On September 5, 1962, a 20-pound (9.1 kg) piece of the seven-ton Sputnik 4 crashed on North 8th Street. Sputnik 4 was a USSR satellite, part of the Sputnik program and a test-flight of the Vostok spacecraft that would be used for the first human spaceflight. It was launched on May 15, 1960. A bug in the guidance system had pointed the capsule in the wrong direction, so instead of dropping into the atmosphere the satellite moved into a higher orbit. It re-entered the atmosphere on or about September 5, 1962. [19] [20] A cast was made from the original piece before the Soviets claimed it, and the cast was displayed at the Rahr West Art Museum. [21] A customer in a nearby art gallery jokingly suggested that the city should hold a festival to celebrate the crash. [20] The city held the first Sputnikfest in 2008, which was organized by the head of both museums. [20]

Manitowoc was historically a sundown town that prohibited African Americans from staying overnight. In 1968, the policy forced a visiting Gwendolyn Brooks to stay at Holy Family College, just outside of Manitowoc, after a poetry reading. [22]

Manitowoc is home to the Wisconsin Maritime Museum, and is one endpoint of the ferry route of the SS Badger, which connects U.S. Route 10 to Ludington, Michigan.

Since the late 1990s, several new shopping centers have opened in the city, mostly on the southwest side of the city along Interstate 43, including the new Harbor Town Center shopping complex. The downtown area has also seen a resurgence, with several new restaurants opening, and the recent announcement of new $100,000+ condominiums on the Manitowoc River, along with a completion of the riverwalk trail. The bulk of the redevelopment in the city has been undertaken by the public/private partnership the Manitowoc County Economic Development Corporation.

The lighthouse on Manitowoc's North pier

The nearest other cities are Green Bay, 40 miles (64 km) away, Sheboygan 28 miles (45 km) away, Appleton 47 miles (76 km) away, and Milwaukee 80 miles (130 km) away. Together with Two Rivers and the surrounding towns, the Manitowoc micropolitan area was, according to the 2000 census, home to 52,197 people. The city forms the core of the United States Census Bureau's Manitowoc Micropolitan Statistical Area, which includes all of Manitowoc County (2000 population: 82,887).

Manitowoc has a humid continental climate. Lake Michigan has a moderating effect on its climate compared to regions more inland, making it warmer in the winter and cooler in the summer than most nearby cities. Manitowoc has a yearly average high of 52 °F (11 °C) and a yearly average low of 38.5 °F (4 °C). Manitowoc also has an extreme high and extreme low of 101 °F (38 °C) and −27 °F (−33 °C), respectively. The city receives an average of 31.17 in (792 mm) of precipitation every year, in the form of rain and snow, with rain being more prevalent in months April–November, and snow being more prevalent in months December–March. Precipitation is spread fairly evenly throughout the year, with the wettest month being August, with 3.58 in (91 mm) of precipitation, and the driest month being February, with 1.38 in (35 mm) of precipitation.

There were 14,623 households of which 27.0% had children under the age of 18 living with them, 44.5% were married couples living together, 10.0% had a female householder with no husband present, 4.3% had a male householder with no wife present, and 41.2% were non-families. 35.4% of all households were made up of individuals and 14.7% had someone living alone who was 65 years of age or older. The average household size was 2.24 and the average family size was 2.91.

There were 14,235 households out of which 28.6% had children under the age of 18 living with them, 49.0% were married couples living together, 9.1% had a female householder with no husband present, and 38.1% were non-families. 32.5% of all households were made up of individuals and 14.6% had someone living alone who was 65 years of age or older. The average household size was 2.32 and the average family size was 2.96.

The city government consists of a mayor and a city council with 10 members elected from single member districts. The current mayor is Justin Nickels. [29]

It was a diversified manufacturer with interests in the construction and Manitowoc Ice Welbilt food service industries. 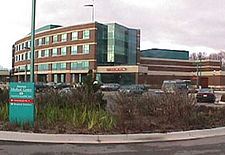 The Manitowoc area is served by two main medical groups:

Manitowoc public schools are administered by the Manitowoc Public School District. High schools within the city include:

The city has three colleges and universities within its limits, including:

Manitowoc is part of the Green Bay television market, although it is not uncommon for residents to receive stations over-the-air from Milwaukee, and across the lake from the Grand Rapids and Traverse City/ Cadillac markets. No television stations originate from Manitowoc, and the only full-time presence of Green Bay stations in the city are remote-operated weather cameras and WFRV-TV featuring some Herald Times Reporter content in newscasts as part of a promotional agreement with Gannett's northeastern Wisconsin newspapers.

Comcast holds the city's cable franchise, inherited from the company's earlier purchase of Jones Intercable, and the city has the only presence of Comcast in all of Eastern Wisconsin.

Manitowoc is classed as part of Nielsen Audio's Sheboygan/Manitowoc radio market and combined with Two Rivers, and stations from both Sheboygan and Green Bay are easily heard in the area. Since 2017, Seehafer Broadcasting has owned all six local radio stations broadcasting in Manitowoc County.

The Franciscan Sisters of Christian Charity have their mother house in Manitowoc.

In 2005 the Roman Catholic Diocese of Green Bay merged several Catholic parishes in the city into one parish, St. Francis of Assisi Catholic Church, with a 4-man pastoral team led by Father Dan Felton. In 2005, the Herald Times Reporter reported that the city has roughly 22,000 Roman Catholics.

The Wisconsin Evangelical Lutheran Synod is a significant Christian synod in the city with four large churches and Manitowoc Lutheran High School. Two additional Wisconsin Synod churches are outside the city limits with a Manitowoc address.

St. James' is an historic Episcopal church in the city.

The Church of Jesus Christ of Latter-day Saints has a meetinghouse in Manitowoc. [32]

Public transportation in the city been provided by Maritime Metro Transit since 1978, covering both Manitowoc and Two Rivers, Wisconsin. MMT currently has a fleet of 12 buses serving over 40 stops on 8 routes.

Manitowoc is the western port for the S.S. Badger ferry, that crosses Lake Michigan to Ludington, Michigan. The ferry ride is part of the route of U.S. Route 10.

The Manitowoc Mariners Trail is a 5.5-mile (8.9 km) paved recreational trail running along the shore of Lake Michigan between the cities of Manitowoc and Two Rivers, Wisconsin.