From Wikipedia, the free encyclopedia
This article is about the city. For the adjacent town, see Brookfield (town), Wisconsin.
City in Waukesha

Brookfield is west of Milwaukee in Waukesha County in an area originally inhabited by Potawatomi Indians. [7] The first white settler, William Howe, arrived in 1820 with a Presidential Land Grant giving him title to the area. Soon after, Robert Curren bought a claim in 1836, and established a tavern and inn. [8]

In May 1838, Jacques View Jr., with a large party of white settlers, lead the local Potawatomi west. By 1839, the population needed a school house, as the 1840 census showed a population of 148. In these 1840's, George Gebhardt started trading with the surrounding Potawatomi and Menominee neighbors. 1843 is when the first church was built, by the Irish Catholic congregation, named St. Dominic. 1848 was when telegraph lines were laid through Brookfield, towards Waukesha. Communication was made easier due to this. In 1849, cholera reached Brookfield, and one Laura Grover recalls, "The death-like stillness was appalling; nothing was seen but the death carts rolling round the streets gathering the recent dead... I believe there were fifty deaths from cholera that day." The same year, 64 Brookfield residents voted in favor of giving suffrage to black residents, and 0 the other way. In 1850, cholera again went through Brookfield, and according to one Earl Thayer, "The cholera returned... more terrible than the year before. People literally died walking along the streets. Official reports put the toll at over 300." [9]

In 1850, the Milwaukee and Mississippi Railroad (now the Canadian Pacific Rail) built a railroad through the town, which in 1853 erected a depot, forming the Brookfield Junction. In the year 1850, the Town of Brookfield had 1,944 inhabitants and in land area covered 36 square miles. The town slowly grew over following years, with the economy being mostly agricultural, with Brookfield Junction serving as a commercial center for the surrounding farms. [8] The Civil War, an important part of American history, had little affect to this town. [9] In 1867, a second rail depot was constructed, which still stands. [8]

In the 1900's, Brookfield gained a new reputation. Waukesha County was called Cow County, U.S.A., as according to advertisers, they claimed that in the county there were more cows than people. This was, of course, fantastical, although there were cows. This did help cement Wisconsin's dairy reputation. WWI, one of the biggest wars in history, also didn't have too much of an effect on Brookfield and how we know it today. The Spanish flu, however, did kill many people, but not as many as cholera had in the past. [9] On May 31, 1914, a tornado hit, devastating the farmers and the rural area. [10]

This quiet, rural atmosphere attracted one notorious resident, Al Capone, as he established an area to live and a distillery on Brookfield Road. [11] In 1928, the first suburban development, Kinsey's Garvendale, a residential subdivision, was created. Early subdivisions grew slowly due to the Great Depression hitting a year later, affecting its growth and killing demand.

Development in Brookfield began to increase after the Second World War. Suburban development was encouraged by a lack of housing, the baby boom, and government sponsored building programs, which further grew the town, and after several annexations of neighboring communities, an incorporation drive started. The City of Brookfield was incorporated from the town of Brookfield, a portion of which still survives along the city's western edge, on August 14, 1954. The first mayor was Franklin Wirth, and he oversaw the new city, which at the time had a population of 7,900 and covered an area of 17.5 square miles. Much of the land was still in agricultural use, so the city's founders encouraged orderly development of office and industrial areas to cause the community to function with strong industrial and commercial base.

According to the United States Census Bureau, the city has a total area of 27.59 square miles (71.46 km2), of which 27.29 square miles (70.68 km2) is land and 0.367 square miles (0.95 km2) is water. [12] The sub-continental divide passes through Brookfield; on the eastern side of this divide, easily marked by the crest at Calhoun Road and Capitol Drive, water flows to Lake Michigan on its way to the Gulf of Saint Lawrence; on the western side of this divide, water flows to the Fox River of Illinois and Wisconsin on its way to the Mississippi River and the Gulf of Mexico.

There is a heron rookery on a site northwest of Capitol Drive and Brookfield Road. [13]

There were 14,576 households of which 31.5% had children under the age of 18 living with them, 67.4% were married couples living together, 5.4% had a female householder with no husband present, 2.6% had a male householder with no wife present, and 24.5% were non-families. 21.4% of all households were made up of individuals and 11.9% had someone living alone who was 65 years of age or older. The average household size was 2.57 and the average family size was 3.01.

There are 13,891 households out of which 36.1 percent have children under age 18 living with them, 73.1 percent are married couples living together, 5.5 percent have a female householder with no husband present, and 19.2 percent are non-families. 16.7 percent of all households are made up of individuals and 9.0 percent have someone living alone who is 65 years old or older. The average household size is 2.74 people and the average family size is 3.09 people.

Fiserv is headquartered in Brookfield. [16] The firm provides financial services technology (software, for the most part) for banks, thrifts, credit unions, securities broker dealers, leasing and finance companies, and retailers, among others. Its 2016 revenue was approximately $5.5 billion. [17]

Brookfield is represented by Jim Sensenbrenner (R) in the United States House of Representatives, and by Ron Johnson (R) and Tammy Baldwin (D) in the United States Senate. Brookfield is represented by Dale Kooyenga (R) in the Wisconsin State Senate and Rob Hutton (R) and Robyn Beckley Vining (D) in the Wisconsin State Assembly.

The Common Council is composed of 14 aldermen, with two representing each of seven districts. They serve four-year terms, with one member from each district up for election every other year. The aldermen set policy and have extensive financial control, but are not engaged in daily operational management. 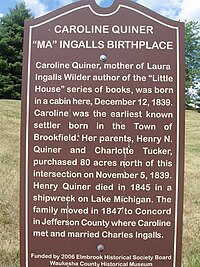 Brookfield Square is the main shopping mall for the city and also serves as a commercial anchor to the Bluemound Road shopping district serving the western suburbs of Milwaukee and Waukesha County. Brookfield has off-road bike paths throughout the city.

Brookfield Days is held annually in June, at Wirth Park supported by the local community. A farmer's market runs on weekends in summer months at the Brookfield City Hall.

The Elmbrook Historical Society hosts several events annually celebrating the lives of early Brookfield settlers, including Caroline Ingalls, who was born in the Brookfield area. The city is often visited by fans of her daughter, Laura, author of the Little House on the Prairie book series.

Brookfield has one sister city: