From Wikipedia, the free encyclopedia
U.S. Representative from Virginia

Donald Sternoff Beyer Jr. ( /ˈbaɪ.ər/; born June 20, 1950), is an American businessman, diplomat and politician serving as the U.S. Representative for Virginia's 8th congressional district since 2015. A member of the Democratic Party, his district is located in the heart of Northern Virginia and includes Alexandria, Falls Church and Arlington.

Beyer owns automobile dealerships in Virginia and has a long record of involvement in community and philanthropic work. From 1990 to 1998 he served as the 36th Lieutenant Governor of Virginia during the gubernatorial administrations of Democrat Doug Wilder (1990–1994) and Republican George Allen (1994–1998). His party's nominee for Governor of Virginia in 1997, he lost to Republican Jim Gilmore, who was then the Attorney General of Virginia. From 2009 to 2013, he served as United States Ambassador to Switzerland and Liechtenstein. [1]

In 2014, Beyer announced his candidacy for the U.S. House of Representatives seat for Virginia's 8th congressional district held by the retiring Jim Moran. Beyer won the June 2014 Democratic primary with 45% of the vote and defeated Republican Micah Edmond 63% to 33% on November 4, 2014. [2]

Beyer was born in the Free Territory of Trieste, the son of a U.S. Army officer, Donald Sternoff Beyer Sr., (1924–2017) and his wife, Nancy McDonald (d. 1999). [3] [4] His grandmother Clara Mortenson Beyer was a pioneer in labor economics and workers' rights, and worked in the United States Department of Labor under Frances Perkins during the New Deal era. [5] The oldest of six children, he was raised in Washington, D.C., where his father founded a chain of car dealerships. In 1968, he graduated from Gonzaga College High School, where he was salutatorian of his class; in 1972 he graduated Phi Beta Kappa from Williams College, magna cum laude, in economics. Beyer was a Presidential Scholar in 1968, and was a National Merit Scholarship winner. He graduated from a winter Outward Bound course at Dartmouth College in January 1971, and attended Wellesley College that year as part of the "12 College Exchange" program. [6] [7]

After college Beyer began working in his father's Volvo dealership. In 1986, Beyer and his brother Michael bought the business from their parents, and as the Beyer Automotive Group, the business expanded to nine dealerships, including the Volvo, Land Rover, Kia, Volkswagen and Subaru brands.

He served as a member of the board of Demosphere International, Inc., a leading soccer registration software provider. [9] He was also a board member of History Associates, which bills itself as "The Best Company in History." [10] He has served on the Virginia Board of First Union National Bank, the board of Shenandoah Life Insurance Company, and the board of Lightly Expressed, a fiber optic lighting design and manufacturing firm.

During nearly two decades of community activism, he has taken leadership roles on the boards of many business, philanthropic and public policy organizations, the Fairfax County Chamber of Commerce and the American Cancer Society. He has received numerous awards and honors, including the Grand Award for Highway Safety from the National Safety Federation; the James C. Wheat Jr. Award for Service to Virginians with Disabilities; [11] the Earl Williams Leadership in Technology Award; and the Thomas Jefferson Award for 2012 from American Citizens Abroad. [12] In 2017, he was given the Leaders for Democracy Award by the Project on Middle East Democracy. In April 2017, he was also awarded the Community Integration Leadership Award for Community and Public Service by the ENDependence Center of Northern Virginia, and the Community Engagement Award from Phillips Programs for Children and Families.

He chaired the board of the Alexandria Community Trust, Alexandria's community foundation, [13] and the board of Jobs for Virginia Graduates, the state's largest high school dropout prevention program. [14]

He is a former president of the board of Youth for Tomorrow, Washington Redskins' coach Joe Gibbs' residential home for troubled adolescent boys and girls. [15] He also served on the board of the DC Campaign to Prevent Teen Pregnancy. [16] He currently serves on the Board of Directors of Jobs for America's Graduates. 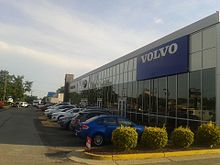 One of Beyer's automotive dealerships in Fairfax County, Virginia

Beyer was elected Lieutenant Governor of Virginia in 1989, beating Republican state senator Edwina P. Dalton. He was re-elected in 1993, beating Republican Michael Farris 54-46 percent, as Republicans George Allen and Jim Gilmore were elected on the same ballot as Governor and Attorney General, respectively.

Farris's close connection to conservative leaders such as Jerry Falwell of the Moral Majority, Pat Robertson of the Christian Coalition and Phyllis Schlafly of the Eagle Forum, as well as his adherence to the Quiverfull movement [17] [18] stirred deep-seated feelings and led some prominent Virginia Republicans such as U.S. Senator John Warner to support Beyer rather than Farris.[ citation needed]

He is also credited with writing the original welfare reform legislation in Virginia. [21]

Beyer was the Democratic nominee for governor in 1997, losing in the general election to Republican Jim Gilmore. He served as Finance Chairman for Mark Warner's Political Action Committee, "Forward Together" [22] and as the National Treasurer for the 2004 presidential campaign of former Vermont Governor Howard Dean. [23] Following Dean's withdrawal from that race, he served as chairman of the Kerry/Edwards presidential campaign in Virginia. [24] 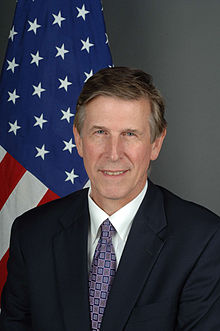 Beyer as Ambassador to Switzerland and Liechtenstein

During 2007–2008, he endorsed and campaigned extensively for presidential candidate Barack Obama. [25] He served as chairman of the Mid Atlantic Finance Council of Obama for America campaign, [26] and served on the campaign's National Finance Council.

He was appointed by the Democratic National Committee to serve at the 2008 DNC Convention on the Credentials Committee. [27]

Following the 2008 election, President-elect Obama asked Beyer to head up the transition team at the Department of Commerce. [28]

Obama nominated Beyer for the post of United States Ambassador to Switzerland and Liechtenstein on June 12, 2009. [29] In December 2010 Beyer attracted public attention when it was reported that he had warned the Swiss government against offering asylum to WikiLeaks publisher Julian Assange. [30] In March 2013 Beyer received the Thomas Jefferson Award from American Citizens Abroad. The award is presented annually by ACA to recognize State Department individuals who have rendered outstanding service to Americans overseas. Beyer was recognized for organizing a series of town hall meetings where American citizens overseas could voice concerns and opinions to officials of the State Department. He resigned as ambassador in May 2013.

During the run-up to the 2020 primaries, he endorsed Pete Buttigieg for president. [31]

On January 24, 2014, Beyer announced that he was running for Virginia's 8th congressional district in the 2014 elections to succeed retiring Democratic incumbent Jim Moran. [33] It was his first partisan race since losing the 1997 gubernatorial election. He won the June 10 Democratic primary with 45.7 percent of the vote. [34]

On November 4, 2014, Beyer faced and defeated Republican nominee Micah Edmond and three others in the general election receiving 63.1% of the votes. For all intents and purposes, however, he had effectively clinched a seat in Congress in the primary. At the time, the 8th was the second-most Democratic district in Virginia, with a Cook Partisan Voting Index of D+16 (only the 3rd district was more Democratic).

He is a member of the Congressional Progressive Caucus. [35]

Beyer is a frequent critic of the Trump administration. On April 13, 2017, Beyer was the first lawmaker to call for senior White House adviser and Trump son-in-law Jared Kushner to lose his security clearance after it was revealed that he had omitted numerous contacts with foreign nationals from his security clearance application. [37] In June 2017, Beyer renewed his call, sending a letter signed by more than 50 other House Democrats demanding the White House immediately revoke Kushner's clearance, citing national security concerns. [38]

Beyer and his wife, Megan, have two children, Clara and Grace. In addition, he has two children, Don and Stephanie, from a previous marriage, [45] and two grandchildren. [46]