From Wikipedia, the free encyclopedia
Sailing vessel
For other uses, see Schooner (disambiguation). 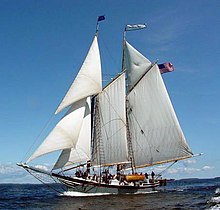 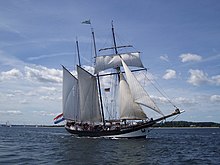 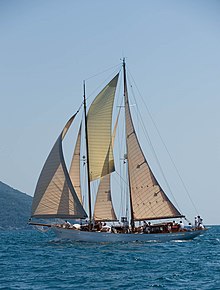 A schooner ( /ˈskuːnər/) is a type of sailing vessel defined by its rig: fore-and-aft rigged on all of 2 or more masts and, in the case of a 2 masted schooner, the foremast generally being shorter than the mainmast. A common variant, the topsail schooner also has a square topsail on the foremast, to which may be added a topgallant and other square sails, but not a fore course, as that would make the vessel a brigantine. Many schooners are gaff-rigged, but other examples include Bermuda rig and the staysail schooner. [1]:211 [2]:26 [3]:100

The origins of schooner rigged vessels is obscure, but there is good evidence of them from the early 17th century in paintings by Dutch marine artists. The name "schooner" first appeared in eastern North America in the early 1700s. [4] The name may be related to a Scots language word meaning to skip over water, [5] or to skip stones. [6]

It is not known when the rig now termed "schooner" appeared. The earliest known illustration of a schooner depicts a yacht owned by the burgomasters of Amsterdam, drawn by the Dutch artist Rool and dated 1600. Later examples show schooners in Amsterdam in 1638 and New Amsterdam in 1627. Paintings by Van de Velde (1633-1707) and an engraving by Jan Kip of the Thames at Lambeth, dated 1697, suggest that schooner rig was common in England and Holland by the end of the 18th century. The Royal Transport was an example of a large British-built schooner, launched in 1695 at Chatham. [7]:13 [3]:233 [8]

The type was further developed in British North America starting around 1713. [5] In the 1700s and 1800s in what is now New England and Atlantic Canada schooners became popular for coastal trade, requiring a smaller crew for their size compared to then traditional ocean crossing square rig ships, [9] and being fast and versatile. [10] Three-masted schooners were introduced around 1800. [8]

Schooners were popular on both sides of the Atlantic in the late 1800s and early 1900s. By 1910, 45 five-masted and 10 six-masted schooners had been built in Bath, Maine and other Penobscot Bay towns. The Thomas W. Lawson was the only seven-masted schooner built.

Although highly popular in their time, schooners were replaced by more efficient sloops, yawls and ketches [10] as sailboats, and in the freight business they were replaced by steamships, barges, and railroads. [11]

Various types of schooners are defined by their rig configuration. Most have a bowsprit although some were built without one for crew safety, such as Adventure.

The following varieties were built:

Tern schooner at dockside c. 1910. This design is notable for all three masts being of equal height.

Schooners were built primarily for cargo, passengers, and fishing.

The Norwegian polar schooner Fram was used by both Fridtjof Nansen and Roald Amundsen in their explorations of the poles.

Bluenose was both a successful fishing boat and a racer. America, eponym of America's Cup, was one of the few schooners ever designed for racing. This race was long dominated by schooners. Three-masted schooner Atlantic set the transatlantic sailing record for a monohull in the 1905 Kaiser's Cup race. The record remained unbroken for nearly 100 years. [13]