The Ho-Chunk Nation (Hoçak) has traditional territory located across five states in the United States. It was formerly known as the Wisconsin Winnebago Tribe, It is one of two federally recognized tribes that were once a single tribe formerly known as Winnebago. The other federally recognized tribe is the Winnebago Tribe of Nebraska. The tribe separated when its members were forcibly relocated first to a reservation in Minnesota, and later to the current reservation in Nebraska. The name Ho-Chunk comes from the word Hochungra, meaning "People of the Big Voice" or "People of the Sacred Language." [3]

The Ho-Chunk Nation is considered a "non-reservation" tribe with many tribal members who privately own their own land, and the tribe stewards and maintains parcels of land placed in Trust as Indian Trust Land as designated by the federal government, Secretary of the Interior and Bureau of Indian Affairs (BIA) spread over Dane, Jackson, Juneau, Monroe, Sauk, Shawano, and Wood counties, Wisconsin. In 1990, the land designated as trust land was 4,200 acres (17 km2) in size. [4]

The Ho-Chunk Nation is headquartered in Black River Falls, Wisconsin. [5] With the adoption of its most recent constitution in 1994, which restored the tribe's name from the Wisconsin Winnebago back to its own name for itself, the Ho-Chunk Nation, the modern tribal government structured itself after the federal and state governments, with executive, legislative and judicial branches. All of the tribe's members make up the fourth branch of government, the general council. The current administration is as follows.

The Ho-Chunk relied on agricultural products for subsistence, including corn, squash, beans, and other products which they stored in fiber bags and pits dug in the ground for winter use. They traveled up the Fox and Wisconsin rivers to hunt both small and large game, crossed the Mississippi to reach the prairies to hunt buffalo, and also fished in nearby rivers and lakes. [9]

The Ho-Chunk held many ceremonies. The major summer ceremonial was the Medicine Dance, which included a secret ceremony for members of the Medicine Dance Society, a religious society open to both men and women, as well as public rituals. The winter feast was a clan ceremony intended to increase war and hunting powers; the spring Buffalo Dance was a magical ceremonial for calling the bison herds. [10]

Ho-Chunk women were responsible for growing and gathering food for their families, including agricultural products and a wide variety of roots, nuts and berries, as well as sap from maple trees. In addition, women learned to recognize and use a wide range of roots and leaves for medicinal and herbal purposes. Women also cooked game and prepared food and meals for the hunters to sustain them while traveling. They also tanned the hides to make clothing and storage bags. [11]

Ho-Chunk men were hunters as well as warriors in times of conflict. As hunters, they would catch fish by spearing them and clubbing the fish to death. The men would also hunt game such as muskrat, mink, otter, beaver, and deer. [12] Leaders among the men acted in political relations with other tribes. Some men created jewelry out of silver and copper that both men and women would wear. To become men, boys would go through a rite of passage at puberty, fasting for a period, in hopes of acquiring a guardian spirit. [13]

The Ho-Chunk Nation speaks Ho-Chunk language, which is a Chiwere-Winnebago language, part of the Siouan-Catawban language family. [2] 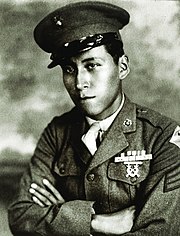 Mitchell Red Cloud Jr., tribal member and decorated Marine who was killed in combat in Korea

The Ho-Chunk Wazijahaci have a long history before 1492 which is not recognized by modern scholars, academics, and other social scientists. There are stories that mention living through three ages. When Jean Nicolet landed in 1634 he thought he was landing in China. Oral history suggests some of the tribe may have been forcibly relocated up 13 times by the US federal government to steal land, which is estimated at 30 million acres in Wisconsin alone. In the 1870s, a majority of the tribe returned to their homelands in Wisconsin. Under the Homestead Act, some tribal members gained title to 40-acre (16 ha) parcels of land. [3]