From Wikipedia, the free encyclopedia
This article is about the convenience store and gas station chain. For the service organization, see Circle K International. For the kosher food markings symbol, see OK Kosher Certification. For other uses, see Circle-k (disambiguation). 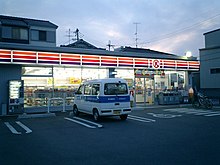 Circle K Stores, Inc. is an international chain of convenience stores, owned by the Canadian multinational Alimentation Couche-Tard. Founded in 1951 in El Paso, Texas, the company filed for bankruptcy protection in 1990 and went through several owners, before being acquired by Alimentation Couche-Tard in 2003. [2] [1] As of February 2020, Circle K has 9,799 stores in North America (primarily in the United States and Canada), 2,697 stores in Europe, and an additional 2,380 stores operating under franchise agreements worldwide. [1]

Within the United States, Circle K owns and operates stores in 48 states, [1] [10] with the largest concentration of stores found in Arizona, California, Colorado, Florida, Georgia, Illinois, Louisiana, North Carolina, Ohio, South Carolina, and Texas. [11] Fuel is sold under various brands, with the Circle K and Shell brands as the most common. Other brands of fuel sold at Circle K stores include Valero, BP, Exxon, Marathon, Irving, Mobil, and Phillips 66. Approximately 13% of stores worldwide do not sell gasoline. [1]

Circle K operates stores in the United States, Canada, and Europe (the Nordics, Baltics, Poland, Russia, Ireland and the United Kingdom), and has franchises in Mexico (it partners with the Mexican stores " Tiendas Extra" created by Modelo Group), Cambodia, China, Egypt, Guam, Honduras, Hong Kong, Indonesia, Jamaica, Macau, Mongolia, New Zealand, Saudi Arabia, the United Arab Emirates and Vietnam. [1] [10] In Hong Kong, the stores are called OK in reference to the circle around the K. Circle K Hong Kong was founded in 1985 by Li & Fung Retailing (later Fung Retailing) as licensee of the name and is now part of Convenience Retail Asia Limited. [12] Circle K currently has 387 franchised locations throughout Hong Kong as of May 2020. [12] [13]

The Circle K brand entered the Canadian market in 2008, in connection with Couche-Tard's acquisition of Irving Oil's convenience store network. [14] [15] By 2019, more than 800 Mac's branded stores had been rebranded to Circle K throughout central and western Canada. [16] [3]

In September 2015, Couche-Tard announced that Circle K will become the worldwide brand of all of its convenience stores, replacing Mac's, Kangaroo Express, and Statoil brands (except the Couche-Tard brand in Quebec and the INGO brand in Europe). [3] [10] This global rebrand included the introduction of a new logo incorporating elements of its existing brands, improvements to its product offerings and technology, and investing in store-level improvements aimed at improving the customer experience. [10] [3] The rebranding occurred over the following five years and as of March 2020, all of Europe and 85% of North America had been updated with the Circle K brand and logo. [10]

Entrepreneur Fred Hervey purchased three Kay's Food Stores in El Paso, Texas, in 1951. [17] Hervey renamed the stores as "Circle K Food Stores, Inc." rather than "Kay." He grew the Circle K chain into neighboring New Mexico and Arizona, which has been the company's home base since 1957. (Hervey would go on to serve two terms as mayor of El Paso.)

Karl Eller, a prominent Phoenix businessman, served as the company's CEO from 1983 to 1990. During that time, Eller built Circle K into the second largest convenience store operation and the largest publicly owned convenience store chain in the U.S. with 4,631 stores in 32 states and an additional 1,300 or so licensed or joint venture stores in 13 foreign countries. Under Eller's leadership, the company grew from annual sales of $747 million to over $3 billion.

In 1988, the company sent a letter to its over 8,000 employees announcing that it will cut off the medical coverage of those who become sick or injured as a result of AIDS, alcohol, drug abuse or self-inflicted wounds. The company stated that "There are certain lifestyle decisions that we are just not going to assure the results of." [18]

Fortunes declined in the late 1980s as the US economy began to slow down, and Circle K filed for Chapter 11 bankruptcy protection in May 1990; Eller resigned as CEO. Some underperforming locations were sold or closed. In 1993 the company was purchased by Investcorp, an international investment group, and emerged from bankruptcy.

In 1996, Circle K was acquired by Tosco Corporation, an independent petroleum refiner and marketer, but kept its headquarters in Phoenix. Tosco was purchased in 2001 by Phillips Petroleum, which, in 2002, merged with Conoco to form ConocoPhillips. In 2003, Circle K was purchased by Alimentation Couche-Tard , a large, multinational convenience store operator based in the Montreal area, for US$804 million.[ citation needed]

In 2006, the company acquired the 90-store Spectrum chain serving Georgia and Alabama, [20] the CFM chain in Missouri, 35 Sterling Dairy locations in Northwest Ohio, and 26 stores under various brands from Chico Enterprises of Morgantown, West Virginia. [21] This came after the 2005 rebranding of the various Couche-Tard stores ( Mac's, Bigfoot, Dairy Mart, and Handy Andy) under the more nationally known Circle K brand. [22]

In mid-2006, Alimentation Couche-Tard entered into a franchising agreement with ConocoPhillips to brand some of its company-owned stores as Circle K, in the western portion of the US. ConocoPhillips remodeled the stores into the Circle K scheme but continued to operate them. The stores continued to have the new ConocoPhillips unified canopy design and ProClean gasolines. These stores were spun off as Phillips 66 in May 2012.

Another oil company, Canada-based Irving Oil, leased out its convenience stores operating under the Bluecanoe and Mainway banners in the United States and Atlantic Canada to Couche-Tard, which rebranded the locations to Circle K in July 2008, while still selling Irving-branded fuel. However, the Mainways in Newfoundland and Labrador did not change until summer 2010. The parties had earlier formed a similar partnership in Quebec, with the stores there operated as Couche-Tard.

In April 2009, ExxonMobil sold 43 Phoenix stores to parent company Couche-Tard as part of a sale of the larger On the Run franchise. These 43 stores were to be rebranded under the Circle K name. [23]

On February 10, 2014, Modelo Group Sold the Tiendas Extra brand of stores to the Mexican franchise of Circle K, Circulo K.

A Circle K with an Exxon fuel station in North Richland Hills, Texas.

On December 18, 2014, Couche-Tard announced its acquisition of The Pantry for $860 million all-cash tender. The acquisition closed in March 2015. [24] Following the closing, all stores that were owned and operated by The Pantry, many of them under the "Kangaroo Express" name, are expected to be rebranded under the Circle K banner. [25]

A Circle K in Markham, Ontario, converted from an On the Run store after its purchase from Imperial Oil.

On September 23, 2015, Couche-Tard unveiled a refreshed brand identity for Circle K, and announced that the Statoil (Northern, Central and Eastern Europe) and Mac's (English Canada) brands would be converted to Circle K. [26] [27] [28]

In 2017, Couche-Tard completed its acquisition of CST Brands, adding stores formerly owned by Valero Energy, and a portion of the Ultramar chain in Canada to Circle K (with the latter also switching fuel suppliers to Irving). [31] [32] [33]

Also in 2017, Couche-Tard also acquisitioned Holiday Stationstores, a Minnesota-based chain of gas stations based in the midwest United States. [34] Couche-Tard and Circle K refer to this as their Northern Tier of United States stores, and the stores are expected to keep the Holiday name.

Fountain drinks at Circle K are sold in Polar Pop cups (previously called Thirst Busters), available in expanded polystyrene cups; in areas where polystyrene containers are illegal, plastic cups are offered. Most American locations offer any size of 32 ounce or under for under one American dollar, except for their 52-ounce or above cups, which are priced at over a dollar. The price point of its 44 ounce size (marketed as "Epic XL" in some regions) may vary, as it may be under or over $1, depending on region. The 52-ounce cups are plastic.

Circle K was a part-time primary sponsor of the No. 28 IndyCar Series racecar driven by Ryan Hunter-Reay of Andretti Autosport between 2011 and 2013. In 2014 it switched to KVSH Racing driver Sébastien Bourdais. Circle K, along with Oberto Sausage Company, currently sponsors Marco Andretti.

In 2017, Circle K went to NASCAR in sponsoring Matt Kenseth and Joe Gibbs Racing for six races with a full livery.

Due to its sizable presence in Greater Cleveland from the former Lawson/Dairy Mart stores, Circle K sponsors the Cleveland Indians strikeout sign in center field at Progressive Field in Cleveland, where the "K" logo represents the "K" used for strikeouts in traditional baseball scorekeeping and is replicated with each strikeout. The same sponsorship is in place with the Arizona Diamondbacks at Chase Field; if the Diamondbacks strike out ten batters or more, that game's attendees receive a voucher for a free cup of Polar Pop, while Indians fans receive the same voucher after select home games.

In May 2017, a sponsored Circle K Power Cube was introduced into the online game Ingress. [37]

The former Circle K logo. It can still be seen in New England, Canada, Hong Kong and Macau.