Northern Arizona University (NAU) is a public research university with its main campus in Flagstaff, Arizona. [9] Governed by the Arizona Board of Regents and accredited by the Higher Learning Commission, the university offers 158 baccalaureate and graduate degree programs.

As of fall 2019, 30,736 students were enrolled, 22,791 at the Flagstaff campus. [7] The average cost of tuition and fees for a full-time, Arizona resident undergraduate student for two semesters was $11,896 in 2018, [10] and out-of-state undergraduates paid an estimated $26,516. [11] NAU also participates in the Western Undergraduate Exchange Program, which offers lower tuition rates for students from the Western United States. For 2018–19, WUE tuition and fees are $16,759. [12] NAU offers Flagstaff undergraduate students the Pledge Program, which guarantees the same tuition rate for four years. 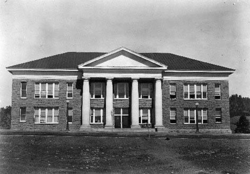 Initially named the Northern Arizona Normal School, the institution opened on September 11, 1899, with 23 students, two faculty members—one, Almon Nicholas Taylor, who was also the school president—and "two copies of Webster's International Dictionary bound in sheepskin" as teaching resources. [13] The first graduating class, in 1901, consisted of four women who received credentials to teach in the Arizona Territory. In 1925, the Arizona State Legislature allowed the school, which was then called the Northern Arizona State Teachers College (ASTC), to grant bachelor of education degrees. In 1929, the school became Arizona State Teachers College at Flagstaff. [14]

Also in 1929, the Great Depression struck the nation, and the ASTC found new meaning in community outreach. Rather than collapsing, the school endured through the depression. In fact, Grady Gammage, the school president at the time, described higher education as "a 'depression industry' that fared well in hard times." Despite financial difficulties, enrollment increased from 321 students to 535 students between 1930 and 1940, and graduate work was introduced in 1937. [15]

ASTC provided an education during economically trying times, often creating jobs to help students afford their education; they worked in the school-owned dairy farm, in the campus kitchen and dining hall, and as newspaper deliverers. The self-sufficiency of the college helped conserve monetary resources, and it was a major contributor to the local economy of the surrounding Flagstaff community, injecting almost a half million dollars in 1938. [16]

ASTC was known for its diverse student body and ethnic tolerance. In fact, the first Hopi to receive a college degree was Ida Mae Fredericks in 1939. [16] Students came from rural farms, mining families, the East Coast, and points between. During the depression, fraternities and clubs sprang up, reflecting the diversity of background and interests.

Enrollment dropped sharply at the beginning of World War II, dropping to 161 in 1945. [17] During this time, ASTC became a Navy V-12 program training site. [18] However, the end of World War II brought increased enrollment as returning veterans continued their education.

On October 9, 2015, Steven Jones, an 18-year-old freshman at Northern Arizona University, killed one person and injured three others in a shooting outside Mountain View Hall. [19]

Perched at 6,950 feet (2,120 m) above sea level, and one of the highest-elevation, four-year college campuses in the country, the main campus is surrounded by the largest contiguous ponderosa pine forest in the world [20] and enjoys a four-season climate, with an average annual snowfall of 260 inches. Winter skiing is accessible at Arizona Snowbowl, an alpine ski resort located on the San Francisco Peaks, 7 miles (11 km) northwest of Flagstaff, [21] ranked the third-best college town in the United States by the American Institute of Economic Research in 2017. [22]

NAU offers 153 baccalaureate programs, 81 master's degree programs, and 15 doctoral programs, along with 49 undergraduate and 30 graduate certificates. In 2006, the Arizona Board of Regents directed the university to develop innovative ways to provide access and affordability to all Arizona residents. NAU developed the Pledge Program and 2NAU partnerships with community colleges and NAU–Yavapai, a collaboration with Yavapai College in Prescott Valley, Arizona. NAU–Yuma, a quarter-century partnership with Arizona Western College, is nationally recognized as a model community college/university effort.

In addition to the more than 22,000 students who study on the Flagstaff campus, NAU currently serves another 8,000 students online and statewide. NAU offers 99 online accredited degree programs at statewide campuses. The university's oldest branch campus, and the largest, is NAU Yuma.

NAU is the first public university to offer a competency-based online degree program that allows students to earn credit for experience. Personalized Learning, launched in 2013, is an online, competency-based degree path. The program offers students access to a high-quality, self-paced, affordable college education.

In the fall of 2017, the top undergraduate academic degree plans by enrollment were Biomedical Sciences, Criminology and Criminal Justice, Nursing, Nursing – Option for Registered Nurses, Mechanical Engineering, and Elementary Education. [7]

College of Arts and Letters

The College of Engineering, Informatics, and Applied Sciences is NAU's newest college.

College of the Environment, Forestry, and Natural Sciences

The College of the Environment, Forestry, and Natural Sciences has undergraduate and graduate programs that integrate science and mathematics through the creative application of knowledge.

College of Health and Human Services

College of Social and Behavioral Sciences

The W.A. Franke College of Business

The W.A. Franke College of Business's primary focus is undergraduate education, but it also offers master's-level education and research opportunities. Businessman Bill Franke's commitment of $25 million resulted in the renaming of the college in his honor. The W. A. Franke College of Business was fully reaccredited in fall 2008 by the national accrediting body, the Association to Advance Collegiate Schools of Business – AACSB International. NAU's program is one of about 500 accredited programs among the more than 1,000 throughout the nation. In 2006, the college moved into a new, 111,000-square-foot (10,300 m2), LEED-certified building. [40]

The Honors College offers coursework, research opportunities, and programs designed to enhance the undergraduate experience. Students can participate in field experiences such as the Grand Canyon Experience, which allows them to do in-depth study along the Colorado Plateau. Students also have the option of living in the Honors Residence College, which opened in August 2018 and offers learning and study spaces in the same building in which students live. [41] 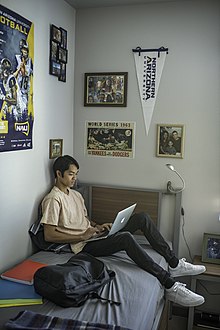 Northern Arizona University has 21 residence halls on its Flagstaff campus. [45]

Upper-division housing is available only to sophomores, juniors, and seniors. [48]

Rising juniors and seniors currently living on campus have priority leasing status for university-partnered housing located on campus. [48] These halls are located on the NAU campus, but are operated by American Campus Communities: The Suites, Hilltop Townhomes, and Skyview. [52]

The Rolle Activity Center provides physical education classrooms and contains courts for recreational and varsity sports, including NAU's volleyball team, with seating for almost 1,100. The building is named after Joseph C. Rolle—“Mr. Lumberjack” in 1989. Rolle played basketball from 1937 to 1941, served as student body president, and received a BA in 1941 and MA in education in 1950 from Arizona State College of Flagstaff. He later earned an EdS from Columbia University and then worked at NAU for 36 years in positions ranging from bookstore manager to Dean of Students and Dean of University Services. [55]

The Wall Aquatic Center in the Aquatic and Tennis Complex is one of the finest high-altitude swimming facilities in the world. [56]

The Lumberjacks won the NCAA Men's Division I Cross Country Championship in 2016, 2017, and 2018. [57] The 2017 repeat title closed out a perfect season with a 53-point victory, placing five athletes in the top 40. The victory was the lowest score (74) at the NCAA Championships since 2014, and the Lumberjacks became the first repeat champions since 2013–14. [58] Director of Cross Country and Track and Field Michael Smith earned the Bill Dellinger Award as National Men's Coach of the Year and also picked up both the Big Sky's Men's and Women's Coach of the Year awards. In track and field, Smith was named the U.S. Track & Field and Cross Country Coaches Association (USTFCCCA) Mountain Region Women's Indoor Coach of the Year in 2017 and 2018.

Because of its high elevation, NAU's facilities are sometimes used for altitude training by endurance athletes.

Students can work at The Lumberjack, covering news of NAU and the region for Jackcentral.com and social media, and a print edition circulated throughout Flagstaff. The student-run newspaper is more than a century old and has numerous journalism awards to its credit. [63] [64]

The MIC sports team is a multimedia organization allowing students to cover sports across Arizona for TV, online, social media, and print.

Students also produce NAZ Today, which is broadcast on cable television throughout northern Arizona. It is the only local newscast in the region. In 2018, NAZ Today received national recognition from the Broadcast Education Association for " best student television newscast produced more than four days weekly." Students in NAU's Strategic Communication program publish NAZ Today stories on Facebook and Twitter, and maintain the show's website.

NAU's televised news program, NAZ Today, airs Monday through Thursday in Flagstaff on NPG cable channel 4; formerly, it also aired on UniversityHouse (Dish Network channel 9411) until it folded. Since the shutdown of Channel 2 news in August 2008, NAZ Today is now the only TV news source for the Flagstaff area.

The NAU Recreation Center was remodeled in the fall of 2011, creating the NAU Health and Learning Center in its place. Features include an indoor jogging track, a 38-foot climbing wall, a large weight room, a multipurpose gym, a cardio theatre, and 123,000 square feet of recreation opportunities. The Health and Learning Center also includes all of the on-campus medical services (previously housed in the Fronske Health Center), a pharmacy, and the offices for Disability Resources on campus. [65]

Movies and other events

Unions and Student Activities offers many services and events for the campus community, such as movies and the popular Friday night AfterHours program produced by Sun Entertainment. SUN also presents concerts, comedians, free movies, trivia nights, dodgeball, and many other special events each year. The College of Arts and Letters presents classic films every Tuesday night during the school year and more than 400 music and theatrical performances, lectures, films and art exhibitions annually.

The Arizona Cardinals of the NFL conducted their summer training camp at Northern Arizona University's Flagstaff campus for many years until 2013. [68] The Cardinals left Flagstaff to conduct their camp in Glendale in 2013. [69] Beginning in 2014, NAU entered into partnerships with the Phoenix Suns and the Phoenix Mercury of the NBA and WNBA respectively. [70]