From Wikipedia, the free encyclopedia
For the professor, see Gregory Stanton.
U.S. Representative from Arizona

Gregory John Stanton (born March 8, 1970) is an American politician serving as the U.S. Representative for Arizona's 9th congressional district since 2019. The district includes most of southern Phoenix, as well as all of Tempe and portions of Scottsdale, Mesa and Chandler.

A member of the Democratic Party, he served as Mayor of Phoenix from 2012 to 2018. He won the November 8, 2011 runoff election to succeed term-limited mayor Phil Gordon. A former Phoenix City Councillor, defeated Republican political consultant/lobbyist Wes Gullett after a contentious campaign that resulted in large election turnout. [1] Stanton was sworn in as Mayor of Phoenix in January 2012 [2] and resigned on May 29, 2018, in order to run for U.S. Congress.

Stanton was born in Long Island, New York. His family moved to Arizona and he graduated from Cortez High School of west Phoenix in 1988. [3] [4] He then attended Marquette University and graduated in 1992 with a B.A. in history and political science and was a member of Phi Beta Kappa. In 1995, Stanton earned his J.D. from the University of Michigan Law School. Stanton then worked as an education attorney from 1995 to 2000. [3] In 2014, Stanton became an adjunct professor at Arizona Summit Law School. [5]

Stanton was elected to the Phoenix City Council for District 6 in 2000, 2001, and 2005 and served the district until 2009. [3] This district included the affluent Phoenix Biltmore Area centered around the Biltmore Fashion Park and Arcadia areas, as well as non-contiguous Ahwatukee. [6] 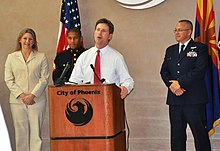 During his 2011 campaign for mayor, questions arose of the legality of near $70,000 in contributions from Stanton's former treasurer Mindy Shields. [7] Stanton opposed the embezzlement prosecution of Shields and fired her in October 2010. [8]

On August 30, 2011, Stanton and Republican candidate Wes Gullett were the top two candidates in the Phoenix mayoral primary, with Stanton getting about 38% of the vote and Gullett 20%. [9]

Stanton advocated against the 2013 federal budget sequestration by meeting with members of Congress multiple times. [10]

Mayor Stanton was re-elected on August 25, 2015. In 2017, Governing magazine named Stanton one of its Public Officials of the Year for his efforts to expand light rail, bike lanes, and sidewalks while reducing the city's greenhouse gas emissions. [11]

After incumbent Democratic congresswoman Kyrsten Sinema decided to run for the US Senate in 2018, to replace retiring U.S. Senator Jeff Flake, Stanton – who was term-limited as mayor – decided to run for Sinema's seat in the 2018 election for the 9th District. [12]

Per Arizona's resign-to-run laws, Stanton resigned as mayor on May 29, 2018, to focus on his congressional campaign. Stanton ran unopposed in the Democratic primary. On November 6, he defeated Republican Steve Ferrara 61% to 39% following a campaign during which he stressed his problem solving experience as mayor. [13]

In an interview a few weeks after the November 2011 election, Stanton stated his support for repealing the city food tax. [14] Stanton also supported public pension reforms including more employee contributions to their own retirement funds and longer work experience before retirement benefits. [14] However, in March 2013, Stanton decided against repealing the food tax due to projections that ending the tax would cause layoffs of nearly 99 police officers and 300 other city employees. [15]

As a Representative, Stanton supported the Equality Act, a bill that would expand the federal Civil Rights Act of 1964 to ban discrimination based on sexual orientation and gender identity. [16]