Fountain Hills is a town in Maricopa County, Arizona, United States. Known for its impressive fountain, once the tallest in the world, it borders on the Fort McDowell Yavapai Nation, Salt River Pima-Maricopa Indian Community, and Scottsdale, Arizona. The population is 22,489, as of the 2010 census. [3] Between the 1990 and 2000 censuses it was the eighth-fastest-growing place among cities and towns in Arizona.

Before the development of Fountain Hills, the area was home to the Yavapai, and petroglyphs can be found near the Dixie Mine in the northwest corner of the town along the mountains. 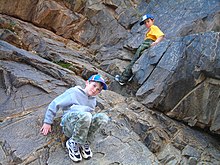 Two boys posing at the petroglyphs by the Dixie Mine, Fountain Hills, AZ

In the early 20th century, the area that became Fountain Hills and the McDowell Mountain Regional Park was part of the Pemberton Ranch, [5] later renamed the P Bar Ranch. Fountain Hills High School is built on the site of one of the P Bar Ranch's buildings, and a plaque stands in the parking lot to commemorate this.

Fountain Hills was developed by C. V. Wood, president of McCulloch Oil, and was named after the towering man-made fountain in the center of town. [6] [7] It was incorporated in 1989. [8]

To the east of the town is the Verde River, a tributary to the Salt River. Inside the town there are many washes that run through Fountain Hills into the Verde River. Some of these washes include the Ashbrook, Balboa, Legend, and Colony Washes. During times of rain the washes flood with water and can sometimes block roads with their water. Signs mark several of the intersections of washes and major streets in the town.

To the southwest and northwest regions of Fountain Hills are the McDowell Mountains, a chain of extinct volcanic mountains. The highest mountains in the range are East End (4,033 ft (1,229 m)) and Thompson Peak (3,910 ft (1,190 m)).

This area has a large amount of sunshine year round due to its stable descending air and high pressure. According to the Köppen Climate Classification system, Fountain Hills has a hot desert climate, abbreviated "Bwh" on climate maps. [9]

There were 10,339 households, out of which 18.6% had children under the age of 18 living with them, 59.4% were married couples living together, 6.7% had a female householder with no husband present, and 31.1% were non-families. Householders living alone make up 25.7% of all households, and 11.5% had someone living alone who was 65 years of age or older. The average household size was 2.16 and the average family size was 2.56.

Fountain Hills has the world's fourth-tallest fountain. It was built in 1970 in Zürich, Switzerland by Robert P. McCulloch, the year before the reconstruction of the London Bridge in Lake Havasu City, another of McCulloch's projects. The fountain sprays water for about 15 minutes every hour on the hour between 9am and 9pm. The plume rises from a concrete water-lily sculpture in the center of a large man-made lake. The fountain, driven by three 600 horsepower (450 kW) turbine pumps, sprays water at a rate of 7,000 US gallons (26,000 l; 5,800 imp gal) per minute through an 18-inch (460 mm) nozzle. With all three pumps under ideal conditions, the fountain reaches 560 feet (170 m) in height, [12] though in normal operation only two of the pumps are used, with a fountain height of around 300 feet (91 m). When built it was the world's tallest fountain, a record it held for over a decade. [13]

The town has three annual fairs—a local art fair, the Fountain Hills Great Fair, which incorporates arts and a carnival, and the Thunderbird Artists' Fountain Hills Fine Art & Wine Affaire. Each year, the water in the town's fountain is dyed green in celebration of St. Patrick's day. [14] Fountain Hills Theater is an award-winning performing arts venue entering its 28th season and offering over 16 productions a year to local communities as well as performing an arts education year round for youth.

The town contracts its law enforcement services with the Maricopa County Sheriff's Office.

Fountain Hills' Fire Department has two fire stations and contracts with Rural Metro for staffing of its fire department. Dave Ott is the Fire Chief.

The Fountain Hills Times is the town's weekly newspaper and is published in Fountain Hills. [16] The paper has a weekly circulation of about 3,000. [17]