Bassist Garrett Nickelsen and drummer Patrick Kirch had been playing in local bands together, and when one of them disbanded in 2006, they opted to start over with a new name and sound. Singer John O'Callaghan joined soon after auditions - with no prior vocal experience - along with guitarists Alex Ross and Ryan Osterman, officially forming The Maine in January 2007. [2] Together, they released the EP Stay Up, Get Down. Months later Osterman left the band and was replaced by Kennedy Brock, and Alex Ross was replaced by Jared Monaco. The Maine signed to Fearless Records and on December 11, 2007, they debuted a five-song EP entitled The Way We Talk, produced by Matt Grabe. [3] 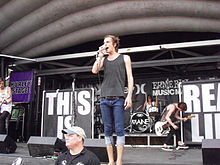 The Maine performing at Warped Tour in Charlotte, NC on July 23, 2009

The Maine's first full-length album, Can't Stop Won't Stop, was produced by Matt Squire [4] and was released in the summer of 2008, just before the band toured with Good Charlotte and Boys Like Girls. In the fall of 2008, The Maine and We the Kings supported The Academy Is... on their tour in the United Kingdom.

The band's next release was a holiday EP in December 2008 titled ...And a Happy New Year, produced by Matt Grabe. [3] The EP included three new original tracks and a cover of the Wham! song " Last Christmas". In 2009, the band signed to Warner Bros. Records. [5] In February 2009, The Maine and We the Kings headlined the 'Secret Valentine' tour, along with The Cab, VersaEmerge and There For Tomorrow. Furthermore, in July, the band performed on the Vans Warped Tour, a popular touring music festival.

The band embarked on their first headlining tour in 2010, An Evening with The Maine.

In February 2011, The Maine set off on an international tour that began in the Philippines. From there, the members traveled to Australia and performed at Soundwave. They re-joined Never Shout Never for a European tour culminating in the U.K.. In April 2011, the band co-headlined a U.S. tour with Augustana, lasting from early May to June 18, 2011. [7] The band toured with Taking Back Sunday and Bad Rabbits in October 2011.

In mid-2011, the band confirmed that it is working on a new album titled Pioneer. During this time, The Maine had been playing 3 new previously unreleased songs on tour and performed one live exclusively for Fuel. TV, "Don't Give Up on Us". [8]

The band announced via Facebook that it was to headline a tour in the fall of 2011 to promote its third studio album, Pioneer. The album features the popular songs "Don't Give Up On Us", "My Heroine" and lead single "Some Days". It was released on December 6, 2011 independently through Action Theory Records. [9] The album was available to pre-order officially on November 1, 2011. On the band's Facebook page, the song Don't Give Up On Us was offered as a free download. [10] In addition, the single Some Days was available for download on iTunes beginning November 15, 2011.

The band released a music video, "Misery," from its album Pioneer, on February 16, 2012. The band also released a cover of The Beatles' hit " With A Little Help From My Friends" on Spotify. The song was recorded along with touring mates, American alternative band, Lydia and, Canadian indie-rock band, Arkells.

On September 11, 2012, The Maine re-released Pioneer as "Pioneer and The Good Love". The album, released via Rude Records, contains 6 previously unreleased tracks. They also released an EP version of the unreleased tracks under the name of “Good Love“.

On April 12, 2013, the band announced that their fourth studio album Forever Halloween would be released on June 4, 2013. The album was released independently in the US in partnership with their management team 8123, via Universal Music in Canada, and Rude Records in Europe, UK, Australia and Japan. It sold over 10,000 copies in its first week, debuting at number 39 on the Billboard 200. [11]

"Happy" was the first single of the album released on April 15, 2013, followed by "Love and Drugs" which was released with a lyric video on May 6, 2013. The third single "These Four Words" was released on the same day as the album, with an official music video that premiered on YouTube and Vevo. [12] The single-shot video was directed by Daniel Gomes and the song is what frontman John O'Callaghan called the “most revealing song [he] has ever written”. [13]

The first single from the album, English Girls, dropped February 11, 2015 with a debut at #17 on the iTunes Alternative Chart. [15] The second single from the album, "Miles Away" debuted at #16 on the iTunes Alternative Chart on March 10, 2015. Verity Magazine infers, "Miles Away" is a more relaxed and laid back track, but nonetheless, you'll still want to get up and dance. The last song they released, "English Girls" was very upbeat and just spilling positive vibes, which is quite a stark contrast to their slower and darker previous album Forever Halloween. From the two tracks released so far, this album is sounding more like older albums from The Maine like Pioneer and Black and White". "Same Suit, Different Tie" was released via SoundCloud the day before the album was set to release. In order to celebrate the release of the album, The Maine hosted "24 Hours of American Candy", where they live streamed their activities on the release day of American Candy.

The tour for this album took place in Spring 2015 with Real Friends and Knuckle Puck and The Technicolors. [16]

The band were on the main stage for the entirety of the 2016 Vans Warped Tour, announcing that this would be their last tour before they headed into the studio to record their sixth studio album, scheduled for release in 2017. [17]

Pat Kirch performing on the Lovely Little Lonely tour at The Crofoot in Pontiac, Michigan on May 5th, 2017

Lovely Little Lonely, was released on April 7, 2017. The first single from the album, "Bad Behavior", was released on January 19, 2017. The second single, "Black Butterflies and Deja Vu", was released on March 2, 2017. The Maine created and headlined the first 8123 Fest in honor of their 10-year anniversary. 8123 Fest was held in The Maine's hometown of Phoenix, Arizona at the Crescent Ballroom where 3,000 fans came together for the sold out festival.

Prior to the release of the album, The Maine announced their Lovely Little Lonely World Tour which would occur in Fall 2017.

On December 6, 2018, frontman John O’Callaghan tweeted that recording for their seventh album was complete. [19] The title of the album, You Are OK, was announced on January 16, 2019 along with the release of the lead single, "Numb Without You". [20] To celebrate the 10th anniversary of their first album Can't Stop Won't Stop, the band performed headlining sets on January 18 and 19, 2019, at their own music festival, 8123 Fest. At the same year, they created a new festival called Sad Summer Fest. [21] Mayday Parade, We the Kings and Just Friends also performed at the festival. [21] During the Summer of Sad Summer Fest, Pat Kirch and his soon-to-be wife announced that they are expecting their first born. [22] After Sad Summer Fest, The Maine went on their own tour called The Mirror. [22]

Aside from recording music, The Maine has other projects it undertakes for its fans. The band has released three books, This Is Real Life, Black & White Keepsake Book, and Roads. This Is Real Life is composed of photos taken by the band's friend Dirk Mai as well as journal entries written by the band members during the 2009 Vans Warped Tour. Black & White Keepsake Book consists of photos and journals from the band members. Roads contains behind-the-scenes photos that Dirk Mai has captured as well as pieces of writing from the band members. [28] Later in 2010, lead singer John O'Callaghan collaborated with photographer Dirk Mai in the creation of Exaltation, a book containing 15 poems written by O'Callaghan complemented by nine accompanying photographs by Mai. John O'Callaghan released a book of poetry entitled Sincerely, John The Ghost in 2016 to accompany his solo EP of the same name.