Phoenix–Mesa Gateway Airport ( IATA: AZA, ICAO: KIWA, FAA LID: IWA), formerly Williams Gateway Airport (1994–2008) and Williams Air Force Base (1948–1993), is an international airport in the southeastern area of Mesa, Arizona, 20 miles (17 nmi) southeast of Phoenix, in Maricopa County. [1] The airport, owned and operated by the Phoenix–Mesa Gateway Airport Authority, is a reliever airport for Phoenix Sky Harbor International Airport. It is a base for Allegiant Air. The airport authority is governed by a six-member board: the mayors of the towns of Gilbert and Queen Creek, the mayors of the cities of Mesa, Phoenix and Apache Junction, as well as the tribal governor of the Gila River Indian Community. [2]

The FAA's National Plan of Integrated Airport Systems for 2007–2011 called Phoenix–Mesa Gateway a reliever airport, which is a general aviation airport used to relieve congestion at a large airline airport. [3] Allegiant Air began scheduled service from Mesa in October 2007. [4] Phoenix Mesa Gateway Airport records say the airport had 1,338,216 passenger boardings in calendar year 2017. Most U.S. airports use the same three-letter location identifier for the FAA and IATA, but Phoenix–Mesa Gateway Airport has different codes for each. The aviation community generally uses the FAA code of IWA, while commercial passenger flight organizations use the IATA code of AZA. [5]

The airport was built in 1941 as Higley Field; it was renamed Williams Field on February 24, 1942 in honor of Arizona native 1st Lt. Charles Linton Williams (1898–1927), who while serving with the 19th Pursuit Squadron from Wheeler Field, Oahu was killed when he had to ditch his Boeing PW-9A, 26-353, in the Pacific Ocean about a mile off of Fort DeRussy, Territory of Hawaii. Then in 1948 the field was acquired by the United States military and renamed Williams Air Base in January 1948. It was a flight training field during World War II.

In 1948 Williams became the first jet training base; in 1966 it was the first site of the Undergraduate Pilot Training (UPT) program. [6] The 1991 Base Realignment and Closure Commission recommended closing the base, and it closed in 1993.

As the base was being shut down it was decided that, with the growing traffic at Sky Harbor International Airport in Phoenix, an alternative airport would be needed. The runway was expanded to accommodate airliners and the facility opened in 1994 as Williams Gateway Airport. Bids began for some airlines to begin flights almost immediately.

In 2004 charter airline Ryan International Airlines began MD-82 flights to Bullhead City International Airport in Bullhead City, Arizona, next to Laughlin, Nevada and many resorts. In recent years the airport has again become a center of flight training; several flight schools take advantage of the weather in the Phoenix valley.

On June 16, 2015, after Elite Airways announced non-stop flights from San Diego and Salt Lake City to Phoenix–Mesa, Allegiant threatened to leave the airport. [7] This is primarily due to the incentives the airport is offering to Elite. [8] If Allegiant were to leave, it would consider relocating to the nearby Phoenix Sky Harbor International Airport. [9] [10]

In 1994 the Willams Gateway Airport Authority was established with a three-member board with representation from the three cities immediately adjacent to Williams Field. The original governing board consisted of the mayors of the towns of Gilbert and Queen Creek and the city of Mesa, who continue as members today.

In later years the Gila River Indian Community and the city of Phoenix joined the Williams Gateway Airport Authority board (now Phoenix Mesa Gateway Airport Authority). Gila River Indian Community joined in 1995 and the City of Phoenix joined in 2006. The city of Apache Junction joined in 2013. A six-member airport Board of Directors is composed of elected officials from neighboring cities and a tribal government. Authority communities are: 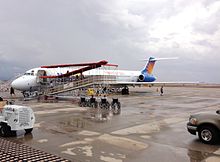 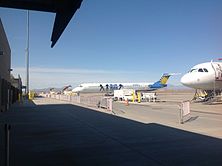 One of the biggest issues at IWA is the increase in passengers since Allegiant Air started operations. IWA did not anticipate this growth within the first year. Due to the increase from 14,588 enplanements in 2007 to 159,481 in 2008, facilities were becoming crowded. To alleviate this problem, extensive renovations and expansions have been completed, adding nearly 70,000 square feet (6,500 m2) of new space within the terminal. This added eight gates since IWA was established in 1994. The Airport broke ground on a final expansion plan in early 2013, to increase gates to ten. However, IWA is running out of real estate on the west side of the airfield, which will bring a halt to expansions until the east terminal facilities are complete.

In response to the expansion issues, PMGAA has begun planning for a new east terminal. The plan titled, Gateway 2030, was developed in June 2012. [17] The Gateway 2030 plan outlines the process, major findings, and recommendations associated with the cost feasible phasing approach to the development of approximately 700 acres (280 ha) of airport property and the supporting City infrastructure critical to ensure its success" (IWA, 2012b). The plan will be implemented in 4 phases. With the completion of phase one, IWA will be able to accommodate 1.5 million enplanements (3 million passengers). Much of phase one will address much needed access and infrastructure for access to the new terminal. The addition will include access roads, parking, taxiways, aprons capable of Group III and IV aircraft, and the new 300,000 square feet (28,000 m2) pier concept terminal. The new terminal will have 14 gates, constructed in such a way to make room for 12 Group III aircraft and two Group IV aircraft.

Phase two has yet to be planned in detail, but will add another pier terminal to the main concourse, adding up to six gates, parking for 10,500 vehicles, and a 1,000 feet (300 m) extension of RW 12L/30R. Phase two will create the ability for IWA to handle 2.2 million enplanements. Phase three for the initial Gateway 2030 plan will add another pier terminal and second level to the main concourse and will create an additional eight gates, a new apron, more parking, and an additional taxiway.

Phase three will focus on privately owned retail, office, and hotel buildings that will be located on airport property. Phase three will allow IWA to accommodate 5 million enplanements.

Phase four will complete the 2030 plan, allowing IWA able to handle 10 million enplanements (20 million passengers) annually with a total of 60 gates and 21,000 vehicle parking spaces. Phase four will likely not be undertaken until 2030 or beyond, making cost estimates nearly impossible.

Due to the changing market, phase two, three, and four are likely to change. Gateway 2030 is estimated to cost more than $1.4 billion.

By road, the airport terminal is served by Sossaman Road. Travelers can access Sossaman Road by exiting at either Hawes and Power Road, which are fed by the Arizona State Route Loop 202, and turning onto Ray Road.

Travelers can park at the hourly or daily parking lots and walk to the terminal. There is also an economy lot, south of the airfield, which is served by a complimentary shuttle to the main terminal. [20]