From Wikipedia, the free encyclopedia
"I-20" redirects here. For other uses, see I-20 (disambiguation).
Interstate in southern US

Interstate 20 (I‑20) is a major east–west Interstate Highway in the Southern United States. I‑20 runs 1,539 miles (2,477 km) beginning near Kent, Texas, at I-10 to Florence, South Carolina, at I-95. [2] Between Texas and South Carolina, I‑20 runs through northern Louisiana, Mississippi, Alabama, and Georgia. The major cities that I-20 connects to include (from west to east) Fort Worth, Texas; Dallas, Texas; Shreveport, Louisiana; Jackson, Mississippi; Birmingham, Alabama; Atlanta, Georgia; Augusta, Georgia; and Columbia, South Carolina.

From its terminus at I‑95, the highway continues about 2 miles (3.2 km) eastward into the city of Florence as Business Spur 20.

I-20 in southern Fort Worth

From the highway's opening in the 1960s through 1977, I-20 originally went through the heart of the Metroplex via the Dallas-Fort Worth Turnpike. This old route is now signed I-30 (Dallas–Fort Worth Turnpike and from US 80/I-30 intersection at Mesquite to downtown Dallas), US 80 (former stretch between I-635 and Terrell) and Texas Spur 557 (bypass around Terrell). In 1977, I-20 was rerouted to go through the southern sections of Fort Worth, Arlington, Grand Prairie, Dallas, and Mesquite. It split off from the old route initially at I-820 in west Fort Worth the later on at its current junction near Aledo in Parker County. It rejoins the old route near Terrell. Part of I-20 in Dallas used to be signed as I-635 and shares the Lyndon B. Johnson Freeway name with the remainder of I-635. Parts on the south side of Fort Worth were originally signed as I-820. [3]

I-20 continues eastward from Terrell, bypassing Tyler, Longview, and Marshall before crossing the Louisiana border near Waskom.

In Louisiana, I-20 roughly parallels U.S. Route 80 through the northern part of the state.

Entering the state from near Waskom, Texas, the highway immediately enters the Shreveport- Bossier City metropolitan area, intersecting I-49 near downtown Shreveport and passing close to Barksdale Air Force Base in Bossier City. 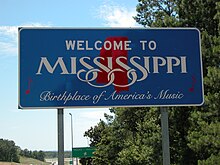 Upon entering Mississippi by crossing the Mississippi River, I-20 immediately enters Vicksburg. Between Edwards and Clinton, the highway mostly follows the original two-lane routing of US 80. In Jackson, I-20 sees a short concurrency with both I-55 and US 49. Also in Jackson is an unusually expansive stack interchange, at the junction of I-20, I-55 North and US 49 South. The interchange replaces a former directional interchange at I-55 North and a cloverleaf at Highway 49. From the Stack, I-20 continues eastward to Meridian, where it begins the nearly 160-mile (260 km) overlap with I-59. 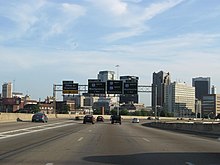 I-20 (co-signed with I-59) approaching I-65 in downtown Birmingham. This is sometimes referred to as Malfunction Junction.

I-20 (along with I-59) crosses the Alabama state line near York, and it stays conjoined as it passes through western Alabama and Tuscaloosa. At Birmingham, the two highways pass through downtown together before splitting at Exit 130 just east of the Birmingham airport. I-20 continues eastward through Oxford/ Anniston, Alabama, and the Talladega National Forest, passing by the Talladega Superspeedway in the process, which is visible from the highway.

Also in Birmingham, the intersection of I-20 / I-59 and I-65 was known as a Malfunction Junction because of the interchange's somewhat-confusing design, and the number of traffic accidents that occurred there. This section of the Interstate and its interchanges have since been reconfigured. [4] [5] 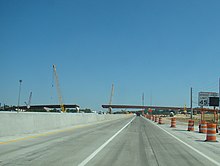 I-20 enters Georgia near Tallapoosa and after passing through western Georgia, it enters the Atlanta metropolitan area. On clear days, eastbound motorists get their first view of downtown Atlanta as they come over the top of the Six Flags Hill. The Six Flags Over Georgia amusement park is easily visible off exit 46 eastbound. The highway then passes through the center of Atlanta, meeting with I-75 and I-85, which share a common expressway (the " Downtown Connector"). It continues through Metropolitan Atlanta eastward and through the eastern half of Georgia until it exits the state, crossing the Savannah River at Augusta.

Throughout the state, I-20 is conjoined with unsigned State Route 402 (SR 402). Also, I-20 from the Alabama state line to I-285 in Atlanta is named the "Tom Murphy Freeway", but it is called the "Ralph David Abernathy Freeway" within I-285. The Interstate Highway is also named the Purple Heart Highway from I-285 in DeKalb County to US 441 in Madison, Georgia, and it is called the Carl Sanders Highway from US 441 to the South Carolina state line. 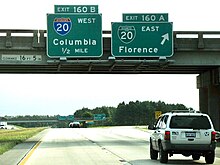 Approaching the eastern terminus of I-20 on I-95, Florence, SC

Upon leaving Augusta, I-20 crosses the Savannah River and enters the Palmetto State and heads northeastward, bypassing Aiken and Lexington before reaching the state capital of Columbia, which can be reached most directly by taking I-26 east at Exit 64 ("Malfunction Junction"), then, almost immediately, I-126 /  US 76.

At Columbia, I-20 bypasses the city to the north and again turns northeastward, bypassing Fort Jackson and Camden. After crossing the Wateree River, it turns due east, passes by tiny Bishopville, before reaching the Florence area. It is near Florence where I-20 sees its eastern terminus at Interstate 95. However, for about two miles (3 km), the highway continues into Florence as Business Spur 20.

I-20 in the Palmetto State is known as either the J. Strom Thurmond Freeway or John C. West Freeway. The first section to be completed was the bridge over the Savannah River in 1965; the last, the section between US 401 and I-95 (including the business spur), opened in August 1975.

I-20 was built in 1957 connecting Texas to the east coast running through Shreveport La, Ruston La, and Monroe La making it their first interstate.[ citation needed]

I-20's path in Atlanta was designed in the late 1950s, during the era of segregation, to separate the city's white and African-American populations. [6]

In 2003, the North Carolina Department of Transportation proposed extending I-20 eastward from Florence to Wilmington at the behest of North Carolina Governor Mike Easley and his 'Strategic Transportation Plan' for the southeast portion of the state. [8] [9] The proposed route would follow US 76 east from Florence to Whiteville, North Carolina, then parallel US 74 / US 76 into Wilmington. [10] Part of this route is already designated the future eastern extension of I-74. As part of the 2005 SAFETEA-LU transportation legislation, North Carolina received $5 million for a feasibility study for this extension. [8] While this extension has considerable support among towns in southeastern North Carolina, the South Carolina DOT has stated that they have no interest in upgrading their portion of US 76 to an interstate. Instead, South Carolina is concentrating their efforts on plans to build I-73 that will terminate near Myrtle Beach. This proposed extension has not been approved by the Federal Highway Administration or the AASHTO, so any construction remains far in the future, but NCDOT maintains the routing in its Strategic Highway Corridors maps. [11]

I-10 at Scroggins Draw

US 84 east of Roscoe. The highways travel concurrently to the Tye– Abilene city line.

US 281 south-southeast of Brazos

I-30 northeast of Aledo

I-45 on the Dallas– Hutchins city line

US 175 on the Dallas– Balch Springs city line

US 271 south-southeast of Winona

US 259 northeast of Kilgore. The highways travel concurrently to Longview.

US 80 west-southwest of Jonesville. The highways travel concurrently to west of Waskom.
Louisiana

US 71 in Shreveport. The highways travel concurrently to Bossier City.

US 371 in Dixie Inn. The highways travel concurrently to Minden.

US 80 southeast of Minden

US 80 east-northeast of Calhoun

US 80 in Delta. The highways travel concurrently to Clinton, Mississippi.
Mississippi

US 61 in Vicksburg. The highways travel concurrently through Vicksburg.

US 80 east-southeast of Lake

US 80 west-southwest of Meridian. The highways travel concurrently to Meridian.

I-59 in Meridian. The highways travel concurrently to Birmingham.

US 11 in Meridian. The highways travel concurrently through Meridian.

US 11 / US 80 west-northwest of Kewanee
Alabama

US 11 south of Lake View. The highways travel concurrently to Bessemer.

I-459 southwest of McCalla

US 78 northwest of Cooks Springs. The highways travel concurrently to Pell City.

US 431 east of Oxford
Georgia

I-285 on the Panthersville– Candler-McAfee CDP line

US 278 southeast of Lithonia. The highways travel concurrently to Covington.

US 78 north of Thomson

I-520 in Augusta
South Carolina

US 25 in North Augusta

US 1 north-northeast of Aiken

US 178 southeast of Batesburg-Leesville

US 1 east of Lexington

US 321 north of Columbia

I-77 on the Dentsville– Woodfield CDP line

US 15 southwest of Bishopville

US 401 northeast of Lamar

Two I-420s were planned, but never completed or built. One was to be a bypass around Monroe, Louisiana, but was never built. The other I-420 was planned as a bypass to the south of Downtown Atlanta. Due to anti-freeway sentiments, this I-420 was never completed, and the already-built portion has been signed as SR 154/SR 166, named Langford Parkway (formerly the Lakewood Freeway).