From Wikipedia, the free encyclopedia
For the World War II use of the airport, see Columbia Army Air Base.

Columbia Metropolitan Airport ( IATA: CAE, ICAO: KCAE, FAA LID: CAE) is the main commercial airport for Columbia and the Midlands region of South Carolina. The airport is five miles (8 km) southwest of Columbia, in Lexington County, [1] surrounded by the city of Cayce and the towns of Springdale, Pine Ridge, and South Congaree. The airport is a regional cargo hub for UPS Airlines.

The airport was built in 1940 as Lexington County Airport. In 1940 the United States Army Air Corps indicated a need for the airfield as part of the buildup of its forces after World War II began in Europe. The earliest recorded Air Corps use of the airport was when the 105th Observation Squadron began flying Douglas O-38 and North American O-47 light observation aircraft on 24 September[ year needed].

In 1941 the airport came under formal military control and an immediate program began to turn the civil airport into a military airfield. On 8 December 1941, as the Columbia Army Air Base, Columbia Army Airfield's mission was a training base for B-25 Mitchell crews.

One of the earliest units to train at Columbia AAB was the 17th Bombardment Group, which arrived on 9 February 1942. When the group arrived in Columbia its combat crews were offered the opportunity to volunteer for an "extremely hazardous" but unspecified mission which ultimately turned out to be the famous Doolittle Raid on Japan. Contrary to popular belief, the volunteers who made up the crews of the Doolittle Raid did not train for the Raid itself at Columbia.

Training at Columbia Army Air Base was phased down during the summer of 1945. Several units arrived at the base from overseas to inactivate during September and October. It was inactivated by the U.S. Army Air Forces on 30 November and returned to civil authorities, which converted it back to an airport. The 350th Bombardment Squadron was assigned to Columbia Metropolitan Airport on 16 July 1947 as part of the Air Force Reserve, but it was never equipped or manned; it was inactivated on 27 June 1949. 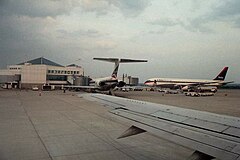 Eastern Airlines flew to Charlotte, Washington, and New York; it first scheduled jets to CAE in 1965. Piedmont Airlines flew from Augusta, Florence, and Charlotte in 1962. Southern Airways flew to Charleston and Greenville/Spartanburg. In January 1978 Eastern started flights to Atlanta after a route swap with Piedmont Airlines. Southern Airways left in December 1978, six months before their merger with North Central Airlines to form Republic Airlines. Atlantis Airlines started service in 1979 for a brief time using Twin Otter aircraft. Piedmont Airlines introduced nonstop service to Miami in January 1980, but dropped Columbia in June 1980 leaving only Delta and Eastern for a time.

In November 1982 Piedmont Airlines returned to Columbia with flights to Charlotte and later Newark. American Airlines would start service in 1985 to Raleigh and United Airlines would fly to Charlotte and Chicago–O'Hare. PeopleExpress and Continental Airlines. Freedom Airlines operated Convairs to Columbia in 1983. United Express (operated by Atlantic Coast Airlines) entered the market May 24, 1999 with service to Washington–Dulles and added Chicago–O'Hare on July 1, 2000. Northwest Airlines (operated by Pinnacle Airlines) came to Columbia on October 6, 2003, offering service to Detroit. On October 30, 2005, American Eagle returned after a nine-year absence with service to Dallas/Fort Worth after Delta closed their DFW hub earlier that year. In October 2010 US Airways Express operated by Air Wisconsin began non-stops to New York–La Guardia, but wound up discontinuing it as a result of a New York–La Guardia slot swap with Delta, which now has two daily flights to the airport.

Since 2000 the airport has tried to recruit low-cost carriers, but has been unable to maintain those services. Allegiant Air tried service to Orlando/Sanford, St. Petersburg/Clearwater and Fort Lauderdale in Florida, yet these services did not last. Independence Air served Columbia briefly in 2004 and 2005 with service to Washington–Dulles before ceasing its operations in January 2006. In May 2008, Spirit Airlines began service to Fort Lauderdale but terminated the route in March 2009. In 2011 Vision Airlines launched service to Destin, Florida, ending the route after a month.

In 2015 United Airlines CEO Jeff Smisek was forced to step down after it was revealed that he had continued to run an unprofitable route to the airport from Newark Liberty International Airport for former Port Authority of New York and New Jersey chairman David Samson. [2]

On June 7, 2018 American Airlines restored mainline service to Columbia with two daily nonstop flights to Dallas/Fort Worth. [3] The airline also announced it will start flights to/from Miami by the end of 2019.

The airport is a hub for UPS Airlines and was a hub for Air South, a former low-cost carrier.

The terminal opened May 30, 1965, and was renovated in 1997. The renovation was designed by Heyward, Woodrum, Fant & Associates, Ltd. [4] It replaces a terminal built in the early 1950s which was a replacement of a terminal built several years earlier in the early 1950s. [5] Since the late 1980s, capital improvements have been undertaken, including a renovated and expanded terminal, a new parking garage (completed in 2003), the lengthening of the runways, and better interstate access. The terminal has several services, including gift shops, the Everett Adams Memorial Chapel, restaurants and bars inside the terminal. Free wireless internet service is provided throughout the airport as well as small number of recharge stations with access to outlets.

In August 1996, the UPS Airlines-owned cargo airline opened an $80 million southeastern regional hub at the airport, one of six regional hubs throughout the United States. The hub offers next-day, second-day and third-day air service. The buildings encompass 352,000 square feet (32,700 m2) and the 44-acre (180,000 m2) ramp is large enough to hold 22 DC-8 aircraft. The hub can process 42,000 packages an hour. Other major air cargo companies serving the airport include ABX Air and FedEx Express.