Laughlin /ˈlɔːf.lɪn/ is an unincorporated resort town and census-designated place in Clark County, Nevada, United States. [2] It is located on the Colorado River, directly across from the much larger Bullhead City, Arizona. Laughlin lies 90 miles (140 km) south of Las Vegas, in the far southern tip of Nevada, and is known for its gaming and water recreation. As of the 2010 census, the population was 7,323. [3] The nearby communities of Bullhead City, Arizona; Needles, California; Fort Mohave, Arizona; and Mohave Valley, Arizona, bring the area's total population to about 100,000. [4] [5] Laughlin is also 286 miles (460 km) northeast of Los Angeles. [6]

Laughlin was named for Don Laughlin, an Owatonna, Minnesota native who purchased the southern tip of Nevada in 1964 (informally called South Pointe). At the time, Don Laughlin operated the 101 Club in Las Vegas. He opened what would become the Riverside Resort, and later wanted to call the community Riverside or Casino, but the post office opted for Laughlin instead. [7] 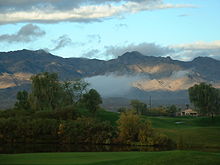 Avi Resort and Casino Golf Course in Laughlin in 2007

The southernmost tip of Nevada, along the Colorado River, where Nevada, California, and Arizona meet, has become a major national tourist destination and gambling resort within the last few decades. The townsite of Laughlin was established in the 1940s as South Pointe because of the proximity to the southern tip of the state of Nevada. The early town consisted of a motel and bar that catered to gold and silver miners, construction workers building Davis Dam, and fishing enthusiasts. In the 1950s, construction workers left, and the town all but disappeared.

In 1964, Don Laughlin, owner of the 101 Club in Las Vegas, flew over the site and saw its tourism potential. He offered to buy the land, and within a few years, the small motel and casino, consisting of only 12 slots and two live tables, was bustling. In 1972, 48 rooms were added, followed by several additions. In 1983, the Riverside Resort built the first 14-floor high-rise. [8] A second casino, the Bobcat Club, opened in 1967, where the Golden Nugget Laughlin currently operates. In 1968, a third casino, the Monte Carlo, opened its doors. Across the river, Bullhead City, Arizona, sat in the glow of the casino light. Shuttle boats transported customers from the Arizona side of the river to Laughlin's resorts and back.

The 1980s saw the construction of several more hotels and casinos. The Colorado Hotel (now the Pioneer), The Regency, Sam's Town Gold River (now the Laughlin River Lodge), and The Edgewater opened in the early 1980s. Other investors saw the growth as an opportunity to get in on the action. A second boom resulted in the construction of The Colorado Belle, Harrah's Del Rio, and The Ramada Express (now The Tropicana Express). In 1987, Don Laughlin funded and built the Laughlin Bridge at a cost of $3.5 million. He donated the bridge to the states of Nevada and Arizona. The bridge carries 30,000 vehicles daily. In 1988, a megaresort called the Emerald Resort, that would have been the biggest in southern Nevada, was announced but its first tower was left unfinished due to the junk bond market's collapse in 1990. Only the project's golf course opened and it operated from 1991 to 2005. [9] The Flamingo Hilton, now known as The Aquarius, was built in 1990.

Today there are nine hotel/casinos and one motel in Laughlin providing over 10,000 rooms, 154,000 square feet (14,300 m2) of meeting space, 60 restaurants, two museums, a 34-lane bowling center, a 10-lane bowling center at the Laughlin River Lodge, and a variety of boutiques, spas, and salons. More than 14,000 casino workers now cross the Colorado by shuttle boat or the Laughlin Bridge each day. Laughlin currently attracts less than 2 million visitors annually who visit to gamble, enjoy water sports on the Colorado River, or attend many high-profile special events hosted by the community. [10]

In 2012, some residents disapproving of Clark County politics made a push to incorporate Laughlin as a city in order stave off additional loss business opportunities, as well as gain local control. The proposal did not include Laughlin Casinos. [12]

When the proposal came to a vote in a referendum, the vote was a resounding 57 percent opposed to 43 percent in favor. [13]

In 2019, Senate Bill 213 failed to pass the Nevada legislature's Committee of Government Affairs, that would have made Laughlin a city without the consent of the voters. [14] This would have given Laughlin representation on 9 of the 15 entities now providing services to the community [15]

According to the United States Census Bureau, the census-designated place (CDP) of Laughlin (which may not coincide exactly with the town boundaries) has a total area of 89.3 square miles (231 km2), of which 88.0 square miles (228 km2) is land and 1.4 square miles (3.6 km2) is water.

Laughlin is one of the lowest-lying communities in Nevada, situated just 558 feet (170 m) above sea level.

Laughlin has a hot desert climate ( Köppen climate classification BWh), with under six inches of precipitation per year. Summers are extremely hot with days frequently exceeding 110 °F (43 °C) in July and August while over-night lows tend to stay between 76–86 °F (24–30 °C). The winters are mild with days typically seeing temperatures between 65–75 °F (18–24 °C) and corresponding over-night lows between 43–52 °F (6–11 °C). It is one of the United States' hottest cities during the summer. Heat waves involving temperatures going over 120 °F (49 °C) are not unusual.

Laughlin is an unincorporated town which has the same boundaries as the Township of Laughlin. The town is the subdivision by which it is governed by the Clark County Commission, which receives advice from the elected Laughlin Town Advisory Board (LTAB). Members of the LTAB are elected for terms of two years. Prior to November 2016, the members of the LTAB were appointed.

There is a Laughlin Town Manager who is appointed by and reports to the Clark County Department of Administrative Services which, in turn, reports to the County Manager. The current position (February 2021) of Town Manager is vacant and is not expected to be refilled until sometime later in 2021; the current (February 2021) Town Board Secretary is Tammy Harris, who also reports to Administrative Services. Laughlin falls under the jurisdiction of the Las Vegas Metropolitan Police Department (LVMPD), and fire protection is provided by the Clark County Fire Department. The current (May 2021) commander of the Laughlin police Sub-Station is Lt. Grant Rogers. Laughlin has one of the lowest crime rates in the country, with a crime rate index of 2 (100 being the national average).

The Township of Laughlin, which is a judicial district for the purposes of elections, consists of a Justice Court, presided over by a Justice of the Peace (elected for a six-year term as a non-partisan official) and a Constable (elected for a four-year term also as a non-partisan official). Currently (February 2021) the Justice of the Peace is the Honorable Timothy Atkins and the Constable is Jordan Ross. Prior to 2020, the office of constable was partisan but this was changed to non-partisan by SB 462 (80th Session). [19]

The Community Resources Center is located in the Clark County Regional Government Center complex in Laughlin. Several social services agencies provide assistance to the public from this building. The River Fund, Inc., is a local non-profit agency providing direct emergency and crisis services for individuals and families. East Valley Family Services is a non-profit organization that provides support for Laughlin through a variety of programs targeted to families, children, and seniors, as well as providing advice regarding other public assistance programs. The State of Nevada Division of Welfare and Supportive Services provides timely and temporary services for families, the disabled, and the elderly. The local office of the Southern Nevada Health District [20] and the constable's office is also located in this building.

Tourism levels have been down in Laughlin overall the last several years, but the area holds several interesting events. Beginning in 2001, the Tropicana Express Hotel and Casino has been the host for the Talent Quest National Finals. The contest is held in the third week of September, where qualifying singers compete for the top spot in Male and Female Pop/Rock/R&B and Country/Western.

The Laughlin River Run started in 1983 and has thousands of avid motorcyclists attending annually each spring, usually in late April.

The Clark County School District serves Laughlin. Children are transported by bus to local schools all located within the town limits. They are William G. Bennett Elementary School (K-5), Laughlin Junior High School (6-8) and Laughlin High School (9-12). [21] [22] [23] The Junior High School and the High School share the same campus, which has numerous modern facilities including a well-equipped auditorium and a gymnasium.

Laughlin has a public library, a branch of the Las Vegas–Clark County Library District. The Laughlin Library has full access to the district's extensive collection of books, periodicals, and videos. It includes computers with printers, and internet access for public use, wireless internet access, a fully stocked and staffed children's library, study rooms, a community room, a small conference room, and a small but excellent art gallery. It is the largest rural library in Clark County with 15,562 square feet and over 70,000 volumes. [24]

Laughlin is the third most visited casino and resort destination in the state after Las Vegas and Reno and is one of the top five destinations for American RV enthusiasts. [25]

A September 2013, article in the Las Vegas Review-Journal:

Once a boomtown, Laughlin has seen nothing but declines for a dozen years, almost exactly coinciding with the loss of regular airline flights after Sept. 11, 2001. The 2.1 million visitors recorded last year by the Las Vegas Convention and Visitors Authority is less than half the 1997 peak. Through July, the count has dropped another 2.2 percent compared to 2012. [26]

Despite the turn-down in visitors to Laughlin, the casino corridor offers a wide variety of over two dozen food and beverage establishments for both locals and visitors to enjoy. [27]

Located in the North Reach of Laughlin is the Colorado River Greenway Heritage Trail park. It include nine miles of trails for bicyclists, pedestrians, and equestrians; restrooms; picnic sites; shade shelters; fishing piers; an extensive playground with water sprays in the summer; and a pedestrian bridge over State Highway 163 which provides access to the Colorado River.

In the center of Upper Laughlin, next to the Spirit Mountain Activity Center, and one block from the town library, is Mountain View Park. It includes two softball fields, a playground, exercise trail, tennis courts, basketball courts, volleyball court, shaded picnic tables, a dog run, and a skateboard park.

At the south end of Upper Laughlin is the town pool. It is open during the summer months, and it includes full locker room facilities, shaded tables, and a large water park style slide.

At the southernmost reaches of the township is Big Bend of the Colorado State Recreation Area. This 2,100-acre (850 ha) public recreation area on the west bank of the Colorado River offers boating, fishing, camping, picnicking, and hiking on four miles of developed trails.

There are no freeways that pass through Laughlin. Intersections that have traffic lights number about twelve in the town, predominantly in the Casino District. Nevada State Route 163 connects Laughlin with southern Nevada and with Arizona State Route 95 in Bullhead City.

The Southern Nevada Transit Coalition provides bus service on two routes in Laughlin, one of which operates 24 hours a day, 365 days a year. It also operates express buses to Las Vegas. Laughlin/Bullhead International Airport (IFP) lies across the river in Bullhead City, Arizona. The airport provides casino-sponsored chartered flights, and is also utilized by some private aircraft. Private shuttle companies connect Laughlin with McCarran International Airport in Las Vegas. [28] [29] A shuttle also connects Laughlin with the Amtrak station in Kingman, Arizona. [29] Laughlin is served by the bus company TUFESA with service to Phoenix and Las Vegas. [30]