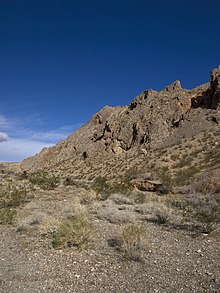 Rocks in the southern part of the reservation, immediately west of Valley of Fire State Park

The reservation is crossed from northeast to southwest by the I-15 highway. In the southeast, it is adjacent to Valley of Fire State Park. In particular, Exit 75 of the highway and the local road leading to the west park entrance (formerly Nevada 169, decommissioned in 2001), down to the entrance, belong to the reservation. [2]