From Wikipedia, the free encyclopedia
City in California in the United States

Needles ( Mojave: ʼAha Kuloh) is a city in eastern San Bernardino County, California, United States. It lies on the western banks of the Colorado River in the Mohave Valley subregion of the Mojave Desert, near the borders of Arizona and Nevada and roughly 110 miles (180 km) from the Las Vegas Strip. It is the easternmost city of the Riverside-San Bernardino-Ontario metropolitan area. Needles is geographically isolated from other cities in the county. Barstow, the nearest city within the county, is separated from Needles by over 140 miles of desert and 2 mountain ranges. [5] The city is accessible via Interstate 40 and U.S. Route 95. The population was 4,844 at the 2010 census, up from 4,830 at the 2000 census.

Needles was named after "The Needles", a group of pinnacles in the Mohave Mountains on the Arizona side of the river to the south of the city. The large Mohave Native American community shares the nearby Fort Mojave Indian Reservation and the town. Needles is a gateway to the Mojave National Preserve.

Needles was founded in May 1883 during the construction of the Atchison, Topeka and Santa Fe Railway, [6] which originally crossed the Colorado River at Eastbridge, Arizona three miles southeast of modern Needles. Its name was taken from the Needles, a group of pointed mountain peaks at the south end of the valley, visible only by boat from the Colorado River. However, the crossing was a poor site for a bridge, lacking firm banks and a solid bottom. A bridge was actually built, but it was of poor quality. Not only was it a "flimsy looking structure", but it was also an obstacle to navigation on the river. The flooding of the Colorado River destroyed the bridge three times – in 1884, 1886 and 1888. The railway finally built Red Rock Bridge, a high cantilever bridge, at a narrower point with solid rock footings ten miles downstream near today's Topock. The bridge was completed in May 1890, and the old bridge was dismantled. [7]:82

At first simply a tent town for railroad construction crews, the railway would eventually build a hotel, car sheds, shops and a roundhouse. Within only a month, Needles would have a Chinese laundry, a newsstand, a restaurant, several general stores, and about nine or ten saloons. Needles quickly became the largest port on the river above Yuma, Arizona. [7]:82 The railway and the Fred Harvey Company built the elegant Neoclassical and Beaux-Arts style El Garces Hotel and Santa Fe Station in 1908, which was considered the "crown jewel" of the entire Fred Harvey chain. [6] The landmark building is on the National Register of Historic Places and is being restored.

Needles was a major stop on the historic U.S. Route 66 highway from the 1920s through the 1960s. [8] For immigrants from the Midwest Dust Bowl in the 1930s, it was the first town that marked their arrival in California. The city is lined with motels and other shops from that era. The "Carty's Camp", which appears briefly in The Grapes of Wrath as the Joad family enters California from Arizona, [6] is now a ghost tourist court, its remains located behind the 1940s-era 66 Motel.

In 1949, the United States Bureau of Reclamation began an extensive project to dredge a new channel for the Colorado River that would straighten out a river bend that was causing serious silt problems since the Hoover Dam was completed. [9]

Needles is a tourism and recreation center. [6] The city is the eastern gateway to the Mojave National Preserve, a scenic desert area.

Needles, like Death Valley to the northwest, is known for extreme heat during the summer. The Needles weather station is frequently reported by the United States government's National Oceanic and Atmospheric Administration (NOAA) as the site of the highest daily temperature recorded in the U.S. during the desert summers. Needles occasionally sets national or world daily temperature records, along with other related records associated with extreme desert heat. For instance, on July 22, 2006, Needles experienced a record high low temperature of 100 °F (38 °C) at 6:00 am with a high temperature exceeding 120 °F (49 °C), [11] making it one of the few locations on Earth that have recorded a triple-digit overnight low temperature. Also, on August 13, 2012, Needles experienced a thunderstorm that deposited rain at a temperature of 115 °F (46 °C) starting at 3:56 pm, setting a new record for the hottest rain in world history. The air temperature was 118 °F (48 °C), tying Needles' record high for the date. Since the humidity was only 11%, the rain evaporated so that "only a trace of precipitation was recorded in the rain gauge". Weather records researcher Maximiliano Herrera reported that this was the lowest humidity at which rain has occurred on Earth in recorded history. [12] Later, on May 4, 2014, Needles reached a temperature of 102 °F (39 °C) with a dewpoint of −38 °F (−39 °C), for a relative humidity of 0.33%, the lowest value ever recorded on Earth. [13]

There were 1,940 households, out of which 31.2% had children under the age of 18 living with them, 42.5% were married couples living together, 16.8% had a female householder with no husband present, and 34.6% were non-families. 29.0% of all households were made up of individuals, and 13.1% had someone living alone who was 65 years of age or older. The average household size was 2.5 and the average family size was 3.0.

Major employment in the city is supported by the BNSF Railway (formerly the Santa Fe Railroad). The depot has been a terminal (crew change point) for the railway since the late 19th century. The railroad company has been the city's main employment source for over a century. 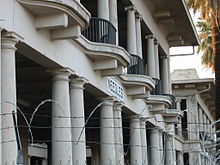 The El Garces Hotel, a Harvey House, undergoing restoration in 2007

The City of Needles was incorporated on October 30, 1913. [2] It is a charter city, led by an elected mayor and a city council with six elected members. Mayors serve two-year terms of office, and councilmembers serve four-year terms. The council designates a vice mayor from among its members. [25] The city council also appoints a city manager who is responsible for the operation of city departments. As of January 2020, the current city manager is Rick Daniels. [26]

In the United States House of Representatives, Needles is in California's 8th congressional district, represented by Republican Paul Cook. [28]

The March 9, 2009 voter registration tally for the city is as follows:

In 2008, claiming the county had been unwilling to help keep the city's troubled hospital open as a full-service medical facility, the city considered seceding from California and becoming part of neighboring Nevada, only a few miles away. The options of attaching itself to the state of Arizona or even forming a new county were also considered. [30] Proposals to change states would require approval from the United States Congress and both state legislatures.

Interstate 40, known locally as the Needles Freeway, is the major highway through Needles, connecting Barstow to the west and Arizona to the east. U.S. Route 95 also enters the city from the east on former Route 66 as a concurrency with the I-40 freeway, then splits with the Interstate west of the city, and heads north to Nevada. The Colorado River Bridge connects Needles directly with Mohave County, Arizona, and Arizona State Route 95.

Amtrak, the national passenger rail system, provides daily service to Needles station, operating its Southwest Chief between Chicago and Los Angeles. It arrives between midnight and 2 am.

Local Transit service to the Needles area is provided by Needles Area Transit. [31]

Since December 1989 the City of Needles has been patrolled by the San Bernardino County Sheriff's Department under the command of Captain Ross Tarangle from the Needles Patrol Station. [33]

Colorado Medical Center was once a full service hospital but at present it's more functioning as an urgent care. [34]

Needles' elementary schools and Needles High School are part of the Needles Unified School District. The school district is one of the largest in the United States in terms of area with almost 6,000 square miles (16,000 km2) in its boundaries. The district runs from Amboy to Needles, and south to Parker Dam. It has 1,158 students enrolled. [35] The local Needles schools include Katie Hohstadt Elementary School, formerly called 'D' Street School (new home of Needles Head Start, and no longer a regular public school), Vista Colorado Elementary School (grades K–5), Needles Middle School (grades 6–8), Needles High School (grades 9–12), and the Educational Training Center (grades 9–12). Needles High School, due to its distance from other California schools, is a member of the Nevada Interscholastic Activities Association, along with four other similarly placed California schools: Truckee, North Tahoe, South Tahoe, and Coleville.

In the 1993 film Suture, the town of Needles is a key element of the plot.

In the 2010 film Legion, Dennis Quaid's character mentions calling his brother in Needles

Well I never been to England, but I kinda like the Beatles. Well, I headed for Las Vegas, only made it out to Needles. Can you feel it? Must be real. It feels so good!

We pulled into a truck stop Somewhere just outside of Needles California, You asked me for ten bucks and I said “What about the last ten bucks I loaned you?”