Pahrump ( /pəˈrʌmp/ pə-RUMP) is an unincorporated town in Nye County, Nevada, United States, [2] about 62 miles west of Las Vegas, Nevada. Pahrump lies near the Nevada- California border and the area had a 2010 population of 36,441.

Pahrump was originally inhabited by the Southern Paiute. It was slowly inhabited by settlers in the late 19th century. They reportedly chose the name for Pahrump after the original Southern Paiute name Pah-Rimpi, or "Water Rock," so named because of the abundant artesian wells in the valley. Because of the artesian wells, the new inhabitants of Pahrump Valley began a number of large ranch-style holdings, mostly over 1,000 acres (400 ha) in size. On the ranches, alfalfa and cotton were grown, and livestock were raised. 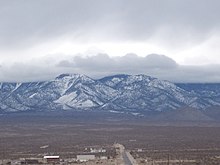 View of the mountains from town

Until the 1960s, Pahrump had no telephone service except a radio transmitter phone in a phone booth next to the small market, and there were no paved roads in or out of the Pahrump Valley. However, as Las Vegas grew, real estate speculation became somewhat more popular in the area. This led to the introduction of telephone service and the construction of a paved highway between Las Vegas and Pahrump during the late 1960s. Later, this road ( NV 160) was extended from Pahrump northward to US 95, near Amargosa Valley. A second paved road ( NV 372) was introduced that went from Pahrump to neighboring Shoshone, California, which provided a link to the Death Valley area, as well as a shorter route to those wishing to travel to Los Angeles or other areas in California. In the fifties and sixties, there was a two-room elementary school and the high school students went to Shoshone. In 1974, Pahrump's first high school, Pahrump Valley High School, was constructed.

Since the late 1970s, Pahrump has had steady growth, increasing from about 2,000 residents in 1980 to 22,000 in 2017. Pahrump is an archetypal example of an exurb. Almost all significant agriculture has ended in the valley, [3] and the surface aquifers have been drained over the years.

A wealthy Las Vegas casino owner, Ted Binion, buried a large treasure of silver in a secret underground vault in Pahrump. In 1998, Binion died under suspicious circumstances, and one of the parties accused of murdering Binion was apprehended while digging up the vault in Pahrump. A book about the Binion murder trial (and Las Vegas poker) is Positively Fifth Street by James McManus.

On November 15, 2006, the Pahrump town board voted for an ordinance declaring English the official language of business, forbidding the display of foreign flags, and denying any benefits to illegal immigrants. A measure in the ordinance requires an American flag to be displayed above any other flag, regardless of what organization, nation, or government it represents. 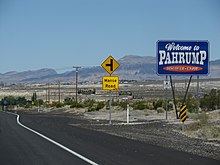 According to the United States Census Bureau, the census-designated place of Pahrump has a total area of 297.9 sq mi (771.5 km2), all of which is land. By area, it is the largest CDP in the contiguous United States, although it ranks only eleventh nationally, since the largest ten are all in Alaska. The area lies in the Mojave Desert.

Night aerial view of Pahrump from the southwest, with the downtown intersection of Nevada routes 160 and 372 at the bright center

Summers in Pahrump are generally hot and dry, with occasional pushes of monsoonal moisture beginning in early July. Being at a similar elevation to Las Vegas, daytime highs in summer average within a few degrees of Las Vegas. Record highs are similar between the two cities as well. A typical day during June through August brings temperatures around 100 °F (38 °C), and occasionally 110 °F (43 °C). Nighttime temperatures, however, are noticeably cooler. This is due to the lack of an urban heat island in Pahrump, allowing for intense radiative cooling after sundown. As a result, summer nights are pleasantly warm, bottoming out in the mid-60s or 70s °F (around 20 °C). Pahrump's location in a valley leads to large diurnal temperature ranges, typically 30 °F (17 °C) but occasionally 40 °F (22 °C). By late August and early September, the sweltering summer heat noticeably tempers down. September is the gateway to fall, which brings very pleasant weather. October highs are generally 80 °F (27 °C) and nighttime temperatures in the 50s °F (low teens °C). Due to its elevation, Pahrump is protected from the searing summer temperatures experienced in the nearby Death Valley.

Like other locations in the Mojave desert, winters are typically mild, with occasional pushes of cold air from the north. Daytime highs average from the mid-50s and 60s °F (10s °C), but low temperatures hover around freezing for most nights between December to February. Spring brings pleasantly warm temperatures and cool evenings. Like other locations in the Mojave desert, this is the windiest time of year. Snowfall is rare in Pahrump, but there is generally at least one snow day per year.

Like many communities in Nevada, Pahrump has an unincorporated town status, with a limited government that manages land-use planning, recreation, and fire, while leaving most services to Nye County. In May 2009, the town board set up an advisory board to study incorporating Pahrump as a town or city.[ citation needed] but the town opposition was too great and any plans to incorporate Pahrump were dropped. In 2012 the citizens of Pahrump voted to disband the Town Board form of government due to the board's continued pushes for incorporation in favor of becoming an advisory board under the County Commissioners. It was finalized in 2014 when the incumbent elected members' terms expired. [6] Per the Town of Pahrump website, the elected Pahrump Town Board was disbanded as of January 5, 2015. [7]

Public education in Pahrump is administered by the Nye County School District.

Pahrump has a public library. [8]

Notable businesses in the area include Front Sight Firearms Training Institute and the Spring Mountain Motor Sports Ranch. In addition, there are wineries, including Sander's Family Winery and Pahrump Valley Winery.[ citation needed]

Two legal brothels, Sheri's Ranch and Chicken Ranch, are located in Pahrump. Due to their proximity to Las Vegas, they tend to be more expensive than other legal brothels in Nevada. Sheri's Ranch [9] is the larger of the two, and may have upwards of 20 prostitutes on its premises at any given time.

Pahrump Valley Transportation is the only public transportation in Pahrump. However there is also VetRANS, a transportation service for veterans. Both services run by appointment, and offer transport to certain destinations in Las Vegas. Residents, and those visiting Pahrump, utilize McCarran International Airport in the Las Vegas area, approximately 60 miles east of Pahrump. A private airport, Calvada Meadows Airport, also serves Pahrump, however, aircraft must request permission before landing at this small airport. Enterprise Rent-A-Car operates a local branch for vehicle rental needs. Pahrump has taxi service operating 24 hours a day.

Pahrump was the hometown of author and radio personality Art Bell. He was known for founding Coast to Coast AM, an overnight radio talk show mainly about paranormal subjects, conspiracies and other oddities, a program that he broadcast from his home studio. At one time, Bell owned KNYE, the local radio station located in Pahrump. After the death of his wife Ramona, Bell remarried and relocated to the Philippines. On the December 28, 2006, broadcast of Coast to Coast AM, Bell announced he had returned to Pahrump, but he later returned to the Philippines, where he resided until 2011, when he again returned to Pahrump. Bell hosted Art Bell's Dark Matter, also dealing with paranormal subject matter, which aired on SiriusXM, from his home in Pahrump.[ citation needed] In July 2015, Art Bell returned to the airwaves with a new show, Midnight in the Desert, which aired weeknights in a three-hour time slot. The show covers much of the same material as Coast to Coast AM. Bell retired from the show in December 2015. Bell died on April 13, 2018, in Pahrump.

Michael Jackson purchased a home in the area in 2008, where he briefly had a home studio and home schooled his three children. [10]

The popular post-hardcore band Escape the Fate was founded in and originally from Pahrump, [15] [16] before the band relocated to Las Vegas.

Although brothel owner Dennis Hof died in nearby Crystal, he referred to himself in political ads as "The Trump of Pahrump", a sobriquet he credited to Donald Trump advisor Roger Stone (an early supporter of Hof). [18]

Libertarian writer and filmmaker J. Neil Schulman, author of Alongside Night (1978) and writer/producer/director of the indie film Alongside Night [19] Schulman was also the first to produce a film that featured Pahrump in the script of Lady Magdalene's, a film starring Nichelle Nichols as the owner of the brothel "Lady Magdalene's".