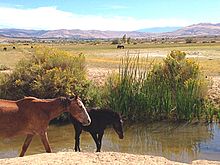 Mustangs in the Truckee Meadows. Picture was taken just prior to this portion of the valley being developed with homes. 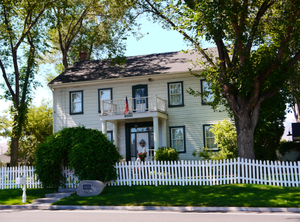 Damonte Ranch House built 150 years ago which still stands today. The house is listed on the National Register of Historic Places,

1857 pioneer rancher Peleg Brown, a Rhode Island native arrived in the Truckee Meadows with his brother, Joshua. The two brothers introduced alfalfa to the area and built their home ( Damonte Ranch House) 150 years ago which still stands today. The house is listed on the National Register of Historic Places, which caused the Nevada Department of Transportation to divert the construction of Interstate 580 and U.S. Route 395 freeway around the property to preserve the home and ranch. [5]

The Truckee Meadows is a valley in western Nevada located within the western Great Basin. Named for the Truckee River, which flows through the valley from west to east, this area contains archaeological evidence of aboriginal human occupation. [1]

The Truckee Formation, is the oldest deposit of the valley and yields very little water to wells. Most of the discharge of water is by evapotranspiration and by seepage to ditches and streams. Some water in the area is unsuitable for many uses because of its poor chemical quality. Water in the Steamboat Springs area is hot and has high concentrations of chloride and dissolved solids. Both water draining areas of bleached rock and ground water from areas of leached rock have high concentrations of sulfate and dissolved solids. [2]