From Wikipedia, the free encyclopedia
This article is about the census-designated place in Douglas County, Nevada. For the unincorporated community of Clark County, Nevada formerly known as "State Line", see Primm, Nevada.
CDP in Nevada, United States

Stateline is a census-designated place (CDP) on the southeastern shore of Lake Tahoe in Douglas County, Nevada, United States. It lies next to the California state line and City of South Lake Tahoe. The population was 842 at the 2010 census. The population swells considerably during the busy winter and summer seasons, due to the high number of hotel rooms and rental accommodations available. 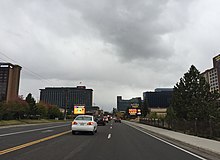 Many of the hotels in the neighboring city of South Lake Tahoe, California, organize buses to take residents to the casinos in Stateline. Stateline and South Lake Tahoe are effectively a single settlement, with the state line intersecting with U.S. Route 50 immediately after the Harrah's and Harvey's casinos. As commercial gambling establishments are illegal in California unless built on Indian reservations, the casinos are extremely popular with California residents due to their strategic location right on the state line.

Another well-known feature of Stateline is Kingsbury Grade, which runs up and over a mountain pass, rising from Lake Tahoe and dropping down to the Carson Valley on the other side. Most of Stateline's residential and seasonal accommodation, amenities and services are located on or near Kingsbury Grade. The route can be difficult in the winter months and snow chains are essential during this time. Larger vehicles are required to allow traffic to pass when five or more vehicles are queued behind them.

Most of the town and surrounding land has been maintained by the heirs of the historic Friday's Station of the Pony Express; it is leased to the casinos. The duplex naming of the community originated in part because of an interstate border dispute, resulting from differences in several boundary surveys. [1] [2] [3] The erroneous 1872 Von Schmidt survey of the California-Nevada boundary found the stateline crossing U.S. 50 on the west edge of present-day Applebee's, and the east edge of the Ashley Marcus Gallery in Tahoe Crescent V Shopping Center in California. [3] [2] The community of Stateline, California, contended to be in Nevada, emerged just east to benefit from Nevada law—including tax-free status and later gambling which was legalized in 1931. However, an 1893 United States Coast and Geodetic Survey (C.G.S.) placed the border several thousand feet east of 1872 Von Schmidt line, creating a discrepancy which left the community in legal jeopardy. The Stateline Country Club operated in the 1930s. By the mid-1950s to mid-1960s, gambling development moved east across the 1893 C.G.S. line to a new adjacent community of Edgewood, NV. [4] [5] After a 1980 US Supreme Court ruling, [1] the east-migrated gambling community of Egewood formally regained its name Stateline, this time in NV.; the California portion which had been contested by Nevada was dissolved into the city of South Lake Tahoe. [3] [6] [7] The currently accepted interstate border is marked by the 1893 US CGS Federal Survey Monuments No. 1, [8] [9] [3] No. 2, [10] [3] and No.3. [11] [3]

There were 510 households, out of which 25.7% had children under the age of 18 living with them, 33.7% were married couples living together, 7.3% had a female householder with no husband present, and 51.8% were non-families. 36.3% of all households were made up of individuals, and 9.2% had someone living alone who was 65 years of age or older. The average household size was 2.38 and the average family size was 3.24.

Stateline has a humid continental climate ( Dsb) with warm to hot summers with cool nights and moderately cold winters with frigid nights.

An express bus runs from the Stateline casinos to Reno-Tahoe International Airport, with adult fares at $32.75 / $59 for one-way / return journeys, available at any casino front desk. Those producing local ID qualify for a 20% discount. A shuttle also runs a circuit from the casinos up Kingsbury Grade and back for a $5 single fare. Seasonal shuttles operate to the ski resorts and casinos from South Lake Tahoe.