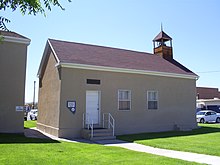 Panaca was southern Nevada's first permanent settlement, founded as a Mormon colony in 1864. [4] It was originally part of Washington County, Utah, but the congressional redrawing of boundaries in 1866 shifted Panaca into Nevada. It is the only community in Nevada to be " dry" (forbidding the sale of alcoholic beverages), [5] and the only community in Nevada, besides Boulder City, that prohibits gambling. [3]

Coke ovens here once produced charcoal for the smelters in nearby Bullionville (now a ghost town), but the town's economy is predominantly agricultural.

The name "Panaca" comes from the Southern Paiute word Pan-nuk-ker, which means "metal, money, wealth". William Hamblin, a Mormon missionary to the Paiutes, established the Panacker Ledge (Panaca Claim) silver mine there in 1864. [6]

The following Nevada historical markers have been placed in Panaca: [7]

Panaca celebrates Pioneer Day on the Saturday closest to July 24. Events include cannon firing at 6 A.M. , games and races, a parade, art displays, and a community dinner. This coincides with the Utah holiday commemorating the arrival of the Mormon pioneers in the Salt Lake Valley. [8] [9]