From Wikipedia, the free encyclopedia
County in the United States
County in Nevada

Washoe County is a county in the U.S. state of Nevada. As of the 2010 census, the population was 421,407, [1] making it Nevada's second-most populous county. Its county seat is Reno. [2] Washoe County is included in the Reno, NV Metropolitan Statistical Area.

Washoe County was created on November 25, 1861, as one of the original nine counties of the Nevada Territory. It is named after the Washoe people who originally inhabited the area. It was consolidated with Roop County in 1864. Washoe City was the first county seat in 1861 and was replaced by Reno in 1871.

Washoe County is the setting of the 1965 episode "The Wild West's Biggest Train Holdup" of the syndicated western television series, Death Valley Days. In the story line, deputy Jim Brand ( Charles Bateman) places a locked chain on a Central Pacific Railroad engine until the company agrees to pay its tax assessment. Roy Barcroft played the aging Sheriff Jackson with Pat Priest as his daughter, N Brand. [3]

In 1911, a small group of Bannock led by Mike Daggett killed four ranchers in Washoe County. [4] A posse was formed, and on February 26, 1911, they caught up with the band, and eight of them were killed, along with one member of the posse, Ed Hogle. [5] Three children and a woman who survived the battle were captured. The remains of some of the members of the band were repatriated from the Smithsonian Institution to the Fort Hall Idaho Shoshone-Bannock Tribe in 1994. [6]

In 1918, Washoe County elected the first woman elected to the Nevada Legislature, Sadie Hurst, a Republican. [7]

As of 2013, "Washoe County is the first school district in the state to offer Paiute classes," offering an elective course in the Paiute language at Spanish Springs High School [8] and North Valleys High School.

There are two incorporated cities within the county, namely Reno and Sparks. In 2010, there was a ballot question asking whether the Reno city government and the Washoe County government should become one combined governmental body. [10] According to unofficial results the day after the election, 54% of voters approved of the ballot measure to consolidate the governments. [11]

The Truckee Meadows of Washoe County starts at the furthest southern runway of Reno Tahoe International Airport, GPS Coordinates 39.468836,-119.770912 and runs south east. Rattle Snake Mountain at Huffaker Park, follows the span of Steamboat Creek to the southern east end of Washoe County. This is the last of the range/prairie and wild grass water shed from the eastern range of the Reno Tahoe basin.

The Demographics of Washoe County covers 6,540.4 square miles. There are approximately 42,154 households in the unincorporated areas with an estimated population of 419,948. The average household size in 2007 was estimated at 2.70. [22] The Truckee Meadows Fire Protection District is charged with fire protection and emergency services.

Washoe County was a Republican stronghold throughout the late twentieth century, having only voted for the Democratic candidate once between 1944 and 2004 (in the 1964 Democratic landslide). Since the 1990s, it has become somewhat more marginal, going from a 22-point win for George H. W. Bush in 1988 to only a three-point win for Bush in 1992. From 1996 to 2004, the Republican candidate tallied a margin greater than four points. Barack Obama won it by a 12-point margin in 2008, and since then, it has always voted Democratic in presidential elections, albeit by relatively narrow margins. However, Republicans still hold most of the county's seats in the state legislature. Democratic strength is concentrated in Reno, while the rest of the county is much more Republican. 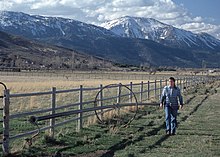