Mesquite is a U.S. city in Clark County, Nevada, adjacent to the Arizona state line and 80 miles (130 km) northeast of Las Vegas on Interstate 15. As of the 2010 census, the city had a population of 15,276. [6] The city is located in the Virgin River valley adjacent to the Virgin Mountains in the northeastern part of the Mojave Desert. It is home to a growing retirement community, as well as several casino resorts and golf courses.

Mesquite was settled by Mormon pioneers in 1880, who called it Mesquite Flat. The community was finally established on the third attempt after having been flooded out from the waters of the Virgin River. The name was later shortened to Mesquite, and the city was incorporated 1984. The community was named for the mesquite timber near the original town site. [7] Mesquite, like nearby Bunkerville, had its origins in farming. The Peppermill Mesquite casino, which opened in the 1970s, drove Mesquite's diversified economy. The city incorporated in 1984 and established a master development plan during the early 1990s. [2] In the mid-1990s, more casinos opened. [8] By 2006, Mesquite was one of the fastest-growing small towns in the United States, though the late-2000s recession led to the closure of the Oasis (formerly the Peppermill) casino. [2]

Interstate 15 passes through the city, leading southwest 80 miles (130 km) to downtown Las Vegas and northeast 39 miles (63 km) to St. George, Utah. Nevada State Route 170 leads south from the center of town, crossing the Virgin River into the unincorporated community of Bunkerville before looping back to I-15 at the western city limits of Mesquite.

The city of Mesquite is a part of the Clark County School District. There are four public schools in the valley. [14]

Mesquite has a public library, a branch of the Las Vegas-Clark County Library District. [15]

The climate of Mesquite is typical of the Mojave desert in which it lies. Short, mild winters prelude a scorching hot summer. Mesquite experiences several winter nights below freezing. December is the coldest month, with an average temperature of 46 degrees Fahrenheit. The trend of December being colder than January is typical of a majority of weather stations on the west coast. A typical winter day starts off around 30 degrees, topping off in the mid-50s to mid-60s in the afternoon. The typical mild pattern is periodically interrupted by Pacific storms systems coming in from the west coast. As such, February is the rainiest month on average, with 1.09 inches of precipitation. Spring is best described as warm, windy, and sunny, with rapidly increasing daylight hours. Pacific storms begin to taper off. Temperatures gradually warm, although spring is noticeably longer than fall. By late May, the normal summertime pattern becomes commonplace. The sun bakes the desert floor and high pressure dominates, although the dry air means evenings are comfortable, even in midsummer. In July, the Arizona monsoon reaches northward, bringing thunderstorms, violent wind, and sometimes hail. July and August bring a secondary precipitation maximum. Although the monsoon takes breaks, sometimes weeks at a time, allowing the summer sun to roast the valley floor. In such a climate, high temperatures above 110 can be expected to occur several times annually. In thermal midsummer, nighttime lows may fail to fall below 80 degrees. The summer heat is tempered by very low humidity. Fall is considered the most pleasant time of year, weather-wise. By early September, the bulk of the summer heat is over, and the nights begin to dramatically cool down faster than the days. A typical September day may bring a high temperature of 90 degrees and a morning low of 60 degrees, leading to pleasant evening temperatures. Like other weather stations in the Mojave desert, October brings the greatest average temperature change of any month. The final 80 degree days are typically encountered in November, leading to the mild winters typical of the Mojave desert.

Like other weather stations in the Mojave and Sonoran desert, the annual temperature cycle is asymmetric, with a seasonal lag of roughly 1 month in summer, and a seasonal lead in winter. The hottest time of the year on average is July 21, with an average high of 106 and low of 72. Conversely, the normal high temp drops to the lowest value of the year, 57 degrees, and low of 28 on December 16, approximately 6 days before the winter solstice. This seasonal lag in summer and seasonal lead in winter can be found in other climate stations in the same region. [16] 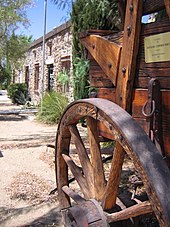 Mesquite is home to several casinos, including the Virgin River Casino, CasaBlanca, Eureka, and Stateline Casino and Motel. The city also includes Rising Star Sports Ranch, a non-gaming hotel and sports facility. [17] The Virgin Valley Heritage Museum has exhibits about area pioneers and local history. The museum building, built in 1940, is listed in the National Register of Historic Places. Mesquite is a stopping point for those traveling along I-15 between Salt Lake City, Las Vegas, and Los Angeles. Mesquite is also a destination for year-round golf, with over nine public courses in the warm desert climate, it draws golfers from all over. Mesquite Airport provides facilities for general aviation and skydiving. [8] It previously hosted the annual RE/MAX World Long Drive Championship until 2015.