Summerlin is an affluent master-planned community in the Las Vegas Valley of Southern Nevada. It lies at the edge of the Spring Mountains and Red Rock Canyon to the west; it is partly within the official city limits of Las Vegas and partly within unincorporated Clark County. This rapidly growing community occupies over 22,500 acres and according to its developers, "has grown to encompass more than 230 parks, more than two dozen public and private schools, 14 houses of worship, nine golf courses, three resort hotels, recreational facilities, retail and entertainment centers, well-established office parks, a medical center, and more." [1]

The community is divided into three associations (North, South, and West), which oversee two dozen commercial and residential villages.

At the time of the 2010 census, Summerlin's population was nearly 100,000, having risen from 59,000 residents in the year 2000. [2] With an average annual household income of $139,061, Summerlin is also one of the most affluent communities in Nevada. [3] The community has received national acclaim for its amenities and quality of life. Notably, it was named the "#1 best place to live and play" by National Geographic Adventure in 2007 and one of the "Best Places to Live in America" by Money Magazine in 2014. [4]

In 1952, the famous film director, aviator, and casino mogul Howard Hughes purchased 25,000 acres (10,000 ha) of land in Southern Nevada, making him the Las Vegas Valley's largest landowner. [5] Despite his initial intentions, he ultimately chose not to relocate his company to Nevada, so the purchased land remained undeveloped and empty for decades. After Hughes died of kidney failure in 1976, the Summa Corporation was organized by his heirs to oversee his vast business empire and land holdings. In 1988, the corporation announced that they would be developing the empty acres of land into a master-planned commercial and residential community. They named the project "Summerlin", after Hughes' paternal grandmother, Jean Amelia Summerlin. [6]

In preparation for this large-scale development, Summa Corporation made a deal with the Bureau of Land Management, in which they traded 5000 acres of environmentally sensitive land for 3000 acres of land better suited for development. After this environmental concern was addressed, development began. By the end of 1990, the construction of Summerlin's first residential village, park, and school had been completed. [6] In 1994, Summa Corporation rebranded itself as the Howard Hughes Corporation and continued to develop new Summerlin villages.

New home construction continued to boom through the turn of the century. From 1997 to 2007, Summerlin was consistently ranked as the #1 community in the nation for new home sales. [6] The Great Recession caused a temporary slow-down in construction, but signs of revival became especially apparent in 2014, when Downtown Summerlin opened, bringing 106 acres of shopping, dining, and entertainment to Summerlin residents. Residential development also saw a great revival following the recession, and by 2016, Summerlin was once again one of the top communities in America for new home sales. [6]

Summerlin is still a growing community. As of 2018, over two dozen commercial and residential villages have been constructed, with over 6,000 acres still available for future development. [6] 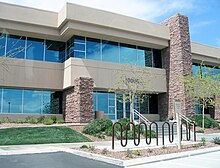 The headquarters for the Howard Hughes Corporation, which owns and maintains the Summerlin master-planned community. 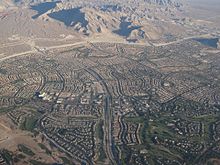 A small section of suburban development in Summerlin.

Associations and their villages

One Queensridge Place, a luxury condominium development just outside of the Summerlin boundaries

The following communities sit adjacent to Summerlin (and in most cases considered part of the "Summerlin area"), but were just not developed by the Howard Hughes Corporation.

Summerlin has a hot desert climate typical of the Mojave Desert in which it lies ( Köppen climate classification: BWh).

Due to its relatively higher elevation, Summerlin is often a few degrees cooler than Downtown Las Vegas and the Las Vegas Strip and may receive slightly more precipitation. Clear skies and sunshine are abundant year-around, with 310 days of sunshine per year and low humidity in every season.

Bicycle lanes are provided on most major roads in Summerlin, as well as in the adjacent Red Rock Canyon National Conservation Area.

The following community parks are owned, maintained, and operated by the Summerlin Council:

Most Summerlin neighborhoods also have small pocket parks that contribute to the extensive Summerlin park system.

The following community pools are owned, maintained, and operated by the Summerlin Council:

The following community pool is maintained and operated by the City of Las Vegas:

In addition, the family-friendly Wet'n'Wild Las Vegas water park opened in 2013. The park boasts more than 25 water slides and attractions and is accessible to both residents and visitors.

As of 2018, the Summerlin Trail System is more than 150 miles long and connects local neighborhoods to various amenities throughout the community. [10] The system includes five types of planned trails: street-side, village, bike, regional, and natural.

Upon completion, the trail system will be more than 200 miles long and will connect to more than 2,000 miles of regional trails, making it one of the most comprehensive and efficient trail systems in the southwestern United States.

In 2008, Summerlin and the Howard Hughes Corporation received the American Trails Developer Award, which is given to developers in recognition of "quality, well designed multi-use trails systems that are integrated into private developments." [11]

The adjacent Red Rock Canyon National Conservation Area offers 26 hiking trails (ranging in difficulty from easy to strenuous). The canyon is also suitable for bouldering and rock climbing and has an overnight camp site. [12]

Downtown Summerlin is the community's premier shopping, dining, and entertainment district. It hosts over 125 shops, bars, and restaurants.

The Summerlin community also has several strip mall–style shopping centers, which include:

Summerlin is also home to the Element Las Vegas (a Westin Hotel), which offers guest accommodations, but does not include casino games, entertainment, or spa services.

The Summerlin Hospital Medical Center, a private hospital operated by the Valley Health System, provides 485 beds to the local community. It is an accredited Chest Pain Center and Primary Stroke Center. Other notable features include: the Children's Medical Center, the Breast Care Center, the Cancer Center, the Rehab Center, and the Robotic Surgery Center. The Summerlin Hospital is also recognized by the Healthcare Equality Index as a "Leader in LGBT Healthcare Equality." Its 40-acre campus is located in The Crossings village of Summerlin North. [14]

The Southern Hills Hospital Medical Center is located just outside the boundaries of Summerlin South, in the nearby Spring Valley. This private hospital, operated by Sunrise Healthcare System, provides 186 beds to the Summerlin community. It is an accredited Chest Pain Center and Primary Stroke Center, and was named the Best Hospital in Las Vegas in 2015, 2016, and 2017. [15]

Public schools in Summerlin belong to the Clark County School District, which serves almost all of Southern Nevada.

In addition to the above-listed public schools, some Summerlin residents may be zoned for schools located just outside of the Summerlin boundaries (many families in Summerlin South, for example, are zoned for Durango High School in nearby Spring Valley). [16]

Summerlin is also home to several private schools, including:

Higher education within the community of Summerlin is mostly limited to small satellite campuses, including:

However, Summerlin is also located within 10 miles of the College of Southern Nevada's main campus (CSN - Charleston), within 20 miles of the University of Nevada, Las Vegas (UNLV), and within 30 miles of Nevada State College (NSC).

Summerlin has a public library, a branch of the Las Vegas-Clark County Library District. [17]

The Summerlin Red Rocks FC is a popular amateur soccer league in the area.

The following is an incomplete list of some of Summerlin's most notable residents: