The first inhabitants of what is now Enterprise would have been the Paiute Indians, who were spread across the Las Vegas Valley. In 1905, the railroad town of Arden was formed for miners who worked at the nearby gypsum mines just west of the area. [3] The area was part of Lincoln County until 1909, when Clark County was split off from Lincoln County. [4] The oldest structure in the area is a water tower, which was built in 1926. [5]

References to the area as "Enterprise" date back to at least 1918, when county commissioners established an Enterprise school district. [6] According to one historian, the word may simply have been chosen at that time as a positive-sounding name. [7]

Enterprise was formed as an unincorporated town on December 17, 1996, in response to a petition from residents who hoped it would help preserve the community's semi-rural identity. [9] This was made to prevent annexation by nearby Henderson. [10] Immediately afterwards, Clark County commissioners voted to annex about five square miles of land into neighboring Spring Valley that included the master-planned community of Rhodes Ranch and a regional park. The annexation plan was developed by commissioner Erin Kenny. The vote was almost unanimous, with the sole exception of Bruce L. Woodbury voting against annexation. The chairwoman of the county commission, Yvonne Atkinson Gates, was against the annexation, but voted for annexation anyway because she wanted to recall the situation after the next advisory board meeting in January 1997. Residents, both governmental and non-governmental, opposed the annexation because they had no say in the vote. [9]

On January 19, 1999, an interlocal agreement was approved by the Clark County Commission and the Henderson City Council to annex about 5,000 to 6,000 acres of land into the City of Henderson, with most of the land belonging to the Bureau of Land Management southwest of the master-planned community of Anthem, but also including 1,400 acres that were part of Enterprise. [11] [12] The city wanted to annex land so it could have an exit on Interstate 15 (specifically the Sloan exit [12]), and so they could maintain Lake Mead Drive (now St. Rose Parkway). Residents of Enterprise did not approve of the annexation plan because they wanted to preserve their rural lifestyle. County commissioners told some residents that the county could not stop Henderson from annexing a piece of their town, and said that the interlocal agreement was the best they could do. [11] This agreement stopped Henderson from annexing section 33 (which was a heavily populated section of Enterprise), and instead annex sections 26 and 34, which were, at the time, undeveloped. [11]

According to the United States Census Bureau, the census-designated place (CDP) of Enterprise (which may not coincide exactly with the town boundaries) has a total area of 46.51 square miles (120.5 km2). Enterprise is the location of the Mountain's Edge planned community and Southern Highlands. Enterprise is bordered by Spring Valley to the north, Paradise to the east, Henderson to the southeast, Sloan to the south, and Blue Diamond to the west. Enterprise's main northern boundary is with Sunset Road, mainly Bermuda Road to the east, St. Rose Parkway to the southeast, and mainly the Union Pacific Railroad tracks to the southwest.

As an unincorporated town, Enterprise is governed by the Clark County Commission, with input from the Enterprise Town Advisory Board. Enterprise is part of the Las Vegas Township.

Policing is provided by the Enterprise Area Command of the Las Vegas Metropolitan Police Department. [13]

The Silverton and the South Point Hotel, Casino & Spa are the only casino resorts located in Enterprise. Town Square Las Vegas, previously the location of the Vacation Village hotel and casino, is another major attraction that falls within the boundaries. Las Vegas Premium Outlets South, the southern counterpart to Las Vegas Premium Outlets North, is another attraction in Enterprise. The economy of Enterprise employs 66,636 people. The economy of Enterprise is specialized in Arts, Entertainment, Recreation; Accommodation & Food Service; and Real Estate, Rental & Leasing, which employ respectively 5.14; 2.95; and 1.67 times more people than what would be expected in a location of this size. The largest industries in Enterprise are Accommodation & Food Service (15,756), Arts, Entertainment, Recreation (7,782), and Retail trade (7,486), and the highest paying industries are Management of Companies & Enterprises ($193,833), Mining, Quarrying, Oil, Gas Extraction( $78,750), and Utilities ($67,273). [24]

The Ultimate Fighting Championship (UFC) opened the UFC Performance Institute in Enterprise in 2017, listing the new location as the organization headquarters. [25] [26] [27] In June 2019, the company opened the UFC Apex across the street, which is being used to host US events during the COVID-19 pandemic. [28]

Public education in Enterprise is administered by the Clark County School District. [29]

Enterprise has two public libraries, Enterprise Library, and Windmill Library, both branches of the Las Vegas-Clark County Library District. [30] The latter serves as the headquarters for the LVCCLD. [31] 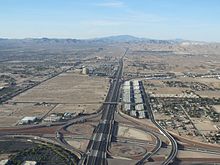 The following are all the major highways in Enterprise.

This is an incomplete list of notable residents in the Enterprise area.