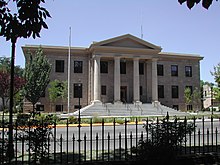 Ormsby County, Nevada was a county of Nevada from 1861 until 1969. It contained Carson City, the county seat, and later, the state capital, founded two years earlier. It was named after Major William M. Ormsby, one of the original settlers of Carson City, killed along with seventy-five other white men in 1860, in an unsuccessful attempt to subdue a perceived uprising of Paiute Indians near Pyramid Lake, Nevada, which was at the time part of Utah Territory.[ citation needed]

The county's population dwindled significantly after the gold rush days. By the late 1940s, it was little more than Carson City and a few surrounding hamlets to the west. Discussions began about merging Carson City with Ormsby County. However, the effort never got beyond the planning stages until 1966, when a statewide referendum formally approved the merger. The required constitutional amendment was passed in 1968. On April 1, 1969, Ormsby County and Carson City officially merged as the Consolidated Municipality of Carson City. [1]