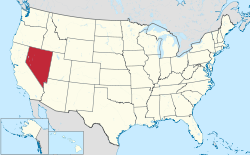 Map of the United States with Nevada highlighted

Incorporated places in the state are legally described as cities, except for the state capital Carson City, which has no legal description but is considered an independent city as it is not located in any county. [2] To incorporate, a petition for incorporation can be made to the board of county commissioners, who consider numerous geographic, demographic, and economic factors. [3] Cities are categorized by population for the purpose of determining the number of wards and council election structure as well as the number of city clerks: cities with 50,000 or more inhabitants are in population category one, cities with 5,000 or more but fewer than 50,000 inhabitants are in population category two, and cities having fewer than 5,000 inhabitants are in population category three. [3] Cities are responsible for providing local services such as fire and police protection, road maintenance, water distribution, and sewer maintenance. [3]