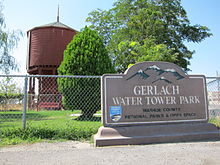 The water tower in Gerlach is listed on the National Register of Historic Places.

Gerlach, Nevada is a census-designated place (CDP) in Washoe County, Nevada, United States. The population was 107 at the 2018 American Community Survey. [2] It is part of the Reno– Sparks Metropolitan Statistical Area. Prior to 2010, Gerlach was part of the Gerlach–Empire census-designated place. The town of Empire is now a separate CDP. The next nearest town, Nixon, is 60 miles (100 km) to the south on a reservation owned by the Pyramid Lake Paiute Tribe. The Fly Geyser is located near Gerlach.

The economy of Gerlach focuses on tourism in the nearby Black Rock Desert, and hunting. Gypsum mining was the historic staple of the local economy. Nearby Empire was a company town of the United States Gypsum Corporation (USG) until the plant closed on January 31, 2011, eliminating 95 jobs. [4] [5] In 2016, the town of Empire was purchased by the Empire Mining Company, who have re-opened gypsum mining operations, and have begun to rehabilitate the houses in town. [6]

The other major industries are a Union Pacific switching station in Gerlach and public services of Washoe County, which includes its roads department and a K–12 public school owned by the Washoe County School District; the future of the Gerlach K–12 School is uncertain, as it is estimated after the gypsum plant closed in 2011, only around a dozen children remained in Gerlach. [4] Many of the inhabitants of Gerlach are elderly retirees. Many people in Gerlach also have small private businesses. Many businesses are Internet-based, due to the town's remote Nevada location. Hunters from all over the west travel to Gerlach to hunt a wide variety of game such as chukar, geese, deer, antelope, etc.

Since 1990, Burning Man, a week-long countercultural festival with a population of 68,000 [7] (as of 2013 [update]), has been held nearby. The event is responsible for around 25% of the yearly sales at the few commercial establishments in the area, which include the closest permanent fuel and grocery stops to the Burning Man event site. The Black Rock Desert is also the site of many other recreational activities throughout the year. [8]

Gerlach was founded in 1906 [9] during the construction [10] of the Feather River Route of the Western Pacific Railroad.

In 2009, the Space Chair was lofted to near space north of Gerlach.

Gerlach has an airfield, simply a graded dirt strip, which is no longer usable. It should not be used unless under emergency.

The California Zephyr inter-city rail service was routed through Gerlach from its inception in 1949 until the end of its pre- Amtrak incarnation in 1970, providing direct service from Oakland, California to Chicago.

Gerlach was one of the film locations for the film Far From Home (1989). Gerlach was also the site for Gary Cooper's first (credited) film, The Winning of Barbara Worth (1926). [11]

Gerlach has two non-profit community-based radio stations. KFBR 91.5 [12] is run by Friends of Black Rock/High Rock, [12] and has a studio at Jalisco's on Main Street. KLAP [13] 89.5 is run by Open Sky Radio Corp and broadcast from a studio located at 395 Main Street in the old Gerlach Gas Station and Garage Building Office. [14]

Gerlach has a public library, a branch of the Washoe County Library. [15]