Eureka is an unincorporated town and census-designated places in and the county seat of Eureka County, Nevada, United States. [1] [2] With a population of 480 as of the 2018 American Community Survey 5-Year Estimates, [3] it is by far the largest community in Eureka County. Attractions include the Eureka Opera House (built in 1880 and restored in 1993), Raine’s Market and Wildlife Museum (built 1887), the Jackson House Hotel (built 1877), and the Eureka Sentinel Museum (housed in the 1879 Eureka Sentinel Newspaper Building).

Eureka is part of the Elko Micropolitan Statistical Area.

Under the Köppen climate classification, Eureka has a warm-summer humid continental climate (Dfb). 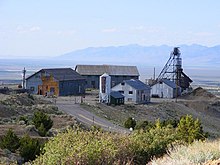 The historic Richmond Mine, one of the two major lead-silver mines in Eureka

The town was first settled in 1864 by a group of silver prospectors from nearby Austin, who discovered rock containing a silver-lead ore on nearby Prospect Peak. According to tradition, the town was named from an incident when a prospector exclaimed " Eureka!" when he discovered deposits of silver ore. [8] The town became the county seat in 1873, when Eureka County was carved out of adjacent Lander, Elko, and White Pine counties.

Mining, especially for lead, was the town's economic mainstay, [9] as the nearby hillsides ranked as Nevada's second-richest mineral producer, behind western Nevada's Comstock Lode. Two of the largest concerns in Eureka were the Richmond Mining Company and the Eureka Mining Company. These two companies often collided, and in one instance, their litigation reached the U.S Supreme Court. [10] The population boomed, reaching a high of 10,000 by 1878, but shrank as decreasing mine production and changing market conditions led to the closing of mines.

The town was serviced by the narrow gauge Eureka and Palisade Railroad from 1873 to 1938.

Eureka is served by an all-volunteer fire department, which provides fire protection, rescue, and vehicle rescue services for Eureka and the surrounding areas. In 2009 a new brick and steel fire house was built on Main Street in Eureka. At the time of its building it was the second largest fire house in the state. In addition to being a modern fire fighting facility, it contains a museum of Eureka fire department equipment and vehicles dating back to the 1870s. The fire-museum may be viewed through the large glass windows, or a tour may be taken by contacting a local fireman.

The 1876 Eureka Court House is both historic and modern. It stands as the functioning governmental and legal center of Eureka County.

Eureka has a public library, a branch of the Elko-Lander-Eureka County Library System. [12]