A post office has been in operation at Alamo since 1905. [3] The community was named in commemoration of the Battle of the Alamo. [4] A large share of the first settlers were Mormons. [5]

Alamo lies in the Pahranagat Valley. Its economy is dependent primarily upon ranching. The closest attraction is the Pahranagat National Wildlife Refuge. [6]

Between Alamo and the town of Rachel is the site of the Devonian Alamo Impact Breccia. [7] 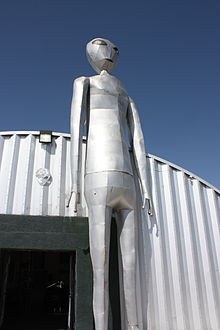 Alamo attracts tourists and truckers traveling from Las Vegas to northern Nevada and Idaho. Attractions include the nearby warm springs, wildlife refuge, Extraterrestrial Highway and Area 51. Gas stations in Alamo cater to these tourists by offering alien memorabilia. There are two truck stops, the Alamo Sinclair, the Ash Springs Shell, that offer large diesel filling areas to attract passing truckers. There are also four motels in Alamo, the Alamo Inn, Sunset View Inn, Windmill Ridge, and A Cowboy's Dream.

Public education is provided by the Lincoln County School District, with offices in Panaca, Nevada. There are three schools in the valley.

There are three different religious denominations with churches in Alamo:

Alamo has a police force, a volunteer fire department, phone and internet services, a medical clinic, and a public library. Nevada Bank and Trust offers financial services to residents. Alamo's first radio station, KQLN 91.3 FM, went on the air on November 17, 2010, but the station's license was cancelled at licensee's request, effective on July 2, 2013.

Alamo, Nevada, with an average annual temperature of 56.7 Fahrenheit, has a cold-desert climate (Koppen BWk). Although it is technically a cold desert, the town lies in the middle of the climatic transition zone between the hotter, lower Mojave desert to the south, and the colder, higher Great Basin desert to the North. It exhibits characteristics of both deserts, such as scorching summers (July afternoon maxima average around 100 F), large diurnal temperature range year round, and snow at least once a year. December and January record highs are within 2 degrees of Las Vegas. Unlike Las Vegas, summer nights are comfortable, even cool, having the ability to dip below 60, even in thermal midsummer. This is due to a lack or urban heat island, location in a valley, dry air, and clear skies typical of a summer day.

December and January are the coldest months, and are climatologically equivalent in terms of temperature records. Beginning in early March, the days begin to warm noticeably along with rapidly increasing day length. Nights remain cold to cool throughout spring. By late April, afternoon highs are warm and comfortable, perhaps a misleading prelude to the scorching hot summers. Because it is located in the Mojave desert, most annual precipitation occurs from the passage of fronts originating from the Pacific. These storms usually arrive by November, and taper off by April or May. The first hot days, with afternoon maxima over 90, typically occur by early May and maxima over 100 by early June. The annual temperature increases most rapidly during April and May. By June, the typical summer pattern dominates. Clear skies, blazing sunshine, and low humidity describe most days. Very hot days are tempered by the low humidity, and almost always the Heat Index is lower than the air temperature. July is the prototypical summer month, exhibiting long, hot days, clear skies, and rapidly plummeting temperatures after sunset. This summer pattern holds at least until late August. The pattern is, however, occasionally interrupted by rain and thunderstorms due to the yearly occurrence of the Arizona monsoon, which usually arrives by early July. The Arizona Monsoon is an annual shift in wind direction, pulling moisture into the Sonoran and Mojave deserts, even as far west as California's Central Valley, and as far north as Salt Lake City. High winds, lightning, flooding, and hail are potential hazards during the summer months. The Arizona Monsoon explains the secondary precipitation maximum.

By September, the climate system suffers a net energy loss due to the decreasing solar zenith angle, the nights become colder than the days heat up; the first signs of fall begin. Most noticeable is the nights transition from comfortable to cool or even cold (<50 F). Moisture associated with the Arizona monsoon usually ends by mid-September. October brings warm days, cool to cold nights, and shorter days. Temperatures climatologically drop the most in October, both temperature averages and extremes. By November, the days are still comfortable, yet cool, and Pacific storms begin to make their annual appearance. Late November into early December winter holds its grip until next February at least, when the cycle repeats itself. Unlike towns further north, such as Ely, winters are mild to cool, and sub-zero temperatures are almost unheard of. This is a testament to Alamo occupying the climatic transition zone between the Mojave and Great Basin Deserts.