The Hopi Reservation is a Native American reservation for the Hopi and Arizona Tewa people, surrounded entirely by the Navajo Nation, in Navajo and Coconino counties of Arizona, United States. The site in north-eastern Arizona has a land area of 2,531.773 sq mi (6,557.262 km²) and as of the 2000 census had a population of 6,946. The Hopi Reservation, like most of Arizona but unlike the surrounding Navajo Nation, does not observe daylight saving time. Until recently, the two nations shared the Navajo–Hopi Joint Use Area. The partition of this area, commonly known as Big Mountain, by Acts of Congress in 1974 and 1996, has resulted in continuing controversy. [2] [3]

The system of villages unites three mesas in the pueblo style traditionally used by the Hopi. Walpi is the oldest village on First Mesa, having been established in 1690 after the villages at the foot of mesa Koechaptevela were abandoned for fear of Spanish reprisal after the 1680 Pueblo Revolt.[ citation needed]The Tewa people live on First Mesa. Hopi also occupy the Second Mesa and Third Mesa. The community of Winslow West is off-reservation trust land of the Hopi tribe.[ citation needed]

The Hopi Tribal Council is the local governing body consisting of elected officials from the various reservation villages. Its powers were given to it under the Hopi Tribal Constitution.[ citation needed]

The Hopi consider their life on the reservation (in particular the traditional clan residence, the spiritual life of the kivas on the mesa, and their dependence on corn) an integral and critically sustaining part of the "fourth world".[ citation needed][ clarification needed]

Hopi Radio, a station with a mix of traditional Hopi and typical American programming is run for the reservation and provides internships for Hopi High School.[ citation needed] 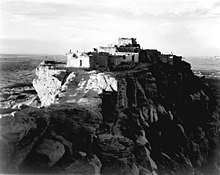 Walpi and First Mesa in 1941 (photo by Ansel Adams)

Aerial views looking north along the central three of the reservation's five major washes, [4] from west to east: